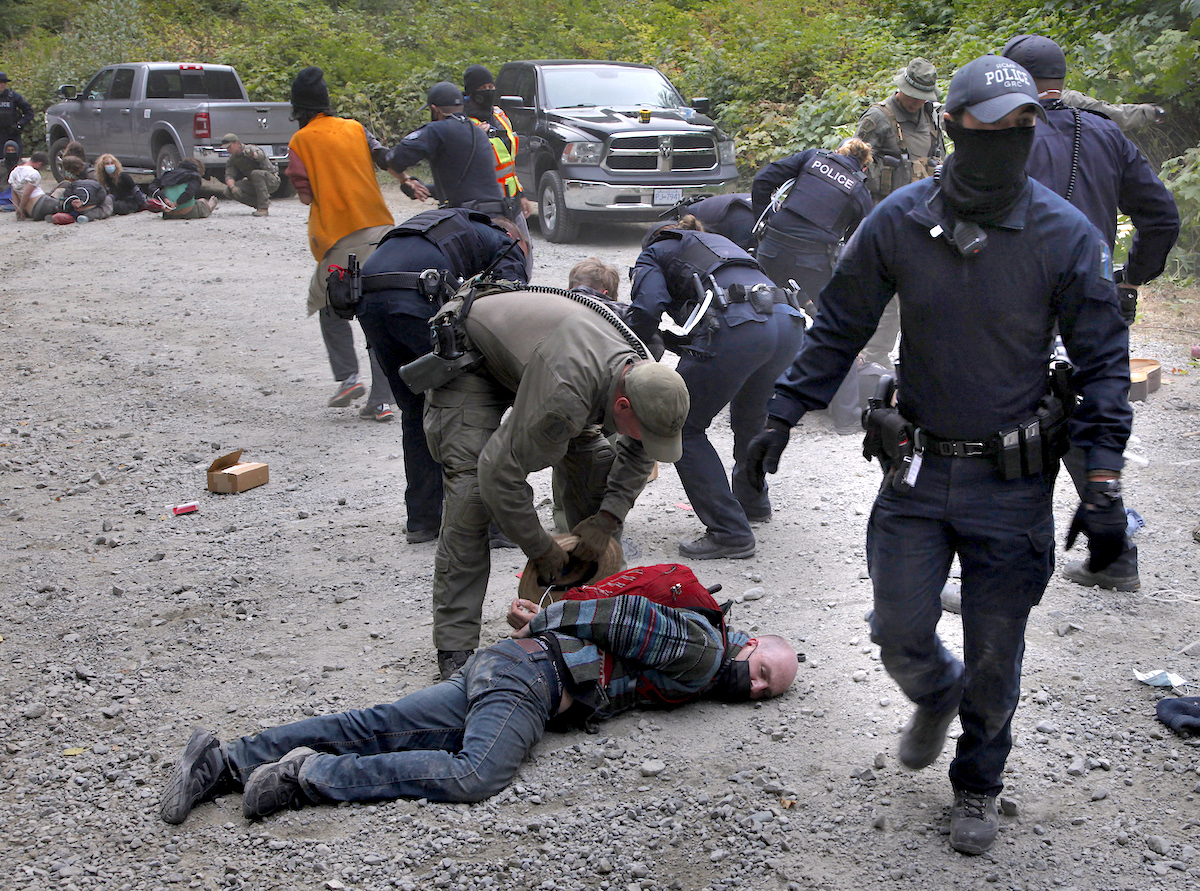 At least one police officer joined protesters, journalists and politicians raising alarm bells over RCMP enforcement tactics during the peak of conflict at the Fairy Creek old-growth blockades in B.C. during the summer of 2021.

The officer, a former member of the RCMP’s specialized team that deals with resource extraction protests, resigned from the task force over concerns about “unjustifiable” police behaviour during an August crackdown on activists, a freedom-of-information (FOI) request shows.

The resignation from the RCMP’s controversial Community-Industry Response Group (C-IRG) came in an email dated Sept. 5, 2021, after the officer, with 13 years of experience, was sent to the long-running protest in the Port Renfrew area on southeastern Vancouver Island.

The officer, whose name was redacted, remains a member of the RCMP, according to FOI documents obtained by freelance photographer Jen Osborne, who works with Canada’s National Observer.

After he left the task force, the officer wrote a report outlining his concerns over some tactics used to enforce a court injunction against the August blockades.

Officers wore thin blue line patches, were ordered to remove their name tags and socialized inappropriately with Teal Cedar workers and members of the forestry company’s private security force, he added. The company, a subsidiary of Teal Jones, secured a court injunction to halt the blockades in its logging licence area.

“Jokes and stories about ‘fucking hippies’ and how much they stink were common.”

The officer said he wasn’t privy to all the reasons for the decisions made at the blockade.

A member of RCMP’s controversial Community-Industry Response Group (C-IRG) resigned from the unit over concerns about “unjustifiable” police behaviour during a crackdown on Fairy Creek old-growth activists, a freedom-of-information request shows.

“That being said, I saw enough to know that I did not want to be involved and actions were certainly a departure from what we practise at our home detachments.”

The concerns raised by the officer mirror long-standing complaints by legal and rights groups, journalist associations and activists about the RCMP’s policing of dissent tied to resource extraction industries, especially when dealing with Indigenous Peoples. Criticism of the C-IRG in particular isn’t limited to Fairy Creek and includes the unit’s role at pipeline protests in Wet’suwet’en territory and more recently, logging protests near Argenta in the B.C. Interior.

The officer’s first report entry notes his arrival at the Fairy Creek blockade’s Mesachie Lake camp for a briefing by outgoing officers the day after a highly publicized incident between the RCMP and protesters where officers used pepper spray and force to break up and arrest protesters on Aug. 21, 2021.

Numerous videos of the incident surfaced on the internet showing RCMP officers emptying large canisters of pepper spray into people’s faces at close range and forcefully pushing and pulling to break up a blob of protesters, who’d grouped together and linked arms to make their arrests more difficult.

In some videos, an officer in a green uniform can be seen pulling COVID-19 masks off protesters. In other instances, people being arrested had their backpacks cut off or removed by officers, who then threw the bags to the side of the road.

The pepper spray incident was a flashpoint of public concern, with protesters alleging regular use of excessive force by police, federal politicians calling for investigations and a slew of complaints filed with the Civilian Review and Complaints Commission (CRCC), the federal oversight body for the RCMP.

The month before, the B.C. Supreme Court roundly condemned the RCMP for violating Charter rights and freedom of the media because police used vast exclusion zones, checkpoints and other measures to restrict the movement and ability of journalists reporting on the blockade. Media and public access to the injunction area continued to be highly controlled by police during the course of the blockade, with RCMP citing civilian and officer safety as the reasons.

The resigning C-IRG officer said during his initial briefing the day after the pepper spray incident, two officers reported smashing car windows to clear vehicles that remained parked in a gravel pit and along the Granite Main Road to make sure no one was inside.

“In my 12-plus years of service, I have never done this. I do not agree this was necessary,” the officer wrote in his report.

In another instance at the blockade’s Red Dress Camp, the C-IRG member described the improper handling of both personal property and arrestees after protesters blocked Granite Main Road.

A woman lying on the ground with her backpack was refusing to walk to a police vehicle, the officer’s report said. An officer, whose name and rank are redacted, told her if she got up and walked to the car, she could keep her belongings, but if not, they’d be thrown in the garbage.

When she refused to comply and police carried her away, the C-IRG member picked up the backpack and informed her he would give it to a friend to keep.

But the other officer involved took away the backpack, said no to the plan and threw it into the back of a police truck. It’s not clear where the backpack went or if it was ever returned to the owner, the officer reported.

“I understand the difference between abandoned property and personal property,” the officer said.

“The backpack was not abandoned and should have been given to the owner upon release.”

He also referred to following up on a later complaint from a blockade organizer about backpacks going missing.

“I spoke with two different Teal Cedar workers who said all the backpacks they received from the RCMP were being thrown out.”

Eight people were arrested and placed into two police vans for transport while the officer was on site. The officer was driving one van with four male occupants, while the other was transporting the women in custody.

He and the other driver were told to release all those arrested without charges — but rather than transport them to nearby Port Renfrew, they were directed to take them to Lake Cowichan, about an hour’s drive away.

“The reasoning was to make it harder and more inconvenient for them to return than simply taking them out of the injunction area,'' the officer wrote.

“Holding someone in custody to make things more inconvenient and driving them down the highway when they are to be released without charges is not justifiable.”

The officer said he’d talked to another officer in a separate instance who’d also been told to drive a detainee to Duncan, a full two hours away from the injunction area.

Questions on impartiality and inappropriate conduct

A member of the C-IRG since 2021, the officer noted he’d been formerly deployed to Houston, B.C., on three separate occasions in 2019 and 2020 during RCMP enforcement of court injunctions tied to the years-long blockade and protest activities by hereditary Wet’suwet’en chiefs and their allies to halt construction of the Coastal GasLink natural gas pipeline.

“When I was in Houston, we were given fairly clear directions that we were not to be visiting and chatting with CGL security or workers,” he said, noting the need to remain impartial.

The member also worried that officers didn’t respond in a timely way to Fairy Creek protesters’ allegations that industry workers were threatening them.

The officer said he witnessed protesters approach police three times to report threats by an industry worker, noting they had video proof and the alleged offender was in the area. But they were told to make a report at the nearest police detachment an hour away, he added.

“It is obvious this can result in a loss of evidence and does not show that we are impartial,” he said.

“This also leaves a person who uttered a threat in the same area as the victim with no conditions.”

RCMP members were ordered to remove name tags and given controversial thin blue line patches to wear on duty, the officer said.

The patch, which shows a Canadian maple leaf with a blue line through the middle, is reportedly a symbol of solidarity between police officers. But the image is opposed by numerous civilian groups and political fronts — such as the Indigenous Land Back and Black Lives Matter movements — which argue it conveys division, colonialism and racism, particularly given the symbol has been appropriated by white supremacists. Numerous police forces, including the RCMP, have directives not to wear the insignia but have faced pushback from officers and unions.

The officer witnessed a box of the patches at Fairy Creek, and the insignia was handed out to police, he said.

“We were told the blue line patches piss off the hippies, so wear them,” he said, adding one officer had three of them on his uniform.

A total of 250 police complaints related to the Fairy Creek blockades have been filed with the Civilian Review and Complaints Commission (CRCC), the federal independent oversight agency said Wednesday. Of the total, 108 met the commission’s mandate and are subject to an RCMP investigation, and potentially a CRCC review if complainants aren’t satisfied with police findings.

RCMP spokesperson Sgt. Chris Manseau confirmed C-IRG leadership and the RCMP professional standards unit were informed of the allegations made by an officer tendering a resignation from the task force.

“The matter was not pursued by the member who made the allegations, and they later volunteered again to deploy to Fairy Creek, as a non-CIRG officer,” Manseau said in an email.

C-IRG leaders provide clear direction that officers are expected to remain impartial when dealing with all individuals at protests, he said.

Officers can choose not to wear their numbered badge because several members have been targeted and harassed online, himself included, when their names are provided, Manseau said.

Blue line patches were worn at the beginning of enforcement at the blockade. But the practice stopped shortly after it was determined the public viewed it negatively and the RCMP commissioner provided clear direction on the patches, he added.

People taken into custody were transported to the nearest RCMP detachment, Manseau said, noting the measure wasn’t intended to be punitive or burdensome.

Complaints were coming from Port Renfrew about the number of people being released into the small community, he said.

“Our enforcement actions are well-documented, including the use of body-worn cameras, which we are prepared to disclose as part of evidence in criminal proceedings, or as part of a complaint process.”

Deeply disturbing. Instead of

Deeply disturbing. Instead of celebrating people sacrificing to save the planet, they're criminalized and mistreated by the RCMP. We must make this stop.

The police and Teal-Jones

The police and Teal-Jones like to demonize activists, calling them anarchists and hippies, which plays well with the public. My husband and I (ages 70), met lots of the kids at Fairy Creek. We were impressed with their dedication and determination. Oh and none of them smelled bad.