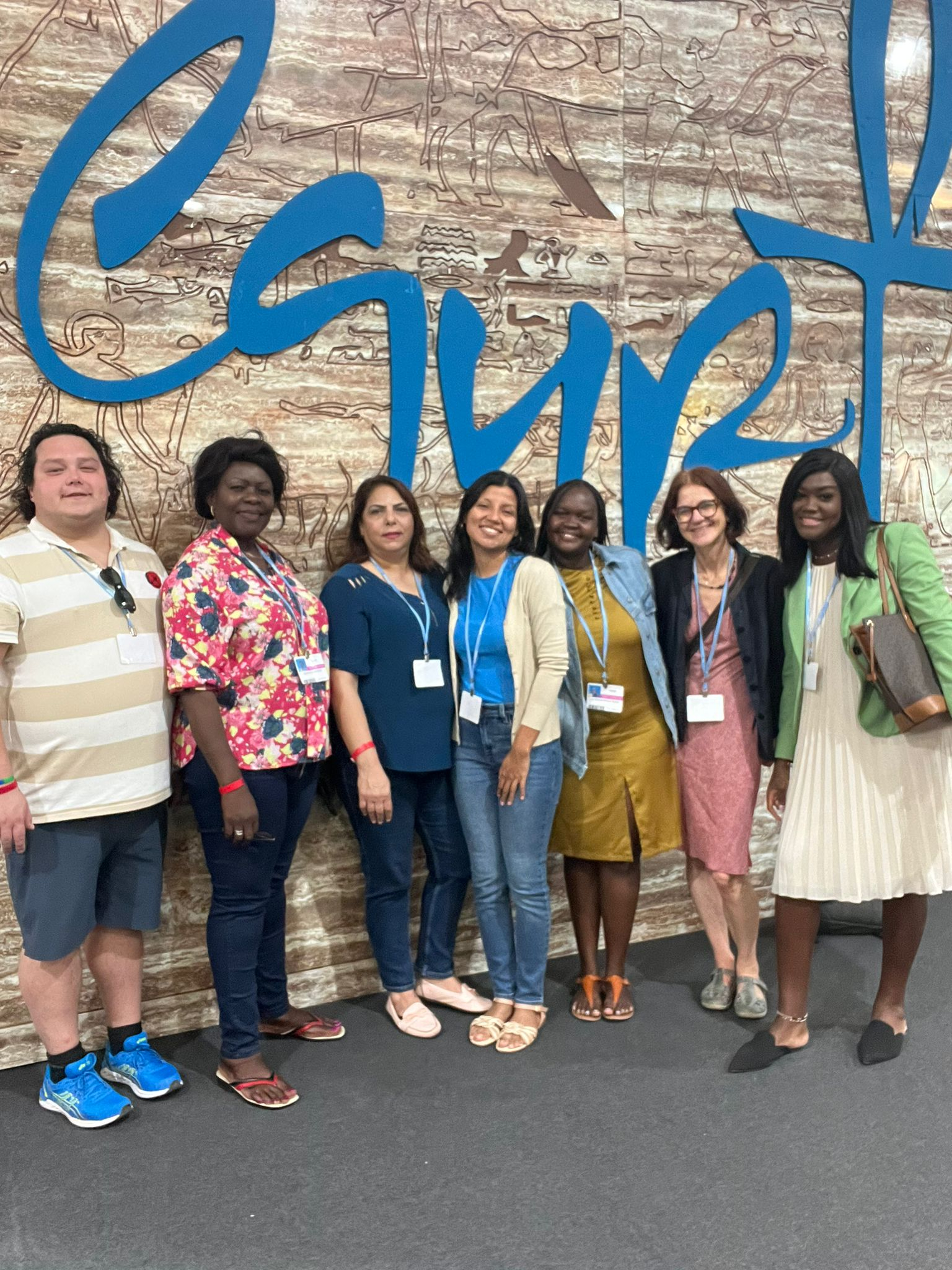 Chantal Bilulu (second from the left) and Radia Mbengue (far right) stand in front of the COP27 sign in Sharm el-Sheikh, Egypt. They were part of a 10-member delegation sponsored by KAIROS Canada and For the Love of Creation. Photo by KAIROS Canada
Previous story

The climate crisis is caused primarily by the burning of fossil fuels. Yet some of the key culprits — oil and gas — were glaringly absent from the final agreement of the UN’s 27th climate conference held in Sharm el-Sheikh in November. Gender and racial equity were also missing at COP27. This isn’t a coincidence.

Sharm el-Sheikh was no different. Of the 110 world leaders who attended, only seven were women. However, gender is not the only factor at play. While young African female activists struggled to be accredited at the so-called #AfricanCOP, 636 representatives from the fossil fuel industry were welcomed.

This access barrier is also evident at the COP15 biodiversity summit, where Canada rejected visas for some Global South activists who wanted to attend and where Indigenous leaders have been calling for greater Indigenous participation and leadership in decision-making.

“Race, ethnicity and national origin continue to result in the unjust enrichment of some, and the utter exploitation of others on account of the discrimination at the core of environmental and climate injustice,” said E. Tendayi Achiume, UN special rapporteur on contemporary forms of racism.

The absence of African women and African Indigenous communities at COP27 decision-making tables is a prime example. We need to lift these voices because African women play key roles in mitigating the climate crisis. In the Democratic Republic of the Congo (DRC), for example, women engage in regenerative agricultural practices, which have economic and ecological benefits such as income generation, improved food security and climate mitigation. Regenerative farming draws carbon from the atmosphere and stores it in the soil.

African Indigenous communities also live in sensitive ecosystems, using natural resources for pastoralism and foraging. The Congo Basin rainforest, for example, absorbs about 1.5 billion tonnes of CO2 annually, making it an important ecosystem in C02 mitigation strategies. The sustainability of Africa is seriously jeopardized by the deterioration of these ecosystems.

Indigenous communities are adept at sustainable practices, sometimes developed over thousands of years, making them essential players in decarbonization and adaptation measures.

However, rather than prioritize this knowledge and expertise, climate COP negotiators sideline them.

African and Indigenous women are disproportionately feeling the brunt of the climate crisis, and youth are staring into a stark future. We need meaningful action now during this critical decade.

Today, in the DRC — like other places in the Global South — women plant food, but because of too much rain or too little, they have very little to show for their efforts.

Today, Indigenous peoples are often violently removed from their lands to make way for carbon credit schemes such as monocrops, for mining of minerals for electric vehicles, or for protected areas and national parks that assume the land is better off without people — even those who know how to sustainably manage it.

Today, many land and water defenders, particularly racialized and Indigenous women, are harassed, harmed or killed for speaking out against environmental destruction in their communities, including by Canadian mining operations.

These examples and the dependency on fossil fuels are colonial practices. Colonization has gotten us into this climate crisis. Decolonization will help us get out of it. We can start by supporting an Indigenous and African decision-making approach to climate adaption. We must ensure that Global South and Indigenous communities, particularly women, lead and participate in climate-related decision-making spaces, including the new loss and damage fund that was finally launched at COP27.

These spaces must be accessible, including accommodation for local languages, which offer a powerful means to share ancestral knowledge about climate and environmental protection.

Carbon credit schemes must be discontinued, and any “nature reserves” must be returned to Indigenous and local communities to better manage them and sustain themselves.

Canada can play a critical role by committing to fully phase out all fossil fuels by 2050. Canada can also lead by offering grants-based climate funding that builds capacity and expands the influence of Indigenous and Global South grassroots women’s organizations and movements in an integrated, feminist global approach to the climate crisis, peace and security.

It’s time Canada and the world address the root causes of the climate crisis, and recognize the agency of Indigenous and African women and provide them greater space.