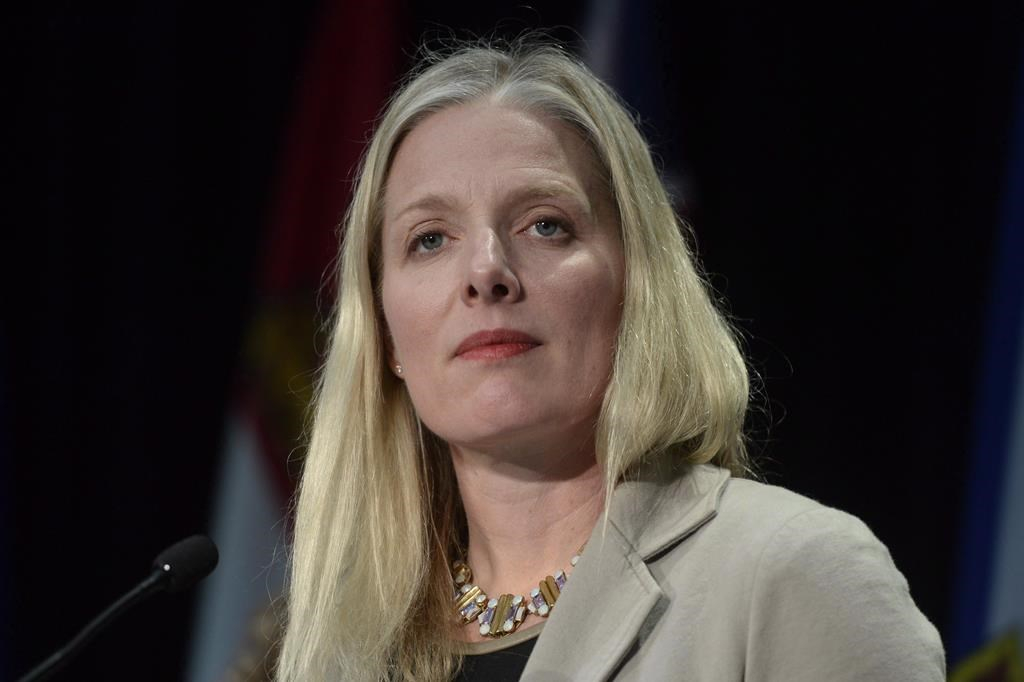 Environment Minister Catherine McKenna is being sued for failing to tell Canadians how the country's woodland caribou are being protected.

The Canadian Parks and Wilderness Society filed an application for judicial review in Federal Court in Montreal today.

Lawyer Frederic Paquin told a news conference in Montreal that the Species at Risk Act requires the environment minister to "form an opinion about whether or not the critical habitat of the woodland caribou is protected."

"She was supposed to form that opinion more than four and a half years ago and she failed to do so," said Paquin. "She is quite late."

The original failure to report occurred under the previous government, but there have also been no reports since the Liberals and McKenna took office in 2015.

The woodland caribou habitat was publicly identified by Environment Canada in 2012. The Species at Risk Act says once the habitat of a species at risk is identified, the minister of environment has six months to determine if any part of that habitat is unprotected. Every six months after that, the minister is to produce a report on the progress towards protecting it until full protection is achieved.

The wilderness society argues there have been no reports at all since 2012.

Eric Hebert-Daly, national executive director for the Society, said this isn't just about producing reports for the sake of reports. The purpose of the reports is to drive a work plan to actually protect the animals.

He said the caribou are an "umbrella species." Protecting their boreal forest habitat would also protect the habitat of many other species, as well as fresh water sources and carbon sinks which help combat climate change.

McKenna's office has not yet responded to a request for comment.

The woodland caribou habitat spans nine provinces and territories. Historically, their range covered more than half of present-day Canada, but they now occupy about 2.4 million square kilometres, about half their 19th century territory. They used to be found as far south as the northern United States in places like Washington, Idaho, Minnesota, Michigan and parts of New England.

The species was designated in 2002 as threatened by the Committee on the Status of Endangered Wildlife in Canada. In 2011 Environment Canada estimated there were about 34,000 woodland caribou in 51 ranges in nine provinces and territories from Newfoundland to the Yukon.

Slate Island in Lake Superior has a large number of Caribou. Too many with not enough food. They are forced to stand up on their hind legs to eat balsam buds. I always recommended that the Ontario MNR sell hunting tags with the requirement that hunters hire First Nations Guides from the Pays Platt and Pic River Heron Bay First Nations.

Over population was an issue with no wolves as predators. If we allowed our pets to starve we would be in Court. I remember a Crane operator doing weekend incarceration over his horses only having a Lean 2 in the early 80's which is puzzling as there are many wild horses in Canada who manage.

Allowing overpopulation of a herd without some human intervention seems negligent. When I listened to a Chief of an Inuit community talk about the crisis of the Tundra Melting my thoughts were that the chain of Islands in Lake Superior may make an excellent Relocation for our Northern Climate Refugees. St Ignace Island had the largest moose population per square mile in Ontario at one time. There are other fur bearing animals also with over 60 bodies of water on the island which is 12 miles wide and I think 8 miles deep at its widest.

They would be able to maintain their Subsistence Hunter Gatherer lifestyle to a good degree. Nature is a Freak Show with 92% of the Great Lakes frozen over the winter of 2014-015. Winter is still alive and well in this area. There are also Caribou on St Ignace Island but they must contend with wolves.

The Black Bay Peninsula is unpopulated by humans with lots of coastline that would make the disenfranchised Inuit devastated by Tundra melting feel more like home. It also has a large Peat Bog which resembles tundra.

I am not sure of the status of the moose herd on St Ignace Island since deer were moving in. The inland lakes have negligible fishing pressure from main landers and I think some of the shallow lakes could be seeded with wild rice to create a food and marketing opportunity. The NW corner of the island had a large flat area of several square miles of native grasses which maybe could create another opportunity.

These were my thoughts in the past few days as I listened to the plight of our Inuit as they watch their homeland melt away. Lake Kluane having lost a major water inflow because of the deteriorated Glacier likely because of Particulate and Soot blowing from China accelerated like a runaway train. That is an issue greatly overlooked. As a Boilermaker I have worked on many new and repaired countless Electrostatic Precipitat ors where the ash is like Talcum powder. What is the efficiency rate of Precipitate at taters and how often are they repaired when wires break and other mechanical components in the Shaker Racks etc.

I am on an Android which is causing spelling glitches. There is a Journal Article on the Soot and Particulate causing failure of the Greenland Glaciers, my thoughts are that too much focus has been put on Co2 when dust on ice and snow is like a runaway train.

Soot and ash particles are

Soot and ash particles are increasing ice melt at an astonishing rate. Once the black particles start absorbing heat instead if reflecting sunlight, the deep channels form and the water pours away. Years ago I came across a study that had looked at building materials reflecting the sun rather than absorbing the heat and the conclusion was that the bright white houses with white roofs found in Greece and parts of the Med were the best. It recommended white or reflective metal on roofs everywhere. It makes perfect sense, yet it's been ignored here.

Here is a link: https://www

Here is a link: https://www.scientificamerican.com/article/cool-roofs-might-be-enough-to...

Treetop, good info; White roofs make perfect cents from an Energy $aving'$ point. Attic temperatures rise to ridicoulous levels increasing the need for Energy gobbling Air conditioning systems. Somehow our Building Codes and proponents of Climate Change have not "Joined the Dots" to work collaboratively on such a simple strategy to reduce energy consumption. White asphalt roof shingles will also last a lot longer than the darker colours of stone that absorb and store heat. Heat buildup is high, just like an asphalt roadway when you see the heat waves rising. Eg, Snow also reflects more sunlight on Solar panels which have peak performance in winter months, as long as the angle is steep enough that the snow slides off.

Thank you for so much info

Thank you for so much info that most of us have never been privy to. What an illuminating and informational commentary letter.