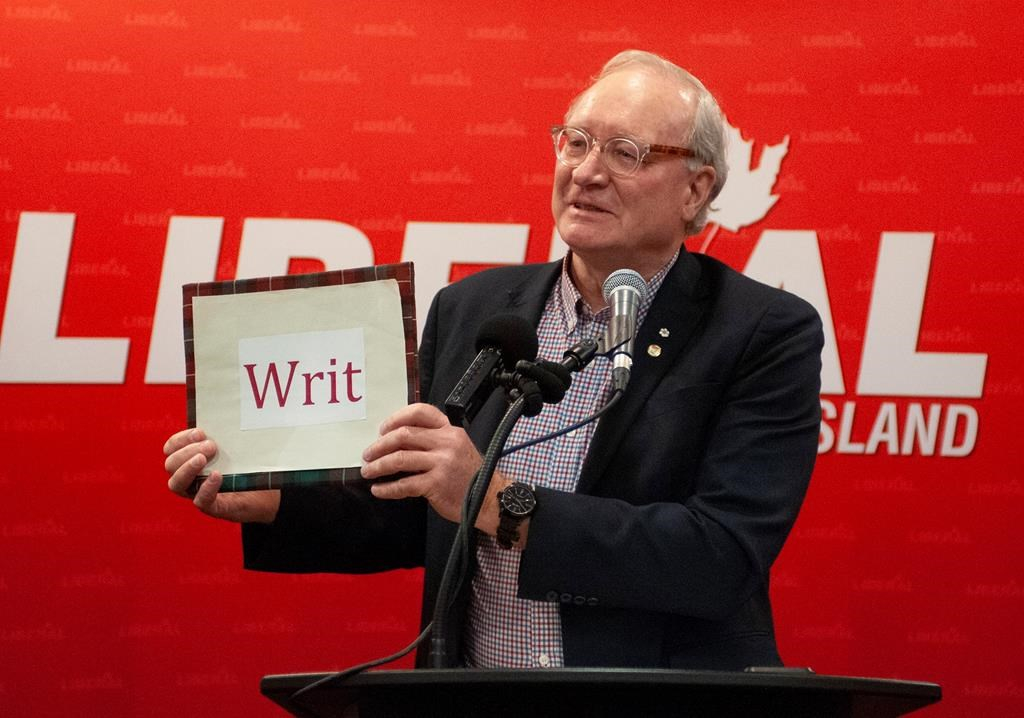 PEI Premier Wade MacLauchlan announces Prince Edward Islanders will be going to the polls on April 23, in Charlottetown on Tuesday, March 26, 2019. Photo by The Canadian Press/Brian McInnis
Previous story
Next story

"This is Prince Edward Island's time," MacLauchlan told a nomination meeting for a local candidate at a Charlottetown hotel. "We are experiencing a sense of opportunity like never before in our long and distinguished history."

The Liberal government didn't have to take voters to the polls until Oct. 7 under the province's fixed-date election provisions, but there was an apparent desire to avoid overlap with the federal election this fall.

"It's been four years. We had a mandate and fulfilled it," MacLauchlan told reporters when asked about the early call. "This is an opportunity to ask Islanders for their confidence to build on that record."

Despite a booming economy, polls suggest the Liberal party is likely facing a rough ride, with the Greens seen as a legitimate contender for power.

In his speech, MacLauchlan called the Progressive Conservatives a party of chaos and opposition — saying they've had five leaders in four years — and suggested the Greens would be too risky.

"The Green Party is untested, and the future of our province is too important to risk on uncertain expensive social experiments, led by a career politician," he said.

Green Leader Peter Bevan-Baker, a dentist, became the first party member elected to the legislature in 2015, and the Greens snagged a second seat in a 2017 byelection.

A Corporate Research Associates poll released this month suggests the Greens had a healthy lead, followed by the Progressive Conservatives, who picked a new leader, Dennis King, in February.

The Liberals were in third place, the poll suggests.

The Liberals have been in power since 2007, and there are signs MacLauchlan — a longtime academic who began his political career in 2015 as premier — is personally unpopular.

"It’s about people. It's about you — and it's about time that the government of the people of P.E.I. understand, respect and live by that message,” the PC party said in a tweet as MacLauchlan was making his election call.

The Greens, meanwhile, posted a clip Tuesday night of Bevan-Baker playing "First Call" on his trumpet.

"What a wonderful way to begin the writ period — with a blast from Peter's trumpet," the party said on Facebook.

In his speech, MacLauchlan touted advancements made by his government on housing, lower taxes and reducing child poverty by more than half.

"Prince Edward Island is working," he told the enthusiastic partisan crowd. "There are now more opportunities for Islanders to get ahead and thrive."

The standings at dissolution in the Island legislature were 16 Liberals, eight Tories, two Green and one independent member.

The Island has only ever been governed by the Liberals or Tories. The last time a minority government was elected in P.E.I. was 1890.

MacLauchlan said Tuesday night that he notified the other party leaders earlier in the day.

He is scheduled to make his first campaign stop Wednesday morning in Charlottetown.

The election will also include a binding referendum on electoral reform — asking voters if they wish to stay with the current first-past-the-post system or change to a mixed-member-proportional-representation model.

It won't be the first time P.E.I. voters have been asked to consider electoral reform.

In fact, they voted 52 per cent in favour of switching to mixed member proportional reform during a plebiscite in 2016, but MacLauchlan rejected the results because of a low turnout of about 36 per cent.

So is there some reason the

So is there some reason the Greens are popular in PEI? The article suggests the Libs have been in power a long time and their leader is unpopular, but no actual things he or they did wrong have been mentioned. The PCs are in chaos. But surely to be first in the polls the Greens themselves must have done something right?

What MacLauchlan did wrong

What MacLauchlan did wrong was refuse to respect the result of the plebiscite. I heard there was a lot of anger about that, despite the allegedly low turnout.