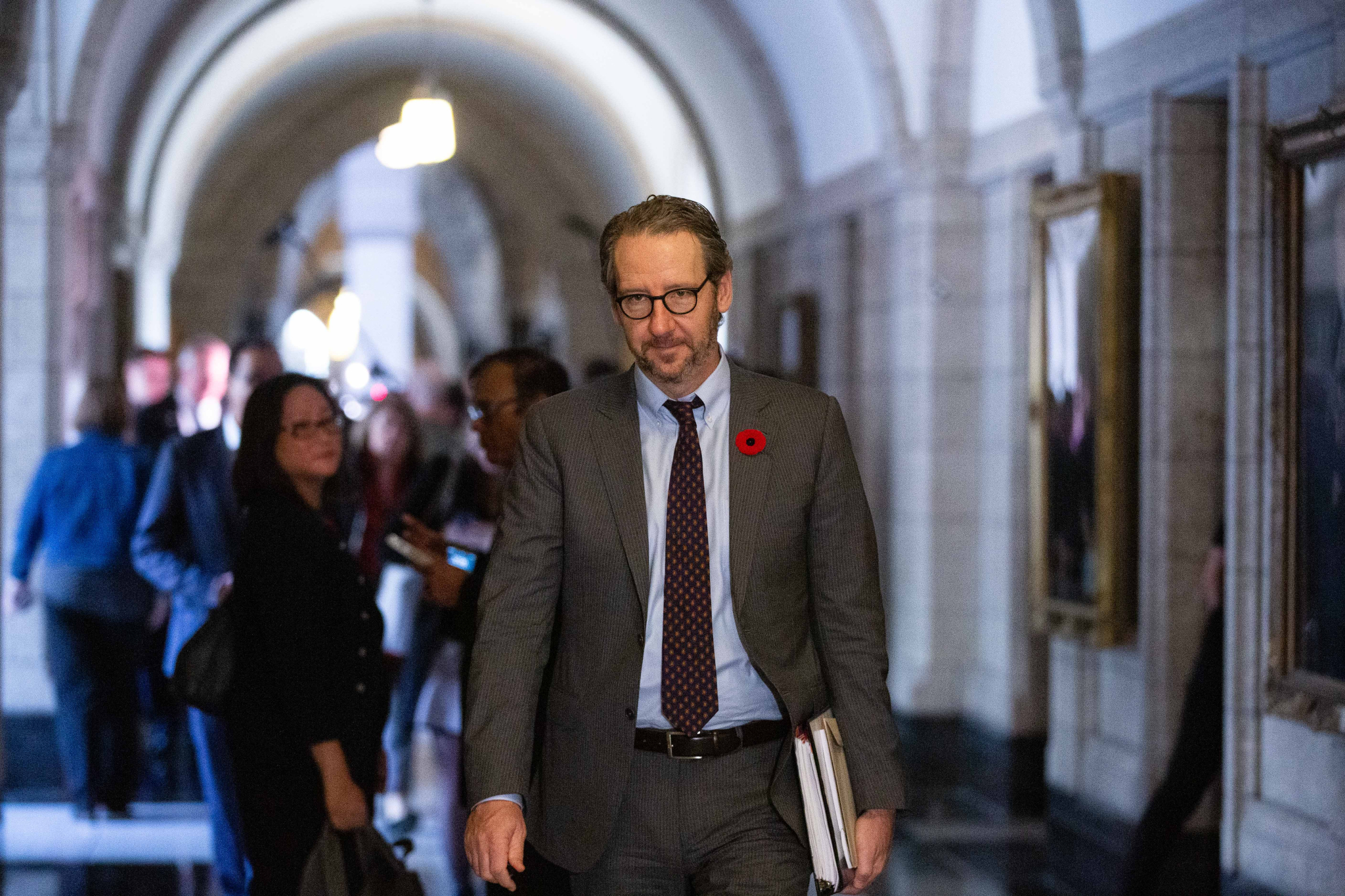 Gerald Butts, then a senior political adviser to Prime Minister Justin Trudeau, is seen coming out of a Liberal caucus at Parliament in Ottawa on Nov. 7, 2018. File photo by Alex Tétreault
Previous story
Next story

Butts — who was Prime Minister Justin Trudeau's principal secretary until he resigned in February amid the SNC-Lavalin scandal — has publicly refuted the claim. There's no evidence supporting it, and its origins are murky at best. So why did Theo Fleury, a retired NHL star and advocate for survivors of child abuse, think otherwise?

“How did Gerald Butts amass $23 million as a public servant??? We should investigate,” Fleury tweeted at Butts on Sunday. Several people immediately pointed out that the number isn't true, and its dubious origins, but Fleury doubled down.

“It’s absolutely not true,” Butts told National Observer. “My kids wish it were."

It’s not clear exactly how Fleury came across the false claim — the respected former pro hockey player didn’t respond to several interview requests. But National Observer traced the disinformation back to a listicle that appears to have been written in 2016, then copied and cross-posted across the internet, eventually appearing on social networks like YouTube, Twitter and Facebook.

Each time the false information was shared or copied, or removed from its original context, it started looking a little bit more credible — at one point, someone even copied the text word-for-word onto Quora, the popular question-and-answer site, lending it even more plausibility.

In recent months, the claim has resurfaced on Twitter, aided by a network of accounts that appear to be bots.

National Observer ran dozens of tweets that amplified the claim through BotCheck, an online tool that uses machine learning to identify automated accounts claiming to be human. Seven were identified as likely bots.

The engagement rates on Fleury's tweet about the false number were also far higher than is normal for his account — a possible sign of artificial or coordinated activity.

Why did NHL star Theo Fleury accuse @gmbutts of having a net worth of $23 million? The fake claim came from a murky listicle website, and was amplified by an apparent network of Twitter bots. Story by @EmmaMci and @RVAwonk #cdnpoli

The claim is a prime example of how disinformation can spread across the internet and be repeated until ordinary people believe it.

Origin of a ‘hilarious claim’

The original, grammatically incorrect article, “Top 10 Richest Politicians of Canada,” was posted to a site called TopRichests.com. It cites no sources, has no author listed and is littered with spelling errors. It appears to pull biographical details about Canadian political figures and mix them with false claims about their net worth.

Though it’s marked as a 2019 article, the Wayback Machine, an online archive, shows the piece was online as early as 2016. And indeed, aside from the poor writing, the piece reads like a who’s who of Canadian politics that year.

It falsely claims that former federal NDP leader Tom Mulcair, who was coming off a disappointing federal election loss the year prior in 2016, is a millionaire. It makes similar claims about former prime minister Stephen Harper — whose name is misspelled throughout the piece as "Stephan" — and several of his cabinet ministers and political appointees.

Notably, the piece fails to mention current Finance Minister Bill Morneau, who is actually a multimillionaire.

It’s impossible to determine who’s behind the original article. The web domain for TopRichests.com is registered to an anonymous hosting service in Panama. There’s no contact information listed on the website, and messages to the site’s Facebook page went unopened.

Although Facebook now requires pages on its platform to disclose where the people running them are located, TopRichests’ page — which has a mere 71 likes — hasn’t posted there since 2018, long before the social media company made that change.

The claims in the piece have also been publicly refuted before. A journalist flagged it on Twitter in 2017, and The Hill Times wrote an article that mentioned it. The same year, now-Alberta Premier Jason Kenney, who was also featured on the list, called it a “hilarious claim” on Twitter.

Still, this piece of disinformation has proven remarkably persistent. It has even made its way onto a blog called “Reading Children’s Books.”

National Observer found similar false claims being made on Twitter about other Liberal Party officials, such as Foreign Affairs Minister Chrystia Freeland and Environment Minister Catherine McKenna. Neither of them are millionaires.

Butts has now been out of politics for several months. However, the disinformation about him may have resurfaced now because the Calgary Herald and alt-right media outlet The Rebel published separate pieces earlier this month that related to Butts’ finances.

Why spread this disinformation?

The motivation behind the TopRichests.com article likely has nothing to do with Canadian politics. Because it’s “mildly lucrative” to pump out low-quality clickbait and monetize it though online advertising, plenty of websites do it, said Fenwick McKelvey, an associate professor of communications at Concordia University who studies disinformation.

“Many of these companies seem to have really dubious quality control,” he said. “My guess is that they're probably using some sort of algorithm or paying for low-calibre clickbait journalism.”

Whether the site created the false information intentionally or through incompetence, the result is the same, McKelvey said — incorrect narratives that can be used for political purposes. It leads to larger questions about the online advertising industry and its practices, he added.

"It's more of a structural issue to me," he said. "The social value of online advertising is in doubt."

The fact that Fleury picked up on the claim is also key, as people are more likely to believe or listen to a source whose name they recognize; Fleury has significant name-recognition in Canada.

Beyond the anonymity of the original article, it’s impossible to tell who might be running the apparent bots attempting to spread this false narrative on social media. Bot networks, or botnets, can easily be bought anonymously online with just a few clicks.

But disinformation is usually not about furthering partisan aims — it’s often about stoking division, said Heidi Tworek, an assistant professor of international history at the University of British Columbia who studies false political narratives.

“Sometimes we have the tendency to want to read party politics into disinformation campaigns," Tworek said. “In reality, a lot of them are about sowing mistrust more generally, which sometimes may benefit one political party.”

One example is the ongoing anti-vaccination movement, she added. Russian bots have attempted to inflame anger on both sides of that debate (the anti-vaccine ideology is not backed up by science).

In this case, Tworek said, the aim may be to decrease trust in the system by validating the suspicion that all politicians are corrupt and enrich themselves through public office.

Though one fake story won’t automatically give someone extreme beliefs, false content that fits into someone’s existing worldview can amplify beliefs they already hold and “push them towards a certain point of view,” Tworek said.

“You have to be in a certain universe of beliefs in order to think that this story is one that is credible enough that you wish to spread it.”

Though it’s difficult to directly connect any one piece of disinformation to any particular impact, in general, the practice can erode trust in democracy and democratic institutions, said Tworek.

“Potentially, (disinformation that sows mistrust) may lead certain people who have the propensity not to vote in the election to not vote, or to vote for a fringe party instead,” Tworek said.

Still, she added, it’s not a direct cause and effect. The reasons people’s views change over time are complex and related to many factors — not just one.

“It doesn't mean these (disinformation) attempts aren't important, it just means we have to be very responsible in how we describe their effects to avoid the sort of hysterical belief that this one piece of information will suddenly turn all Liberal voters into non-voters,” Tworek said.

“There are so many other influences than that.”

Cameron Ahmad had a lot to say about Harper last week. Most of it was false.

Good job ladies. Thanks for

Good job ladies. Thanks for the reality check! It's nice to have people out there fact checking.

I agree whole heartedly. Thank heaven someone I trust is doing this work.

Do people who spread or

Do people who spread or create fake news not feel really, really stupid? They should be called out publicly.