Public far ahead of politics on climate emergency 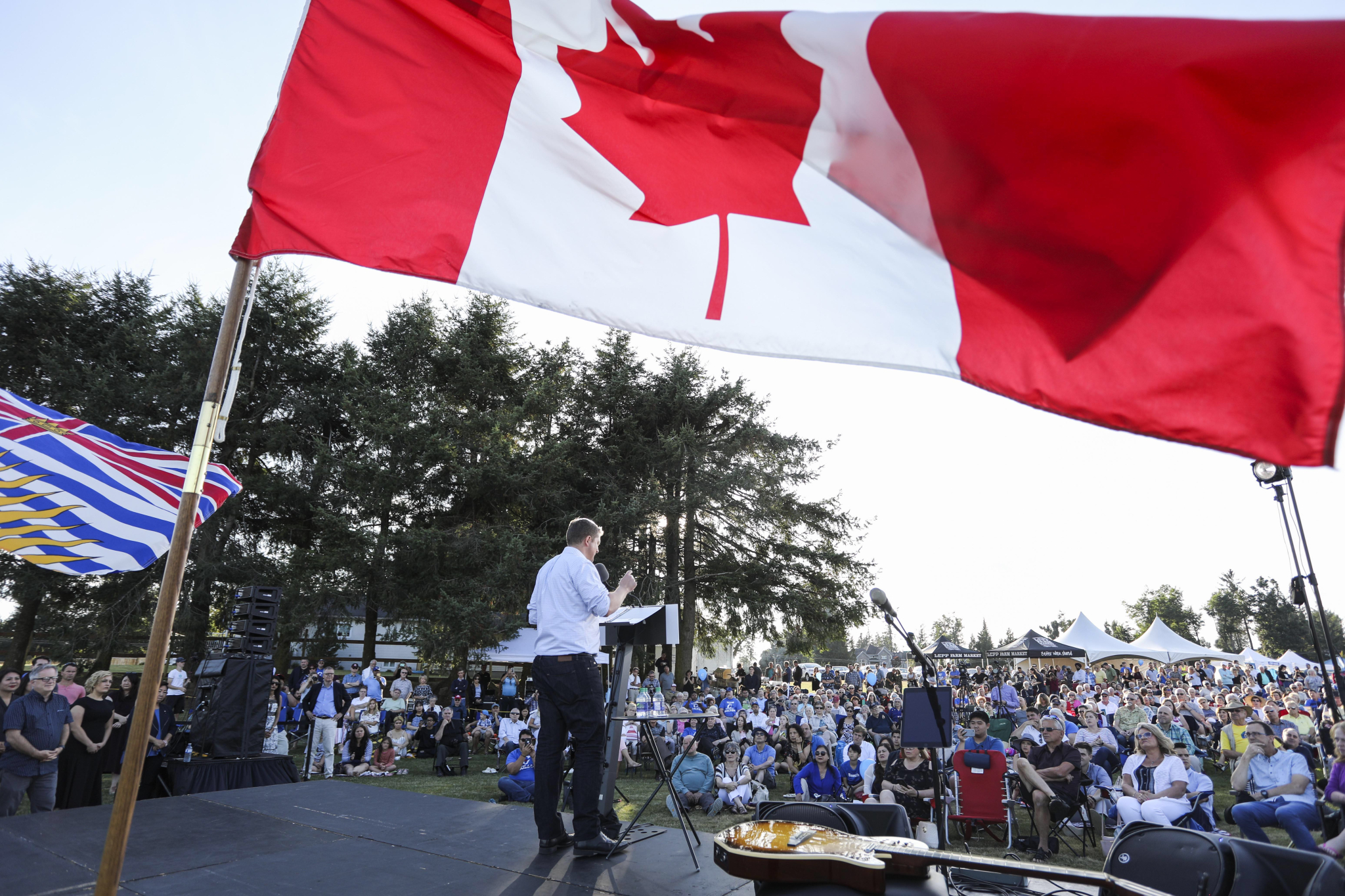 Conservative Leader Andrew Scheer speaks to a crowd in British Columbia on July 28, 2019. Photo by CPC
Previous story
Next story

Last month, as part of the research for a book I am writing on mobilizing Canada for the climate emergency, I commissioned an extensive national public opinion poll from Abacus Data. The full results of the poll can be found on the Abacus website here.

I share highlights and my analysis below. But big picture, the results are hopeful and indicate a high level of support for bold and ambitious climate action. Canadians support systemic solutions that go well beyond what our governments have so far been willing to undertake.

First, a little background on why I commissioned this poll. For years, far too much of the political oxygen and polling on climate change has been consumed by the carbon tax/pricing debate. While carbon pricing is an important tool, it alone is not going to get us where we need to go, and the topic has distracted us from the scale of action needed.

Additionally, too often polling questions individualize the challenge and solutions, rather than focusing on collective and governmental actions. Past polling has tended to over-test people’s willingness to change their personal behavior or to pay a carbon tax.

But people increasingly understand that these “solutions” are not sufficient. People rightly feel cynical when presented with voluntary solutions that don’t match the scale of the challenge, and that others around them are not undertaking. When climate polls do tackle policy changes, most have tended to test incremental options, rather than bold, system-change solutions. The questions we ask, and the solutions we propose, matter.

My forthcoming book will explore the gap between what the science says we must do to confront the climate emergency and what our politics currently seems prepared to entertain. The current challenge, as I see it, is that the climate solutions we need persistently encounter a political wall; the prevailing assumption within the leadership of our political parties appears to be that if our political leaders were to articulate (let alone undertake) what the climate science tells us is necessary, it would be political suicide. And so they don’t.

But is that prevailing assumption correct? That’s what this poll sought to test.

In framing the challenge, communications specialists often recommend against using an emergency or wartime frame. They contend that the public does not respond well to an alarmist or fear-based approach. Similarly, most official government climate plans, the product of careful focus-group testing, barely mention the climate crisis, but rather, focus on positive messaging.

The reality is that we do face an emergency, and we do need a wartime-scale response. And we in Canada have lessons to draw on. It has long been my view that recalling the speed and scale of our historic wartime mobilization can be a source of inspiration (not fear) in the face of the climate emergency.

In undertaking this poll, I sought to determine whether this framing would resonate among the Canadian public and whether there is an appetite for systems-level solutions.

"My overall conclusion is this: our politicians have been underestimating the public. They have failed to take adequate action in the face of the #climate emergency, insisting the public is 'not there yet,'" writes Seth Klein. #opinion

My main takeaway from this national opinion survey of 2,000 people is that the public is ahead of our politics. A large share of Canadians is already deeply worried about the climate crisis, and they are increasingly ready for bold and ambitious actions.

In the wake of the latest report from the UN’s Intergovernmental Panel on Climate Change (IPCC), released last October, combined with recent weather events, we may well be witnessing a shift in public opinion.

Here are some of the highlights from the poll:

These results are quite stunning. As of yet, no federal or provincial government in Canada has been prepared to move this ambitiously. Yet the results show that when one combines “strongly support,” “support” and “can accept,” we find the public’s willingness to get behind bold actions to reduce greenhouse gasses range from a low of 67 per cent to a high of 84 per cent.

The “can accept” folks are notable. My take is that these are people who are still unsure of how ambitious we can be, but with the right kind of leadership – the kind of bold leadership Canada saw in WWII – they could be brought along.

Also of note, 57 per cent of those polled believe the federal government is currently doing too little to combat climate change. And 75 per cent of people either support or strongly support the idea of “our governments making massive investments in new green infrastructure, such as renewable energy (solar panel fields, wind farms, geothermal energy, tidal energy), building retrofits, high-speed rail, mass public transit, and electric vehicle charging stations, as well as reforestation.”

In addition to people’s concerns about climate change, they are also very worried about inequality and affordability. So, when these social equity issues are tackled as part of a climate action plan, support for bold action to reduce greenhouse gas emissions rises dramatically.

The poll listed five policy actions that could help with the transition, including extending income and employment supports to those more vulnerable during the transition, and increasing taxes on the wealthy and corporations to help pay for the transition, and asked people if such policies would make them more or less supportive of bold and ambitious climate actions. Those five policy options and the responses are shown below.

As shown, if the government provided financial support to low and modest-income households to help them pay for the transition away from fossil fuels, 79 per cent of people became more supportive of bold climate action (41 per cent said “much more supportive”, while a further 38 per cent say they would be “somewhat more supportive”).

Similarly, if the government increased taxes on the wealthy and corporations to help pay for the transition, 78 per cent of respondents became more supportive of a bold climate plan (46 per cent much more supportive, and a further 32 per cent somewhat more supportive).

While few people want to pay more income taxes themselves to pay for the transition – an understandable response given the affordability challenges many are feeling – they are open to helping to pay for the plan in other ways. The poll asked if people would consider purchasing “Green Victory Bonds” (modeled on the Victory Bonds of WWII), and 30 per cent said they would be either certain or likely to buy such bonds, with a further 35 per cent saying they would consider it.

It’s worth noting that the remainder were not all opposed; only 36 per cent of respondents were opposed to this statement, while 19 per cent indicated they either don’t know or have no opinion. While only 45 per cent in support might be discouraging, I expected worse.

We are seeing a rise in anti-immigrant views, yet nearly half of us understand that climate change will likely make climate migration a major issue in years to come, and that Canada, in the grand scheme of things, will be geographically lucky, and should not respond by pulling up the draw bridge.

Also noteworthy: the strongest level of support for this proposition, at 56 per cent, was among the youngest respondents (those between 18 and 29).

We also asked people if they currently work in the oil, gas, or coal industry, or in a job closely related to those sectors. Five per cent of respondents said they did, and of those, only 57 per cent said they would want their kids to work in that sector. It would seem that even many who work in the fossil fuel sector see the writing on the wall when it comes to their children’s futures.

My overall conclusion is this: our politicians have been underestimating the public. They have failed to take adequate action in the face of the climate emergency, insisting the public is “not there yet.” But increasingly, the public is ahead of our elected leaders.

A solid majority of Canadians are ready to move beyond incremental policies and to entertain truly transformative climate action. Even many of those “in the middle” still wrestling with these ideas are open to bold leadership. And that is precisely what we need. After all, faced with the existential threat of fascist domination, the political leaders we remember from WWII didn’t “meet the public where they are at.” Rather, they took them where they needed to go.

Abacus Data conducted this national survey of 2,000 people between July 16 and 19. A random sample of panelists were invited to complete the survey online from a set of partner panels based on the Lucid exchange platform. The margin of error for a comparable probability-based random sample of the same size is +/- 2.19 per cent, 19 times out of 20. The data were weighted according to census data to ensure that the sample matched Canada’s population according to age, gender, educational attainment, and region. This piece also appears on the blog of the Canadian Centre for Policy Alternatives–BC Office, where Seth Klein formerly served as director.

The "Transitioning the economy and society away from fossil fuels" has an answer choice "It wouldn't impact your views" that could have been used by some of those who do not need incentives and already believe this emergency needs maximum effort to succeed.

Well done Seth!! Very good and timely work, thank you so much for this!

As for requiring new builds

As for requiring new builds to be "all green" by 2022 ... why not. That was already being done in Germany in the mid 70s!!!
Extend it to all the major reno work, as well ... otherwise all we'll have is a slower rate of growth of GWG emissions. All the old buildings need to be greened as soon as practicable, also!