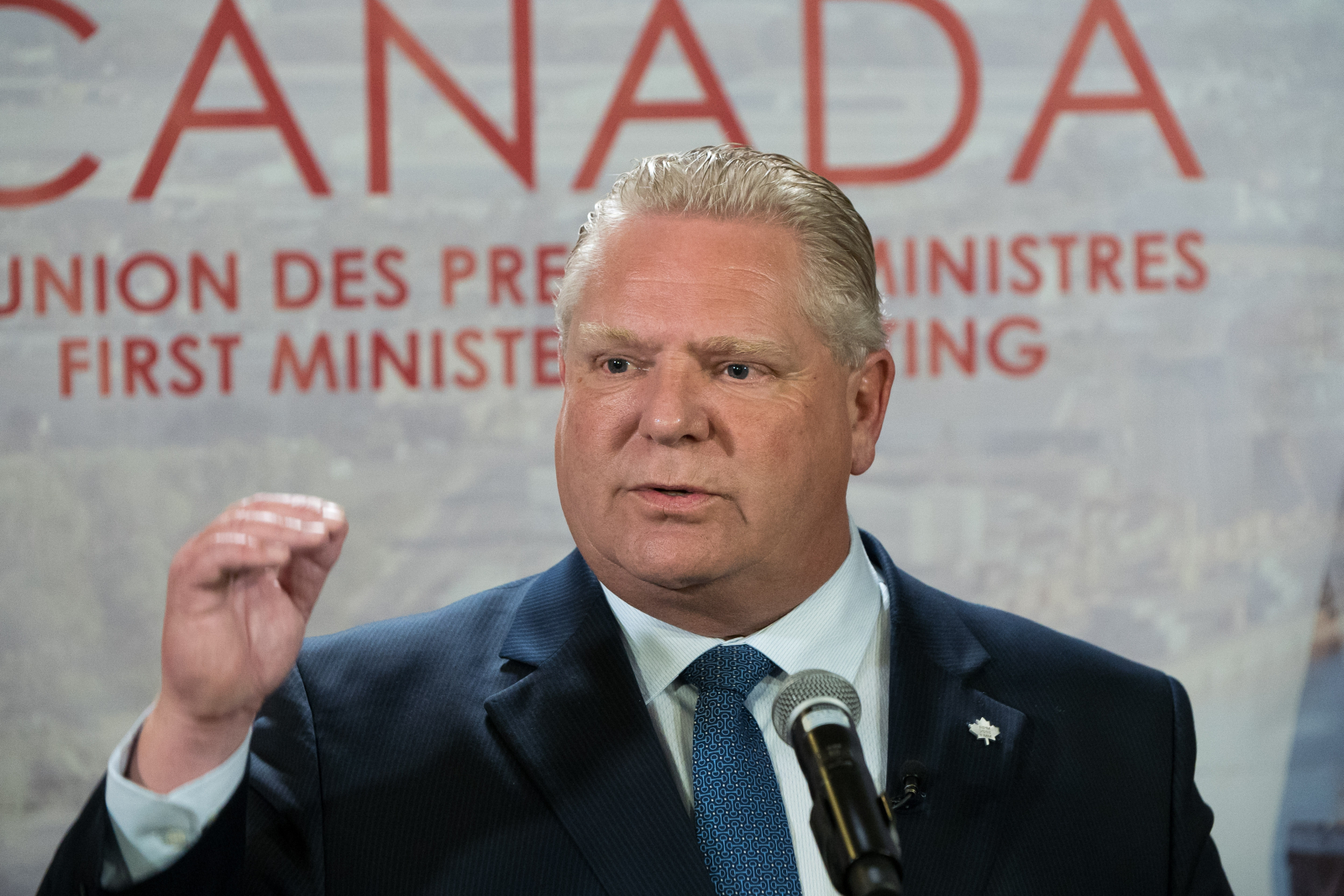 Ontario Premier Doug Ford speaks to media after a meeting with Prime Minister Justin Trudeau and the provinces' first ministers in Montreal on Dec. 7, 2018. Photo by Josie Desmarais
Previous story

Five days ago, Doug Ford said the Canadian people would make the final decision on the validity of the federal price on pollution.

A federal election is due in October, and Prime Minister Justin Trudeau’s Liberals are in a tough fight with the federal Conservatives, led by Andrew Scheer, who have said they would scrap the “job-killing carbon tax” if elected.

"Once the people decide, I believe in democracy, I respect democracy, we move on. The people will have the opportunity, not the courts," Ford said at the time.

Despite this, on Wednesday, the Ford government declared that it was taking its own legal fight against the federal government's price on pollution to the highest court in the country.

The government waited until the very last possible day it could to file the appeal to the Supreme Court of Canada, after the Ontario Court of Appeal ruled in a 4-1 decision in June that Ottawa was well within its rights to insist that provinces meet certain emission-reduction targets via a price on carbon pollution because it related to a matter of “national concern.”

"Despite this decision, we remain committed to using every tool at our disposal to fight against the job-killing carbon tax, which is making life more expensive for Ontario's hard-working individuals, families and businesses," Ontario Environment Minister Jeff Yurek said in a statement.

Ford has promised since last summer’s provincial election campaign to use every tool at his disposal to fight what his legal team argues is Ottawa’s constitutional overreach.

Multiple provinces led by conservative governments have challenged the legal basis for the federal Greenhouse Gas Pollution Pricing Act, which imposes a federal price on pollution on provinces that do not have their own suitably stringent pollution-reducing mechanisms in place.

Saskatchewan is already on the top court’s docket, with hearings expected to begin early next year. It is possible that the court will look to merge Ontario’s challenge with the existing case.

The Alberta government of Jason Kenney is meanwhile challenging the federal scheme via a reference case at the Alberta Court of Appeal. A defeat there could add Alberta to the list of Supreme Court contestants.

“I think you’re going to have every major province that is opposed to the carbon tax at the Supreme Court,” Lisa DeMarco, a Toronto environmental lawyer who has represented the International Emissions Trading Association in the Ontario and Saskatchewan cases, said in an interview.

“This is really testing the federal government’s authority and Canada’s model of co-operative federalism,” she said. “It’s hugely important to Canadians.”

What happens if Andrew Scheer wins the election?

Amir Attaran, a lawyer representing the Athabasca Chipewyan First Nation, said that the Ford government’s decision to appeal to the top court even though Saskatchewan had already done so “was basically akin to mowing your lawn twice.”

“Ford didn’t need to appeal,” Attaran said. “The fact that he is appealing and creating a duplicative process at the Supreme Court just shows his preparedness to throw money away.

“I’ve never seen such a frivolous appeal in my life,” he added. “This is a farce.”

Saskatchewan has to file its factum by Oct. 9. Ontario has to file by Nov. 6. Any interveners have until Dec. 20 to join the case.

Next week, a scheduling hearing is set for Alberta’s legal challenge. Both Attaran and DeMarco predict the Kenney government will ask the court to expedite the case in order to join the Supreme Court challenge.

In the event that Scheer’s Conservatives win the federal election on Oct. 21, the deadline to change the federal government’s legal case, or axe it entirely, may have passed.

The current deadline for the federal government to file its factum and briefs is Dec. 4. Any new government would be expected to reconvene Parliament in January, as is standard practice, Attaran said.

This would mean that Scheer’s appointed attorney general may have to argue that the carbon levy is constitutional, in order to follow the direction laid out by the previous government.

“The usual rule is that the old government’s policies are continued by the public service when the new government is in caretaker mode,” Attaran said. “We’re going to end up in this very peculiar situation, where Scheer’s federal government has to argue that the Greenhouse Gas Pollution Pricing Act is constitutional.”

Ford also dismantled the province's cap and trade program, along with 227 emissions-reducing projects it funded across the province, as one of the first orders of business for his government.

The province argues that the federally imposed price on carbon (currently $20/tonne, rising to $50/tonne in 2022) is creating undue financial burdens on hard-working Canadians.

“Not content with the pain he has caused Ontarians through his deep cuts, now he is wasting their hard-earned money on a lawsuit to prevent meaningful action on the environment,” he said in a statement.

The Trudeau government points out that federal legislation requires that at least 90 per cent of the funds collected through the carbon levy be returned to the provinces in which they were raised. Ottawa argues that most Canadians, and especially middle- and lower-income residents, are better off under the scheme.

But it also has not said whether the price will continue to rise after 2022, with Environment Minister Catherine McKenna telling National Observer in an interview this week that further negotiations with provinces will be required before any decision is made.

In a statement, Peter Tabuns, the Ontario NDP's energy and climate change critic, said this appeal would "force Ontario families to foot the multimillion-dollar bill for (Doug Ford's) political stunt."

“If the Ford government can't lead on climate change, then they should at least get out of the way," Keith Stewart, senior energy strategist with Greenpeace Canada told National Observer in an email.

“​​​​​​​At a moment when the Amazon and the Arctic are literally on fire, it makes no sense to waste millions of Ontario tax dollars trying to make the climate crisis worse.”​​​​​​​

The leader of the Ontario Greens, Guelph MPP Mike Schreiner, said he was frustrated by what he called a “politically motivated legal challenge to undermine climate solutions.”

“​​​​​​​We are facing a climate crisis that is costing us more each day,” he added. “Instead of working on solutions, the premier continues to use our children’s future as a political wedge issue to attack the federal government. This is wrong and reckless.”

Editor's note: this story was updated on Aug. 28, 2019, at 5:30 p.m. to include comments from legal experts and additional context about the carbon-price legal challenge.

Trump, Bolsonaro, Kenney and Ford...the great visionaries leading us to a bleak future. Thanks, guys!