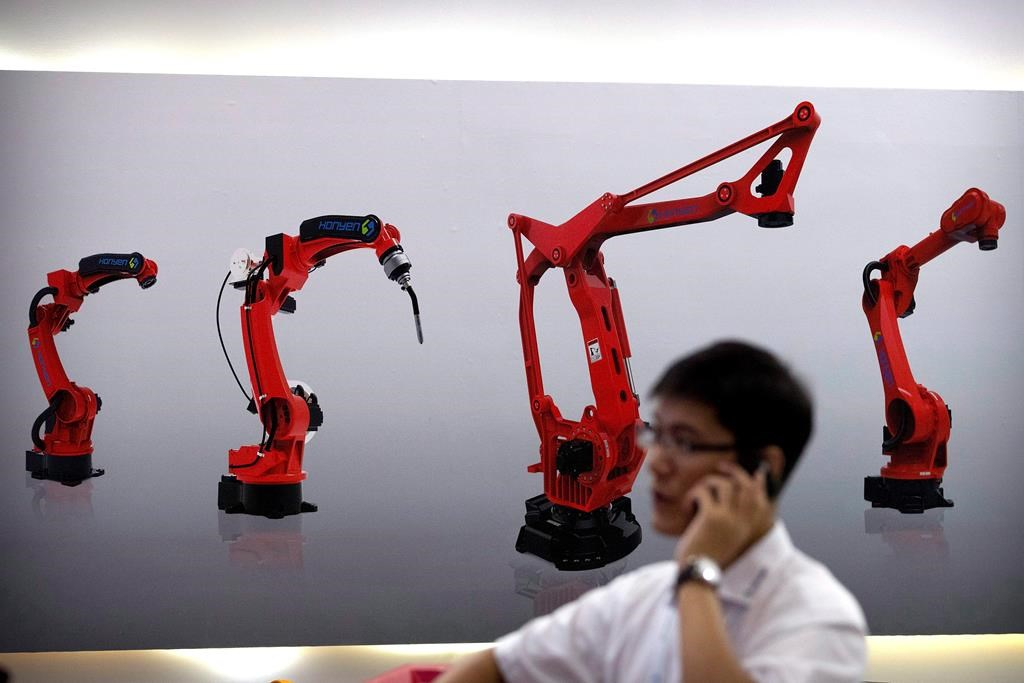 In this Aug. 15, 2018, photo, a visitor talks on his smartphone in front of a display of manufacturing robots from Chinese robot maker Honyen at the World Robot Conference in Beijing, China. File photo by The Associated Press/Mark Schiefelbein
Previous story
Next story

Newly released documents show that top government officials believe there is no imminent threat that artificial intelligence and robots will displace large segments of the Canadian workforce.

In work done last year, federal experts found the likelihood of a "doomsday" scenario where automation eliminates half of Canadian jobs to be "overstated."

But officials warned there were early indications of challenges in parts of the economy that the government should do something about, such as the way online streaming services are reshaping music, television and movie production.

In a separate briefing, officials were told ahead of summer that 11 per cent of jobs in Canada could be automated over the next 15 to 20 years, and a further 29 per cent are "likely to change significantly."

The Canadian Press obtained a copy of the briefing summary, as well as May and June drafts of the report, through the Access to Information Act.

The report was to be used as the foundation for advice to the victor of the fall federal election on how to help workers at the dawn of a new decade.

The work was part of a series of exercises officials have run to see how well "social safety net" programs respond to the most dire of potential outcomes caused by technological shifts in the workforce.

It's unclear how well federal programs fared. Those details, like many others in the documents, have been blacked out or not released because they are considered advice for government.

Federal officials have forecast where the impacts of automation are likely to be felt most, such as rural towns reliant on manufacturing, according to documents previously obtained by The Canadian Press in March. Those documents, alluded to in the June report, also listed the towns most and least likely to feel the impacts in each province.

But exactly where effects are felt and how fast they arrive remains a guessing game.

For instance, the federal documents say some tasks, such as copy editing and data entry, could be outsourced overseas to low-cost workers through online platforms. Three-dimensional printing, on the other hand, could bring back manufacturing jobs.

Officials also wrote that other trends not measured in the report will shape the future of work, such as the transition to a low-carbon economy and increasing numbers of LGBTQ2 workers.

Some policy responses will come into effect with the turn of the calendar to 2020, including the launch of a $250-a-year benefit for workers to be put towards training, and a matching leave underwritten by employment insurance. That work will be overseen by Employment Minister Carla Qualtrough, who has been given responsibility for skills training and the EI system.

Officials advising Qualtrough have heard that many adults lack "soft skills and basic digital skills" needed for success in the future, according to a summary of a May presentation to deputy ministers — the top federal bureaucrats — by an official from the Organization for Economic Co-operation and Development.

A recent report by the Brookfield Institute came to a similar conclusion, and recommended governments create "a wide variety of accessible programming designed to teach Canadians general workforce digital skills ... along with general soft skills."

Meanwhile, Labour Minister Filomena Tassi is tasked with updating the federal labour code, including increasing the federal minimum wage to at least $15 an hour, and additional protections for "platform workers," such as Uber drivers.

Several of the details in Tassi's mandate letter reflect recommendations of a blue-ribbon panel of experts. The panel also recommended the government look at models of collective representation for non-unionized workers, and rules to compensate workers who stay connected by email to the office after work hours.

Sunil Johal, chair of the panel, said a key message from the report is that labour rules and regulations need to be frequently reviewed as more shifts are felt in the workforce.

He said there is also a need to make regulations more nimble. That might mean creating what Johal described as "outcomes-based regulations" to address shifts in the labour market to spell out what the government expects but allow businesses to determine the means to that end.

"If we take as a given that the world of work and the labour market is going to be shifting and adapting more quickly than ever as we move forward, then we absolutely need to move to regulatory legislative approaches that move just as quickly," Johal said.

"When there's a decades-long lag, that's where you're going to have huge issues that ... put labour standards at risk of falling just so far out of step that it's completely unacceptable."

In a statement accompanying the release of the panel's report in December, Tassi said the government would "consider the excellent work done by the panel" in making changes to federal labour rules.

This report by The Canadian Press was first published Jan. 1, 2020.

Since governments ignored the

Since governments ignored the massive shift of blue-collar jobs out of North America as a result of automation and globalization, it's to be expected that they will try the same stunt on the effects of Artificial Intelligence, and this report seems to be a step along that same path. This lazy strategy resulted in the benefits of these two trends mostly going to corporate owners and their executives, with benefit going to consumers, while workers paid the price with little support for re-training and economic re-development in effected areas. There is much reason to suspect that AI will substantially increase the disappearance of jobs both in white and blue collar, and professional areas of the job market, and I see little government interest in answering the question of how the resulting transition away from traditional full-time work is going to allow a middle class to exist, raise kids, put food on the table and pay for accommodation, let alone the continuous output required to support a mortgage. A full public discussion of the issue is needed to flesh out the paradigm shift in public policy needed to accommodate this inevitable economic transition and take advantage of it for the public good. Sitting on our asses and letting the corporate world take all the marbles will not be a viable solution this time around since the result will be a crippled economy with few able to buy the goods produced by all the efficient AI automated processes, and the rest relying on overloaded welfare systems.
I suggest, in the meantime, a strategy of personal investment in the economy is the only reliable solution, which effectively moves a citizen more towards the corporate-owner side of the equation, and thereby becoming an automatic beneficiary of the accelerating trend towards automation that AI is creating. This cannot be done without first reducing consumption and eliminating consumer debt; a huge undertaking for most. But I would suggest it's a must for future well-being, without the fall-back position of relying on government action (an oxymoron). As regular full-time work becomes increasingly rare, an investment-based income-stream from dividends etc. will be required to help make ends meet, and avoid being a victim while governments 'fiddle and Rome burns'.