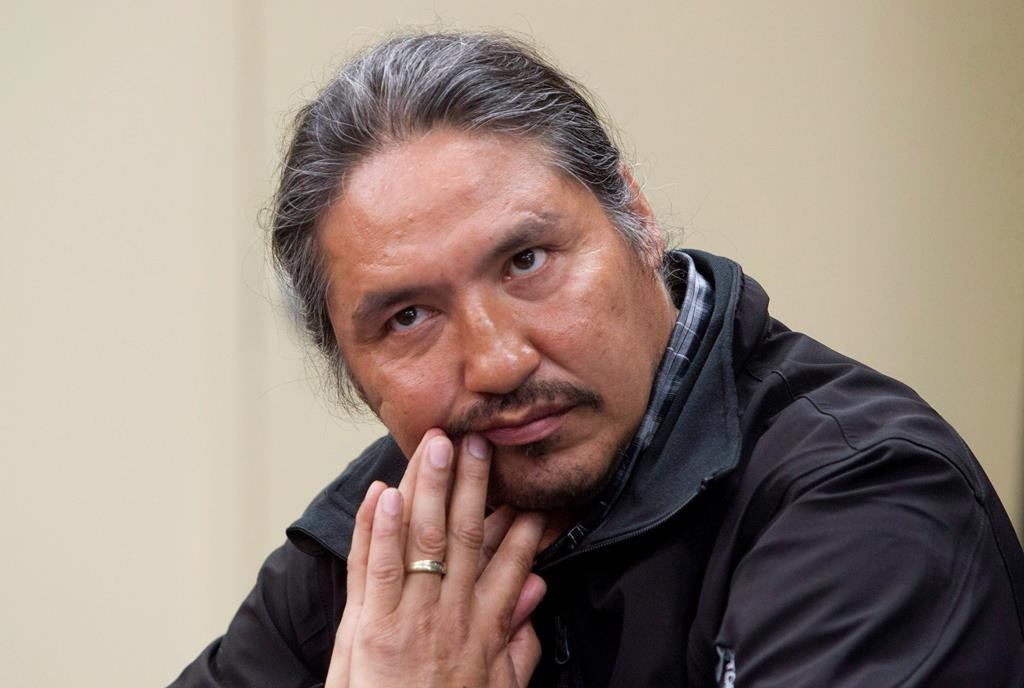 Chief Allan Adam of the Athabasca Chipewyan First Nation listens during a press conference in Fort McMurray, Alta. on Friday, May 30, 2014. File photo by The Canadian Press/Jason Franson
Previous story

Alberta's Indigenous relations minister says a last-minute war of words with a First Nations leader over a multibillion-dollar oilsands mine is a case of bare-knuckle bargaining.

"He (Adam) is a negotiator. He sees a spot where maybe he could get a little extra cash for his First Nation. Can't blame a guy for that," Wilson said in an interview Wednesday.

"Not everybody is going to agree to everything .... We all have to have some differences. And Chief Allan is not opposed to the (Teck) project."

Wilson said there is "a little bit" of a concern that the public disagreement could give the federal government a reason to reject the oilsands project.

"But what I heard from (Indigenous Services Minister Marc Miller) this morning, and so many other people I've talked to at the federal level, they understand that these are negotiations and that Teck has done 10 years of consultations."

Prime Minister Justin Trudeau's government has until the end of the month to make its decision.

Athabasca Chipewyan is one of 14 First Nations and Metis communities that have signed participation agreements on the Teck mine.

But in public letters sent last week to the federal government and to other chiefs, Adam said he's worried that Alberta's failure to consult and take meaningful action on environmental concerns — ranging from caribou habitat to water issues — could jeopardize the project.

Adam also raised money: "If the government of Alberta is serious about getting Indigenous communities on board with major industrial projects, it should provide a share of the realized tax revenue from each project."

Wilson, as well as Environment Minister Jason Nixon, have said there have been extensive discussions with Adam about his environmental concerns.

Adam could not be reached for comment Wednesday ahead of a scheduled meeting with Premier Jason Kenney, Wilson and other First Nations chiefs at Government House in Edmonton to discuss unrelated issues.

Wilson said he expected the letters would come up. "We're going to have to address the elephant in the room."

Kenney has been raising the political stakes of late on Teck Frontier. He has said there is no reason for Ottawa to reject the mine, since it has passed a provincial-federal regulatory review.

The project would create an estimated 7,000 construction jobs, 2,500 operating jobs and about $12 billion in federal income and capital taxes.

In a letter sent to Trudeau last week, Kenney said saying no to Teck at this point "would send a chilling signal regarding federal intentions on all future oilsands or natural resource development projects."

"If this project does ultimately end up being in jeopardy, the majority of blame can be laid squarely at the feet of Jason Kenney and the UCP for engaging in an arrogant, disrespectful and frankly sloppy failure to do their job," said Notley.

This report by The Canadian Press was first published Feb. 12, 2020

"You can not be a climate

"You can not be a climate leader when you are talking about expanding oil and gas and continuing to abrograte the rights of indigenous communities." Eriel Deranger ( https://www.youtube.com/watch?v=JOPP8MRLKn8 ). How much longer are we going to trample on indigenous rights and spew GHGs? We should be building a climate friendly economy, not Jason Kenney's distopia.

The comments of this Alberta

The comments of this Alberta politicians truly illustrate that he cannot even conceive of valuing anything other than money. Not a liveable future for our children. Not a planet full of biodiversity and wilderness areas. Not a respectful relationship with indigenous and all peoples. Not clean water, air and land. Not all of the benefits that accrue from a stable climate, a diverse economy, a healthy population, a feeling of hope for the shared future of our planet.

What an empty bag he is.

If our federal government members allow themselves to once again be blackmailed by this type of soulless sack, they will have earned the clear-eyed denunciation they deserve, by every one of this nation's children, including their own.

The little cluster of squealing wizards behind the curtain are not worthy of our attention or regard. Let's please, finally, move on.