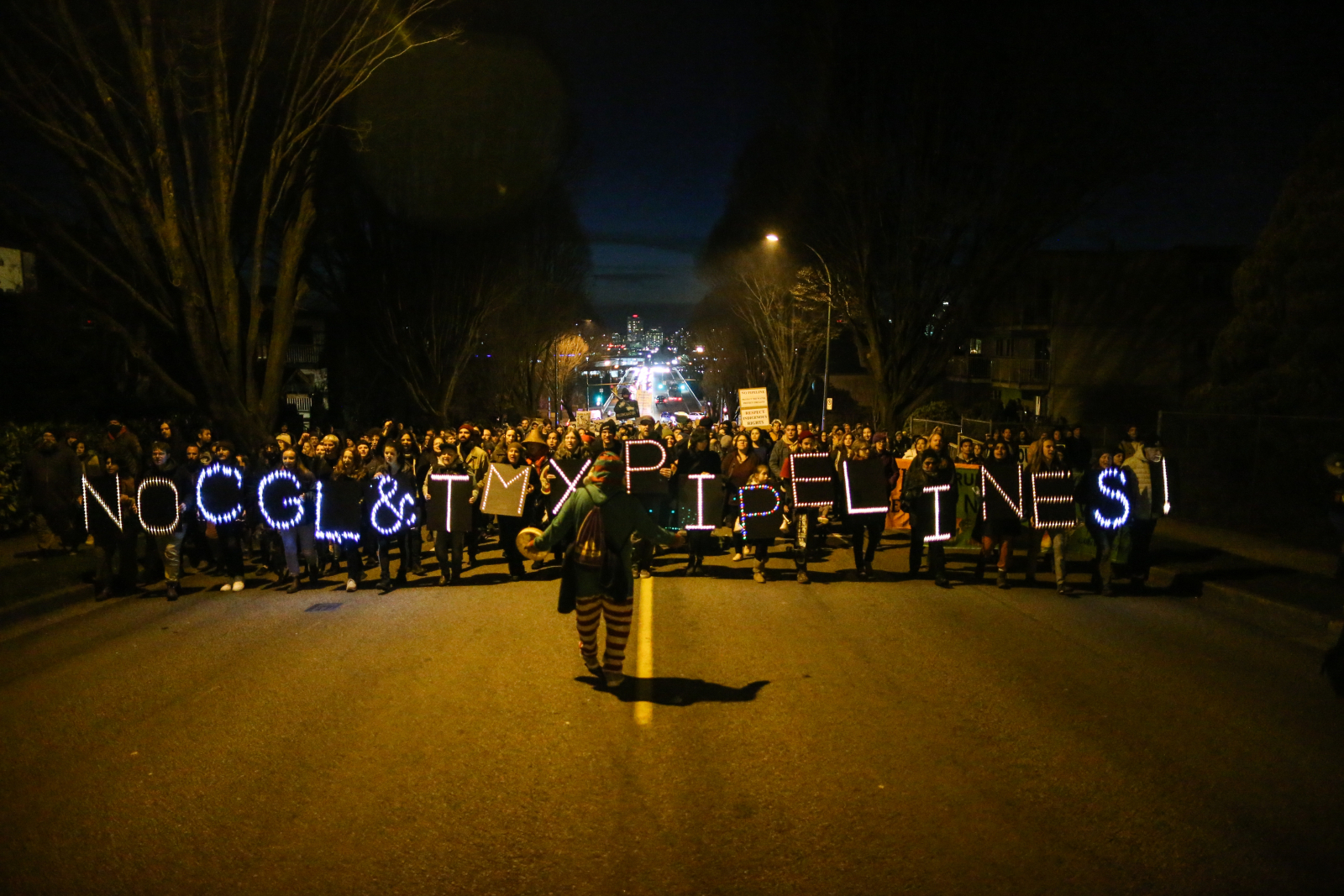 As the western sun sank into the Pacific, hundreds of voices echoed around the transit station at Commercial Drive and Broadway in Vancouver.

Hundreds of people again blocked a key intersection in this West Coast city, snarling rush-hour traffic and closing out the 13th straight day of nationwide solidarity actions in support of the Wet’suwet’en hereditary chiefs and their fight against the Coastal GasLink pipeline through their traditional territory.

“Justin Trudeau can put an end to this by ending the occupation of Wet’suwet’en territory,” organizer Alison Bodine shouted to the assembled crowd. 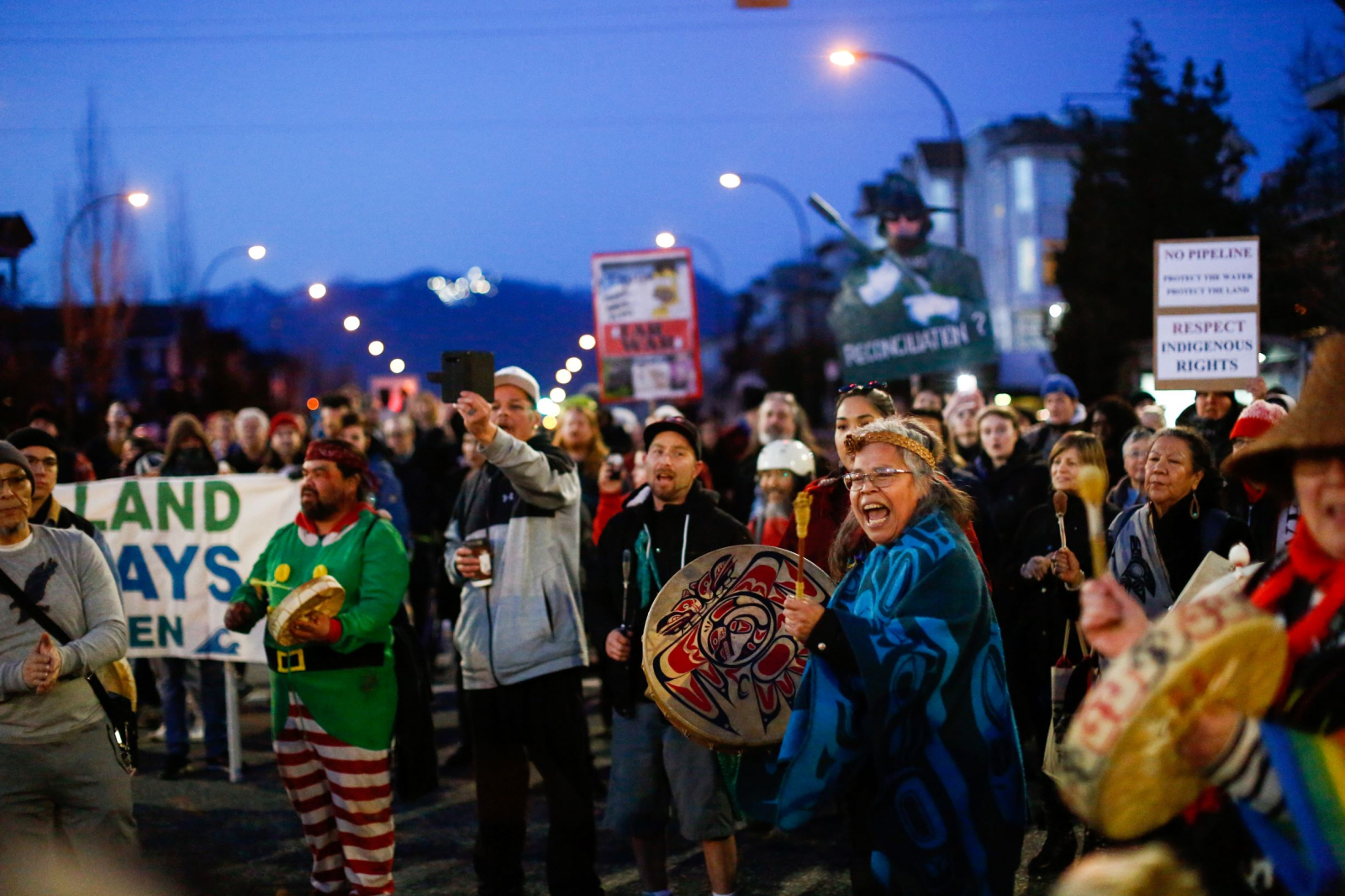 That rallying cry has turned a small police detachment on the Morice West Service Road outside Houston, B.C., into a critical bargaining chip as federal and provincial leaders try to broker a meeting with the hereditary chiefs and negotiate an end to the crisis.

One of the five Wet’suwet’en hereditary clan chiefs says he will not meet with the federal government until that detachment — indeed, all RCMP officers — are withdrawn from his clan’s territory.

Chief Woos, a.k.a. Frank Alec, is chief of territory that includes the land where, earlier this month, police used helicopters to drop tactical officers armed with assault and sniper rifles behind protester lines and arrested 28 people.

The detachment in question — called the Community-Industry Safety Office (CISO) — was set up in the aftermath of a similar raid on the same location last year, and police have maintained a constant presence ever since.

Woos said no meeting can happen until the federal police force — who he called “bullies” — leaves the area.

Wednesday’s protest was as much about future industrial development, such as the Trans Mountain pipeline expansion, as it was about Coastal GasLink.

The RCMP said in a statement it was aware of the request and discussions are underway on next steps, while Indigenous Services Minister Marc Miller said during an emergency debate "there is a clear path forward."

Police leaving the area completely seems unlikely for the moment. The RCMP has said that while its major operations in the region have concluded, a small mobile unit will remain in place and will continue patrols of the forest service road to ensure everyone's safety.

Although 20 elected First Nations councils along the 670-kilometre path of the Coastal GasLink pipeline have signed agreements with the company, the Wet'suwet'en hereditary chiefs say the project has no authority and cannot proceed without their consent.

In Vancouver, Wednesday’s protest was as much about future industrial development, such as the Trans Mountain pipeline expansion, as it was about Coastal GasLink.

Moments before the protest march began, transit security taped a copy of a newly minted injunction to pillars around the SkyTrain entrance. The pre-emptive injunction was granted Wednesday afternoon, allowing police to arrest anyone interfering with or blockading any of Vancouver's transit rail lines.

George Rammell said he has been involved in anti-pipeline activism since getting arrested years ago on Burnaby Mountain protesting the Trans Mountain expansion.

“If you add up the costs of the Site C Dam, the Trans Mountain pipeline and the Coastal GasLink project, you’re probably looking at $25 billion (that) could have been spent on research and development for green energy,” Rammell said.

As Wednesday’s march neared Clark Drive, a major trucking route in and out of the Port of Vancouver, truck driver Colin Harvey said he was stuck in traffic for more than an hour.

“I find what they’re doing no different than terrorists,” Harvey said. “They’re disrupting everything. If they want to protest, that’s fine, but look at this traffic.

“I’ve been trying to go around them, but everywhere I try to go, there they are again.”

As solidarity actions continue, patience is wearing thin in some parts of the country.

In Edmonton, a blockade went up on rail tracks near the city’s outskirts, only to be met by counter-protesters who arrived and dismantled the Wet’suwet’en supporters’ barricades.

Video posted to social media showed people clad in black and yellow safety vests hauling pieces of the blockade away and throwing them into a waiting pickup truck.

Nearly two weeks of these blockades have crippled Canada’s rail system, making it difficult for supply chains to get products where they need to go.

It’s also beginning to impact the rail companies themselves.

Via Rail, which last week cancelled its nationwide service because of the blockades, announced up to 1,000 temporary layoffs it says are a direct result of the unrest.

While some of its service in Eastern Canada has now been restored, the company said it regrets the layoffs and urges government leaders to continue dialogue to end the crisis.

Chief executive Cynthia Garneau called the ongoing interruption due to a 13-day blockade by the Mohawk Nation east of Belleville, Ont., "unprecedented."

"In 42 years of existence, it is the first time that Via Rail, a public intercity passenger rail service, has to interrupt most of its services across the country," she said in a statement.

The company has cancelled more than 530 trains since blockades began on Feb. 6.

Earlier this week, Canadian National Railway temporarily laid off about 450 workers from its operations in Eastern Canada, after cancelling more than 400 trains since protests arose.

As the blockades and solidarity actions continue, pressure is mounting on Prime Minister Justin Trudeau to find a way to end the crisis, with many critics calling for co-ordinated police enforcement to end what they describe as “illegal blockades.”

But so far, Trudeau has signalled he prefers a negotiated solution over the use of more police force.

On Tuesday, Trudeau called for patience as he faced demands from the Opposition Conservatives to crack down on protesters.

Recognizing the crisis as "a critical moment for our country and for our future," the prime minister acknowledged people on all sides are frustrated.

Across the country, the protests show no signs of slowing. And with an announcement about the proposed Teck Frontier oilsands mine looming on the horizon, this crisis is poised to potentially get worse.

With files from Amy Smart and Christopher Reynolds, The Canadian Press

"canada's reputation as a

"canada's reputation as a reliable business partner who keeps their word is at stake due to blockades slowing down or stopping goods from moving " So says the head of the Small business council of Canada(500 employees or less) NO IRONY IN THAT COMMENT: keeping written contracts?????
Has ANY treaty ever written with first nations EVER been honoured by the feds or businesses in settler Canada history eg. Scrips and Metis land theft scheme? to name one of thousands of betrayals

check out ricochet media report on the impossibility of policing wildcat strikes and blockades when 4 in 10 Canadians sympathize with them. You can't control an uprising with more than 3% of pop committed to act, never mind 40% !!!!!!!!
Gonna have to actually DO something honourable to end this.
I am cheered by the passionate support and understanding of phone in callers even on CBC radio.

If Trudeau could think "out