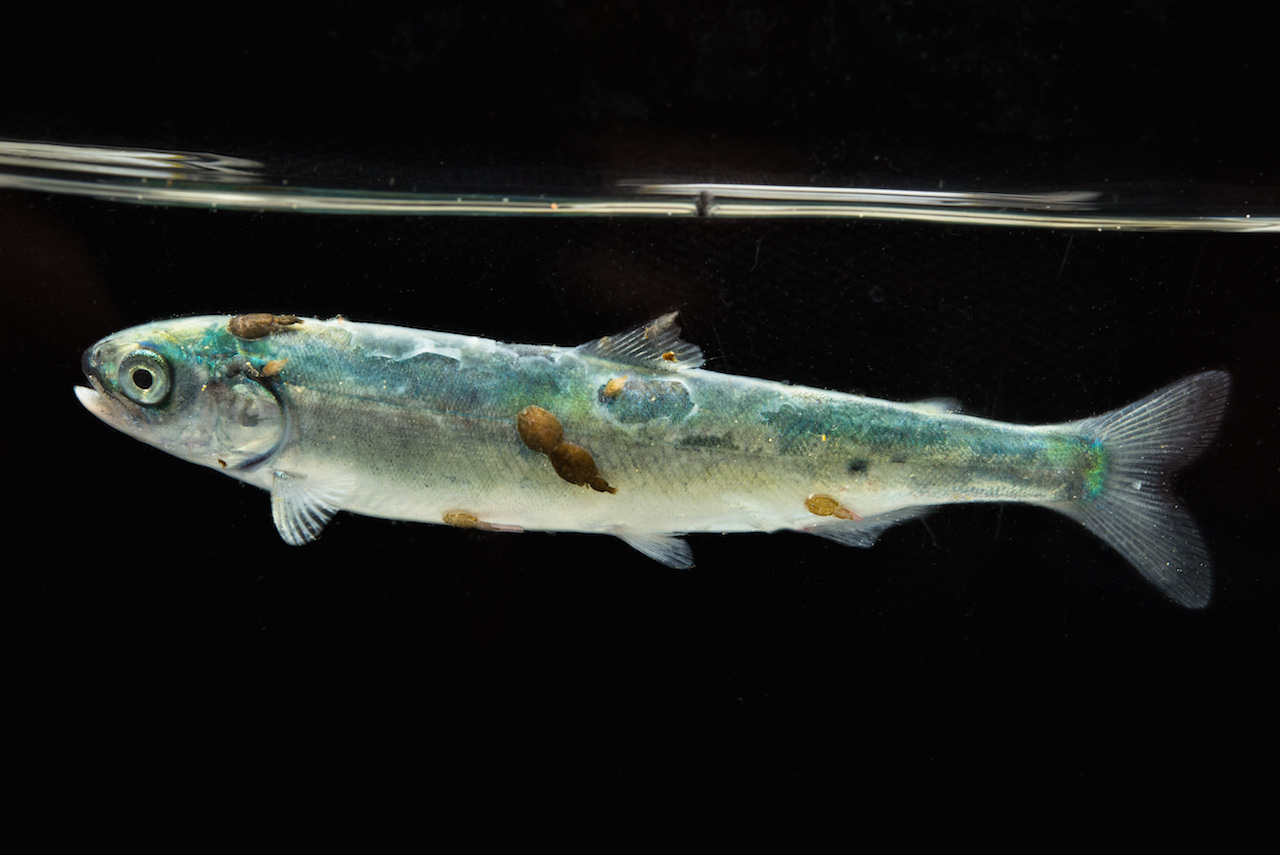 A First Nations leadership alliance is calling for the immediate end to salmon farming using open-net pens in B.C. waters, citing the threat of sea lice to wild fish stocks.

And on Monday, NDP critic for Fisheries and Oceans Gord Johns also demanded the federal government fulfil its promise to transition to closed containment aquaculture made during the last election.

“The federal and provincial governments have been taking a piecemeal approach to this problem, with long timeframes for transition to closed containment pens, and only in a few places,” said Terry Teegee, regional Chief of the British Columbia Assembly of First Nations.

“We need to end salmon farming in our open oceans now to protect both wild salmon and Indigenous ways of being from extinction.”

The Fisheries and Oceans Canada (DFO) threshold for parasites found on the farmed salmon March 1 to the end of June — the outbound migratory season for juvenile wild salmon — is three lice, which triggers the requirement for treatment.

Additionally, 94 per cent of sampled juvenile wild salmon migrating through the Discovery Islands were infected with the parasite, which can kill or weaken young fish, said the council, citing an independent report by marine biologist Alexandra Morton

All have contributed to a dramatic drop in wild salmon, leaving some runs functionally extinct, the council said.

“We need to end salmon farming in our open oceans now to protect both wild salmon and Indigenous ways of being from extinction,” Terry Teegee, Regional Chief of the British Columbia Assembly of First Nations.

Ministry of Fisheries and Oceans response

The DFO acknowledges the concerns of Indigenous communities regarding open-net finfish aquaculture, it stated in an email Tuesday.

“Protecting wild Pacific salmon is a top priority for our government, and we recognize First Nations’ historical cultural connection to wild salmon,” the email stated.

“The Government of Canada is continuously improving how it regulates the aquaculture industry, striving for the best standards possible to meet the global demand for our farmed seafood products, while making sure marine ecosystems are healthy and wild fish populations are protected.”

It is important aquaculture operators adhere to the rules and guidelines outlined in regulations, legislation and their licence conditions, the DFO stated.

Sea lice in British Columbia during the 2020 juvenile salmon out-migration this year have been controlled, with no facilities violating licence conditions, the DFO added.

However, the DFO was unable to clarify what licencing conditions were to National Observer before publication time, or what sea lice levels salmon farms reported to DFO April through June.

Gord Johns, MP for Courtenay-Alberni and NDP DFO critic agreed with the FNLC, reiterating his own calls for the federal government to fulfil its promise to move to closed containment.

“It’s no surprise to me to see the announcement from the Assembly and FNLC that they want to see the transition to closed containment,” Johns said Monday.

“They rely on wild salmon for their food security, culture, economy and their way of life, and government needs to honour its 2019 promise to all Canadians and especially Indigenous peoples.”

During the last election, Prime Minister Justin Trudeau and the Liberal Party platform promised a transition from open-net pen salmon farming in B.C.’s coastal waters to closed containment systems by 2025.

However, Minister of Fisheries Bernadette Jordan has walked back that date stating her letter of mandate set 2025 as a deadline to establish a plan for closed containment, not to ensure it was in place.

The DFO confirmed that date, stating the federal government remains committed to working with the province of British Columbia and Indigenous communities on creating a responsible plan to transition from open-net pen salmon farming in coastal British Columbia waters by 2025, its email stated.

When pressed by Johns during a standing committee on fisheries and oceans meeting June 9, about whether the federal government would enact a plan or containment by 2025, Jordan did not commit either way.

“We are working extremely hard with our First Nations communities and the province of B.C. to make sure we’re doing everything we possibly can to move to closed containment,” said Jordan, adding consultation was key.

“We know that there are many communities that rely on open-net pens as economic drivers, and we are working with them to figure out the best ways forward, and we will continue to do that work.”

As part of the process in examining alternatives to open-net pen farming, the federal government released a study in February examining technology options for salmon farming in B.C. that would reduce impacts on wild salmon.

The study concluded that land based water recirculating aquaculture systems (RAS) and hybrid production technologies are ready for commercial development on the B.C. coast.

But, floating containment and offshore production systems need up to five and 10 years respectively to evaluate potential, it added.

The study also recommended a clear national legislative and regulatory framework is needed for aquaculture that supports future development of production technologies.

There are two Canadian operations already using the (RAS) model, Sustainable Blue, in Nova Scotia, and Kuterra, a 'Namgis First Nation operation in Port McNeill, B.C., that reportedly entered into a lease agreement with U.S.-based Whole Oceans in December.

Mowi Canada West (MCW) stated it was a pioneer in land-based, closed containment systems in an email statement Monday.

All fish spend the first part of their lives in land-based hatcheries on Vancouver Island before being moved to ocean pens, the company wrote.

But there are challenges to raising fish to harvest in land-based systems, MCW stated.

“While smaller land-based operations have done well raising fish to harvest, operations that have tried to grow a larger number of fish in land-based tanks have struggled for several reasons, including poor fish health,” MCW wrote.

“Land-based farming also has significant environmental challenges that must be considered, requiring vast amounts of land, water and electricity to produce the large amounts of fish required to meet human demand.”

The company is watching technologies being tested around the world, and if they prove successful, it will look at how they might be adopted, MCW stated.

In addition to calling for closed containment, the FNLC also called on the federal government to adhere to a recommendation of the Cohen Commission, a 2012 inquiry into the decline of sockeye salmon in the Fraser River.

The commission called for the Ministry of Fisheries and Oceans to prohibit net-pen salmon farming in the Discovery Islands, a migratory path for salmon, on Sept. 30, 2020 if harm is posed to migrating Fraser River sockeye.

Minister Jordan and the DFO did not respond to questions about what steps, if any, the DFO were taking to meet this recommendation in its email statement to National Observer.

The BC Salmon Farmers Association (BCSFA) said it would immediately consult with Indigenous leaders around the concerns they raised, in an emailed statement Monday.

“B.C.’s salmon farmers value their relationships with First Nations, and the majority of salmon we farm is done under agreements with First Nations,” said John Paul Fraser, Executive Director of BCSFA, adding he understands management of sea lice is an ongoing concern.

The association stated B.C. wild salmon was important to all stakeholders.

“We share their passion and concern about the health of wild salmon, and the belief that good science on that front is critical,” Fraser said.

“As an industry we are committed to adopting the newest technologies and processes to be better stewards of the environment.”

The BCSFA declined to comment about whether sea lice levels at salmon farms in the Discovery Island exceeded the DFO limits.

Mowi West said it undertakes sampling to assess sea lice on juvenile salmon before and after they pass the company's salmon farms, and that it publishes sea lice data on its website.

As part of economic recovery from the COVID-19 pandemic, and to address the wild salmon crisis, the federal government could act on its former promise to move to closed containment salmon farming, Johns said.

It was an opportunity for the government to create a new normal for aquaculture and address high unemployment in B.C.’s coastal communities, he said.

“If they invest now rather than waiting another five years, they can give certainty to those employed in the sector and the sector itself, and to communities and Indigenous people that rely on wild salmon,” Johns said.

The FLCN announcement followed on the heels of a recent call from chiefs in the Laichkwiltach territory to the B.C. government to shut down Mowi’s Shaw Point operation, after 1,000 Atlantic salmon escaped from the site.

We Wai Kai Chief Brian Assu and Wei Wai Kum Chief Chris Roberts called for the B.C. government to establish a collaborative governance model for fish farms in their territories based on science and Indigenous knowledge, saying the province has failed to engage substantively with the two nations on the issue.

If B.C. fails to come to the table, the Nations will move forward to make a decision on the remaining fish farms in Laichkwiltach territory, the chiefs stated in an email to National Observer Monday.

The FNLC wants the provincial and federal governments to take action and move to closed containment aquaculture immediately.

“No more excuses, distractions, or delays — open-net fish farms are decimating wild salmon populations and First Nations’ ways of life are on the line,” said Chief Dalton Silver, of Sumas First Nation and Union of BC Indian Chiefs fisheries representative.

“We need a collaborative, cooperative transition to land-based containment, with First Nations leading, in order to conserve and protect the species vital to our communities.”

Every time humanity starts manipulating the finely honed evolution of ecosystems we get disasters. Human motives of greed ensure that the cost beefit analysis is skewed to the benefit side with little or no thought to the cost-to-the-environment side. Despite our vaunted intelligence or even the development of artificial intelligence; the complexity, the variables, the unknown unknowns of the natural world, eons in developement, will contrive to confound human endeavors.

This is why humanity, driven by its greedy definition of survival, is succumbing to parasites (human and otherwise), novel pathogens, and existential climate dangers.