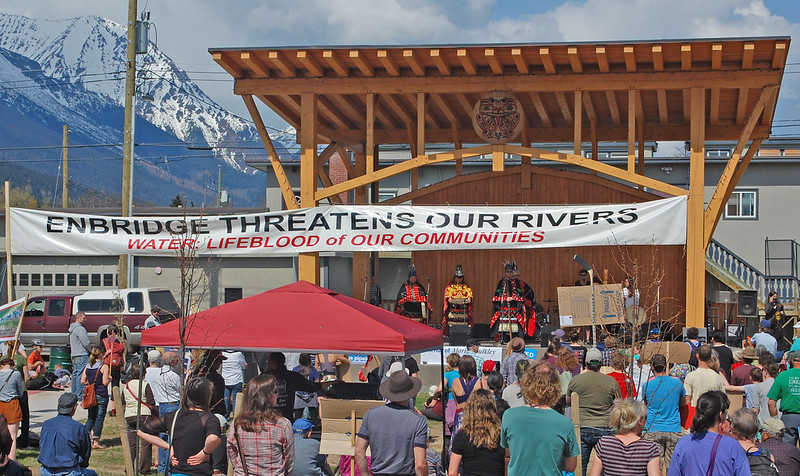 Gathering at a Wet'suwet'en-led Enbridge protest on May 9, 2014. Photo by Francois Depey/Office of the Wet'suwet'en via Leadnow/Flickr (CC BY-SA 2.0)
Previous story
Next story

The British Columbia Civil Liberties Association (BCCLA) has taken the unprecedented step of filing a personal lawsuit against RCMP Commissioner Brenda Lucki over lengthy delays in the release of a report from the force's civilian watchdog.

The Federal Court lawsuit stems from a 2014 complaint lodged by the BCCLA contending the RCMP spied on organizations and Indigenous nations opposed to the Enbridge Northern Gateway pipeline project.

It alleges the RCMP shared the information it collected with the National Energy Board and private oil companies. As previously reported by Canada’s National Observer, the alleged infiltration by the RCMP into grassroots environmental organizations had a chilling effect that left citizens afraid to speak out.

None of the allegations has been proven in court, and a statement of defence has yet to be filed.

As a result of the BCCLA complaint, the Civilian Review and Complaints Commission (CRCC) for the RCMP, an independent agency created by Parliament in 1988, launched an investigation. The CRCC completed its interim report in June 2017 and waited for the RCMP to respond.

The CRCC — and the BCCLA — are still waiting.

“We are suing RCMP Commissioner Lucki personally,” Paul Champ, legal counsel for the BCCLA, told Canada's National Observer. “The primary court remedy we are seeking is personal in nature. It is a court order directed at a specific public official to perform a certain statutory duty.”

The BCCLA’s lawsuit claims Lucki has breached her obligations under the RCMP Act, which states that an answer to the CRCC interim report should be given “as soon as feasible.”

The CRCC cannot issue a final report without response from the RCMP, and by failing to respond, Lucki is also violating the BCCLA’s charter right to freedom of expression, the lawsuit alleges.

“The RCMP commissioner broke several promises about when she would complete her review,” said Champ, referring to multiple instances outlined in the court document where Lucki missed her own deadlines. “We also learned this year from the CRCC annual report that there are many other complainants who are waiting years to get a response to their complaints.”

In some cases, Champ said they involve very serious allegations of police abuse and excessive use of force.

“We are hoping a strong judgment by the court on the delay in this case will compel the RCMP to treat public complaints with the seriousness and respect they deserve,” said Paul Champ, legal counsel for the B.C. Civil Liberties Association.

In the report, the CRCC noted that in December 2019, the commission and the RCMP signed their first operations memorandum of understanding (MOU), imposing, among other things, “timelines for the RCMP to respond to commission reports.”

Specifically, it states the RCMP must respond to commission reports within six months. However, there appears to be a loophole.

“The MOU is not retroactive,” Caroline Duval from RCMP media relations in Ottawa wrote in an email to Canada's National Observer.

“Therefore, the service standard does not apply to reports given to the RCMP before the MOU was signed.”

Nonetheless, Champ, on behalf of the BCCLA, sent a letter on June 23 to the RCMP complaining about response delays.

Another month and a half went by. Then, on Aug. 7, Lucki responded with a letter blaming the delayed response on “the initial misdirection of your correspondence, coupled with workplace complications arising from the COVID-19 pandemic.”

Lucki acknowledged the RCMP’s tardy response to the CRCC’s report in this matter “has not been ideal.” She further suggested the delay may have been due to the desire on the part of the commissioner and her staff to provide meaningful responses.

Lucki concluded her letter by stating she would try to provide the CRCC chairperson “with my response to the interim report within 90 days.”

This still has not happened.

“We are seeking a declaration that the RCMP commissioner breached the RCMP Act through this inexcusable delay, and also a declaration that the RCMP violated the BCCLA's charter right to freedom of expression,” said Champ. “The Supreme Court of Canada has held that a derivative right to the freedom of expression is the right to access government information to express those opinions. It is clear there are systemic problems here, as the RCMP commissioner routinely disregards or ignores CRCC reports for years on end.”

The RCMP informed Canada's National Observer that the police force has developed a plan to prioritize outstanding CRCC interim reports. Efforts are also underway to increase the number of personnel responsible for review and analysis.

“We can tell you that the commissioner advised the BCCLA that we are on track to provide our response to the CRCC by Nov. 21,” said Duval.

While the BCCLA is not seeking damages, it does appear to be adding pressure to Lucki by naming other actors in the application.

“The application also names the attorney general of Canada on behalf of the RCMP,” said Champ. “And we name the B.C. solicitor general as an interested party, because the conduct allegedly took place within B.C.”

As for a remedy, the BCCLA is asking the court for five things: a declaration that Lucki has breached her duties, a declaration that the BCCLA's freedom of expression has been violated, a response to the interim report within 14 days, legal costs and “such further and other relief as counsel may request and this Honourable Court may permit.”

“If the commissioner doesn’t comply with a court order to respond within 14 days, she can be held in contempt of court and subject to fines and even imprisonment,” said Champ. “So, hopefully, she would comply.”

The BCCLA is looking at the bigger picture, with the court action designed to force change at the RCMP.

“We are hoping a strong judgment by the court on the delay in this case will compel the RCMP to treat public complaints with the seriousness and respect they deserve,” said Champ. “Many who are victims of police abuse are not in a position to challenge the RCMP delays in court. But the BCCLA is. Enough is enough.”

Feb. 6, 2014: The British Columbia Civil Liberties Association (BCCLA) submits a complaint to the Civilian Review and Complaints Commission (CRCC), alleging that members of the RCMP had illegally monitored environmentalists and violated their constitutional rights.

August 2018: The BCCLA is informed by the CRCC that the commission had sent a copy of the interim report to the RCMP commissioner on June 13, 2017, and had not received a response.

December 2019: The CRCC and the RCMP conclude a memorandum of understanding (MOU) providing an express timeline that requires the RCMP commissioner to respond to a CRCC interim report within six months.

June 23, 2020: Legal counsel for the BCCLA writes to the RCMP commissioner, citing her statutory duty to respond to the interim report and the MOU setting out a six-month timeline. At this point, the BCCLA’s position was that the commissioner had already breached her duty under the RCMP Act to provide a written response to the CRCC “as soon as feasible.”

Aug. 7, 2020: The RCMP commissioner responds to the legal counsel for the BCCLA. In her letter, Brenda Lucki states that the time taken to respond “has not been ideal.” She further advises: “I committed to the CRCC chairperson that I would try to provide her with my response to the interim report within 90 days.”

Nov. 9, 2020: The BCCLA initiates legal action in Federal Court, naming commissioner Lucki personally, in order to force a response to the interim report.

A CRCC report should be made

A CRCC report should be made public by default if the RCMP does not respond within 90 days.