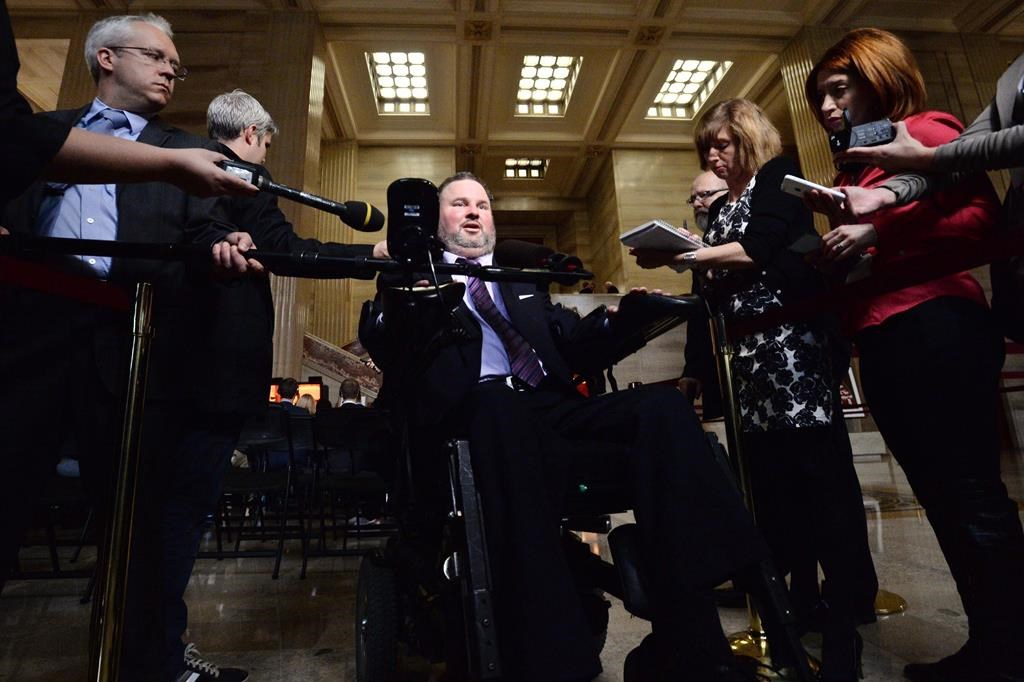 Conservative MP Steven Fletcher talks with reporters in the foyer of the Supreme Court of Canada in Ottawa on Wednesday, October 15, 2014. File photo by The Canadian Press/Sean Kilpatrick
Previous story
Next story

The determination of two Quebecers with disabilities to decide when their suffering had become intolerable persuaded the federal government to rewrite the law on medical assistance in dying.

But now advocacy groups for persons with disabilities are the most fierce opponents of the legislation.

Bill C-7 attempts to strike a balance between an individual's right to personal autonomy and self-determination and the need to protect vulnerable people who might feel pressured — either directly or indirectly by societal attitudes and a lack of support services — into seeking medical help to end their lives.

It would make it easier for people whose natural death is reasonably foreseeable to receive an assisted death. But it would impose added eligibility hurdles for those who are not near death — safeguards added specifically to help protect the vulnerable.

Those safeguards have done nothing to mollify disability advocates who believe the bill sends a message their lives are not worth living.

"Our biggest fear has always been that having a disability would become an acceptable reason for state-provided suicide," Krista Carr, executive vice-president of Inclusion Canada, told the House of Commons justice committee Tuesday.

"Bill C-7 is our worst nightmare."

Catherine Frazee, professor emeritus at Ryerson University's School of Disability Studies, argued that the government is making it possible for people with disabilities to kill themselves while doing whatever it can to prevent suicide for everyone else.

"Why only people whose bodies are altered or painful or in decline? Why not everyone who lives outside the margin?"

Roger Foley, a 45-year-old with a neurodegenerative disease that has left him hospitalized, unable to move or care for himself, recounted how he's been denied home care and allegedly been pressured by hospital staff to seek an assisted death.

"My life has been devalued. I have been coerced into an assisted death by abuse, neglect, lack of care and threats," said Foley.

He has launched a court challenge based on his right to an "assisted life."

Carr told the committee that "every national disability organization is opposed" to Bill C-7 but their voices are "are getting drowned out by people who do not experience the systemic marginalization, the poverty and the very difficult lack of supports and life circumstances that people with disabilities experience that lead them into situations where MAID (medical assistance in dying) is either promoted to them or they feel like it's their only option."

But while disability rights organizations may be united in opposition to the bill, the individuals they purport to represent are not.

"They cannot possibly represent and speak for all persons with a disability. Obviously, because you know they don't speak for me," Sen. Chantal Petitclerc, who won multiple medals as a Paralympic athlete, said in an interview.

She is sponsoring Bill C-7 in the Senate.

Nor, she said, do they speak for Nicole Gladu or Jean Truchon, the two Montrealers who successfully challenged a provision in the assisted-dying law that restricted the procedure to those people whose natural death is reasonably foreseeable.

Neither Gladu, who uses a wheelchair due to post-polio syndrome, nor Truchon, who lost the use of all four limbs due to cerebral palsy, qualified for an assisted death because they weren't near death.

Last fall, Quebec Superior Court Justice Christine Baudouin struck down the foreseeable death restriction as an infringement of the guarantee of "life, liberty and security of the person" under the Charter of Rights and Freedoms.

She gave the government six months to amend the law — since extended to Dec. 18 — and, in the meantime, granted an exemption to Gladu and Truchon to seek an assisted death immediately. Truchon did so in April.

Prime Minister Justin Trudeau's government chose not to appeal the ruling and Bill C-7 is intended to bring the law into compliance.

Petitclerc, who sits as a member of the Independent Senators Group, opposed the original assisted-dying law in 2016 because it excluded people suffering intolerably from disabling conditions who weren't near death. She warned at the time that there is "a fine line between protecting the vulnerable and patronizing them."

She thinks the government has struck a better balance in C-7.

She noted that for anyone not near death, the bill would add a number of new safeguards. That includes an explicit requirement they be informed of all available means to relieve their suffering, including counselling services, mental health and disability support services, community services and palliative care, and be offered consultations with professionals who provide such services.

As well, one of the two medical practitioners who assess eligibility must have expertise in the person's medical condition. Both must agree the person has seriously considered alternative means to relieve their suffering.

"I feel that this offers protection, safeguards, without being patronizing," Petitclerc said.

Steven Fletcher, a former MP, federal cabinet minister and Manitoba member of the legislative assembly, said the new safeguards and talk of protecting the vulnerable are "insulting" and "condescending."

Fletcher, who has been living with quadriplegia the age of 23 after his car hit a moose, said he believes people with disabilities should have the same right, under the same rules, as everyone else to decide when their suffering has become intolerable.

He said there is a huge range of disabling conditions and argued no one, including disability rights groups, can decide for someone else what is tolerable.

"Everyone is a minority of one," Fletcher said in an interview.

After listening with dismay

After listening with dismay and some disgust to the arguments presented against Bill C-7 on the CPAC channel I am left with questions for the PC Caucus?
Why this avid pursuit and denigration of legislation that simply offers more choice to people with life threatening conditions and a degree of suffering most of us do not have to endure? Why this tedious repetition of the conspiracy theories from disability organizations that the world is out to kill them all off?

These points of view presented as legitimate arguments to halt the passage of Bill C-7 are the gravest insult I can imagine to the thousands of medical and care workers who toil in ways that MP's have never experienced, and apparently can not imagine. Without wishing to cast unnecessary aspersions, quoting the paranoid ideations of persons with severe disability who have distorted perceptions of the care provided to them is not particularly objective or supportable.

The disabled are quite within their rights to lobby for improved living conditions. Modern society, with all its institutionalized governmental and charitable helping agencies has not been able to keep up with the onslaught of severely compromised individuals who are alive only because medical science has made their lives possible. The morals and ethics of such actions are subject to much deserved and continuing debate. Bill C-7 does not in any way provide solutions to these dilemmas without the consent of the disabled. Perceived pressure to end their lives is perhaps inevitable among those who see themselves as burdens.

Their lives, no matter how much effort is poured into supporting them may well be high on the intolerable scale. That does not give anyone the right or the license to curtail them - except the disabled themselves.