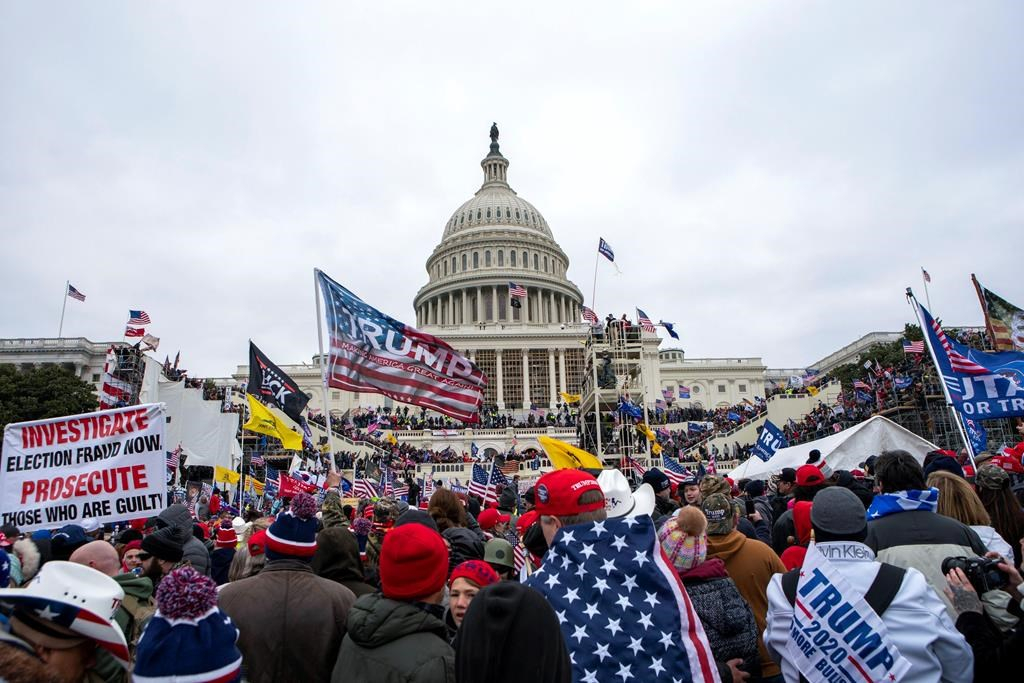 Authorities are collecting information about the right-wing Proud Boys group as part of a possible terrorist designation, the federal Liberal government said Sunday as it faced calls to ban the organization over its role in last week’s Capitol Hill riot.

Public Safety Minister Bill Blair’s office stopped short of saying when — or even if — the Proud Boys would actually be added to Canada’s national list of terrorist organizations, which includes such groups as al-Qaeda, Hezbollah and the Islamic State.

Blair spokesman Mary-Liz Power instead specifically named it as one of the “ideologically motivated” extremist groups that are being closely watched as Ottawa looks to counter the threat posed by white supremacists and other right-wing organizations.

“Our national security and law enforcement agencies are very actively engaged in monitoring the activities of these groups, and gathering the evidence required to support a determination of listing as a terrorist organization,” Power said in an email.

Founded by Canadian Gavin McInnes, the Proud Boys are a right-wing group that is unapologetically misogynist and increasingly linked to white supremacy and hate. It was later banned by Facebook and Instagram in October 2018 for violating their hate policies.

The group first made headlines in Canada when several self-identified members in the Royal Canadian Navy disrupted an Indigenous protest in Halifax in 2017, and has since grown its international profile and membership.

U.S. President Donald Trump famously declined to condemn the Proud Boys during a U.S. presidential debate with Joe Biden in September, instead telling the group to “stand back and stand by.” He later joined Biden in denouncing the group.

Several members were nonetheless among those who stormed Capitol Hill in Washington, D.C., following a speech by Trump last week, according to numerous media reports. In response, NDP Leader Jagmeet Singh has led calls for the federal government to ban the group from Canada.

Power did not say when authorities first started monitoring the Proud Boys as a potential terrorist threat.

“Terrorist designations are not political exercises,” she added. “They involve a legal process requiring evidence and intelligence.”

Created in the aftermath of the terrorist attacks on the U.S. in September 2001, the terror list includes more than 50 organizations. Groups on the list may have their assets seized, and there are serious criminal penalties for helping them carry out extremist activities.

Many of the listed organizations are Islamic terrorist groups such as al-Qaeda, Boko Haram, Hezbollah and the Islamic State, but two right-wing groups — Blood & Honour, an international neo-Nazi network, and its armed wing, Combat 18 — were added in June 2019.

Queen’s University terrorism expert Amarnath Amarasingam described the Capitol Hill riot as the type of “watershed event” that often sparks debate around whether to classify a specific organization as a terrorist group.

While the government and law-enforcement agencies will need to rationalize adding the group to the list, Amarasingam suggested that wouldn’t be hard even as he dismissed suggestions such a decision is not political.

“We basically would not be talking about the Proud Boys if there wasn't a sea change happening right now with how governments, social media companies, and communities are dealing with far-right groups. It's not only political, but it's very much political,” he said.

“Governments want to send a message that this sort of thing is not going to be tolerated, and that applies to far-right groups as well. I think it's about time.”

I hate those worthless

I hate those worthless buckets de scum, but I would have to admit the Proud Boys probably aren't actually a terrorist group, although there are doubtless a few terrorists in it and membership will probably tend to encourage people with such tendencies to eventually become terrorists.
But Hezbollah isn't a terrorist group either and hardly anyone complains about them being on the list.

Any group can be labelled a

Any group can be labelled a terrorist group if it spreads hate. The question for me is how does it come to this? Why do boys seek 'honour' in hate and violence? We have to go back to their early school days where the wisdom from some adults is - beat up the bully, stand up to him. Then we learn as we grown that our institutions are addicted to power. The winner is the most skilled at playing power games. The party/club/interest is destroyed just as patriarchy has destroyed civil society when it chooses misogyny. A civil society cannot exist for long without the soft power of insight and nurture.

You're right about Hezbollah.

You're right about Hezbollah. But on precisely that note, it may be time we acknowledge some of these right wing white supremacists are likely more dangerous to us and our country. Time should be up for white exceptionalism.........after so many terrorist tragedies that have been orchestrated by white men. Perhaps acknowledging the real crazies would be a preliminary step to getting them some help.....they sure do seem to need it.