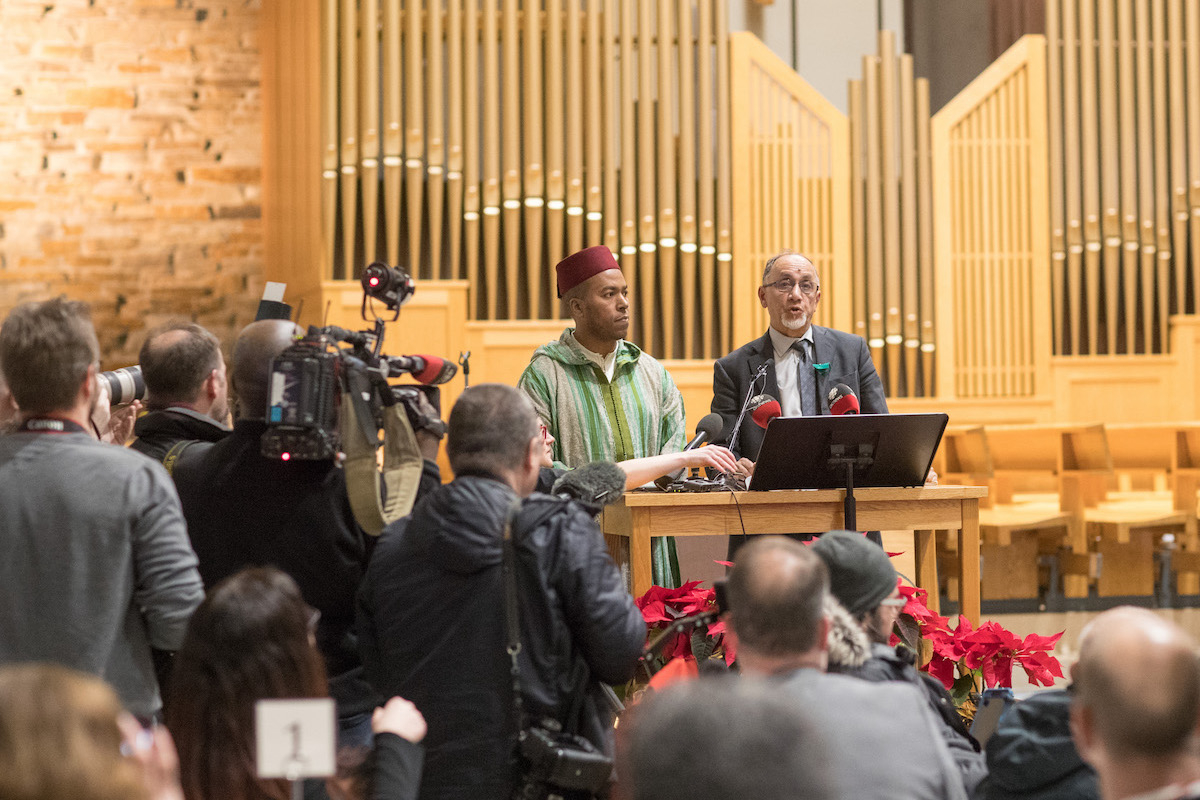 Boufeldjah Benabdallah, right, and Abdelrahim Qaq, left, imam of a local mosque, at a 2020 commemoration event remembering the victims of the Quebec City mosque shooting. Photo by Muriel Leclerc
Previous story
Next story

This is the second in a three-part series on the fourth anniversary of the Quebec City mosque attack. You can read Part 1 here and Part 3 here.

Unjust and deceptive: that was how Boufeldjah Benabdallah described a Quebec Court of Appeal decision that found Alexandre Bissonnette’s sentence of life in prison with no chance of parole for 40 years unconstitutional.

Benabdallah is spokesperson for the Islamic Cultural Centre of Quebec — the mosque Bissonnette targeted in his deadly attack on Jan. 29, 2017. Friday is the fourth anniversary of that horrific night.

Benabdallah was reacting to a Nov. 26, 2020 decision that reduced Bissonnette’s period of inadmissibility for parole from 40 to 25 years.

The panel of three judges struck down a sentencing provision that allows judges to impose stacked sentences, consecutive 25-year periods of parole ineligibility for each first-degree murder conviction. The court ruled such lengthy sentences were unconstitutional under Section 12 of the Canadian Charter of Rights and Freedoms, which protects offenders from cruel and unusual punishment.

“The whole community thought that this decision was unjust. We never thought they would reduce it from 40 years. Even 40 years is insufficient,” says Ahmed Cheddadi, one of the 40 survivors of the attack. “At least, we hope he (will) never pass by one of the orphans on the street,” he says.

Nearly two years ago, on Feb. 9, 2019, Justice François Huot read all 246 pages of the original judgment over what felt like an endless six hours. The courtroom was packed, and more than two dozen court officers stood three metres apart staring at the audience, quick to jump on anyone who pulled out a phone to scroll on social media, or whisper something to someone next to them.

Court security was heightened. With the officers staring at the mostly racialized crowd, it gave the perverse impression that the hundreds present, including survivors and family members of the victims, were under more scrutiny than the man at the front of the room.

The decision to give Bissonnette 40 years before he could apply for parole, argued Huot, was a compromise between the severity of Bissonnette’s crimes and the expectation that incarcerated people have some hope of life outside prison walls so that they seek rehabilitation. Huot’s sentence stacked 25 years for the murders of Ibrahima Barry, Mamadou Tanou Barry, Khaled Belkacemi, Aboubaker Thabti, Abdelkrim Hassane and Azzedine Soufiane, with 15 years for the attempted murder of 40 survivors of the attack.

For Quebec’s Muslim community, the constitutional questions of reducing Alexandre Bissonnette's parole eligibility from 40 years to 25 are far less important than the betrayal they feel. @NoLore reports

Both the Crown and defence appealed the decision. Gathered in the same room as the year before, under the eyes of far fewer security agents on Jan. 27, 2020, both sides argued the judgment was unreasonable: the Crown argued that it was too lenient, the defence that it was unconstitutional.

A constitutional challenge and a community let down by the state

Balancing the victims’ desire for justice with a punishment that is not cruel and unusual is, at the best of times, difficult. When the victims are marginalized by Canadian society and the perpetrator is white, it can be even harder, as white supremacy and racism are woven throughout Canada’s legal system. But prisoner rights advocates argue increasingly harsh sentences ultimately cause the most harm to Black, Indigenous and racialized people.

Prisoner rights advocate and professor El Jones sympathizes with the victims’ families and survivors and says it’s important to see their pain through the lens of a community constantly let down by the state. After years of being demonized by journalists, community members would of course be disappointed, she says, by a sentence that didn’t garner the same number of years as other cases like that of Justin Bourque in New Brunswick, where the three victims were white police officers.

“The only thing people have is this one case: surely, this is cut and dry. Surely, this one case, and then you didn’t even punish him as much as this guy over here,” Jones says, anticipating the logic of the community.

Bissonnette’s crimes came after years of hateful actions in Canadian society: racist acts taken against the mosque, increasingly violent rhetoric in mainstream media, especially in Quebec City’s famous trash radio ecosystem, and outward Islamophobic attacks on individuals. None of it was taken seriously enough by authorities, the city or non-Muslim Quebecers, even when it was clear the threats were increasing in intensity.

Of all the cases to become the subject of a constitutional challenge, why choose this one, which had already caused so much pain for this marginalized community?

University of British Columbia law professor Debra Parkes agrees it’s unfortunate for everyone impacted that this challenge happened with Bissonnette’s case. But she says it was only a matter of time before this law would be challenged. Defence lawyers had raised the constitutionality question before.

In 2011, as part of Stephen Harper’s so-called tough-on-crime reforms, the law was changed to eliminate the 25-year maximum for first-degree murder. This allowed judges to impose consecutive periods of parole ineligibility. Crown prosecutors could seek sentences of hundreds of years in jail before someone was eligible for parole. The change pushed the punishment meted out by Canada’s justice system closer to the extreme end, compared to European and Australian legal systems, says Parkes.

The 2011 reforms also created several new mandatory minimum sentences. Parkes says the Supreme Court has found some of these unconstitutional because a critical legal feature gives judges the ability to tailor a sentence to account for unique factors.

However, past challenges of consecutive sentences without parole eligibility were unsuccessful because stacked sentences are not mandatory. They are case-specific and imposed at the discretion of a judge.

The Quebec judges based their decision solely on Section 12. Court of Appeal judges François Doyon, Guy Gagnon and Dominique Bélanger argued a system that doesn’t allow someone to apply for parole until they are dead fits the definition of cruel and unusual.

Research examining stacked sentences done by Parkes, Isabel Grant and Crystal Choi, found that between Dec. 2, 2011 and Aug. 31, 2020, there were 54 sentences passed for people who committed multiple murders. Judges imposed stacked sentences 43 per cent of the time. Of these, five were agreed to by both the Crown and defence. (It’s important to note 54 cases is a small sample size.)

Parkes says it’s not too surprising the ruling that found stacked sentences unconstitutional came out of Quebec. Quebec judges tend to hand down less punitive sentences in general, and were the first to find other Harper tough-on-crime laws unconstitutional, she adds.

The Bissonette appeal decision is already having an impact in Quebec. On Jan. 8, Ugo Fredette was given a life sentence and 25 years without parole eligibility even though the Crown sought 50 years for two murders.

Quebec’s appeal court ruling does not bind judges in other provinces. So for now, while stacked sentences are unconstitutional in Quebec, a judge in Alberta can still sentence someone to life in prison with no chance of parole for 50 or more years. On Jan. 15, the Crown announced it would seek leave for the case to be heard at the Supreme Court.

For Quebec’s Muslim community, the constitutional questions are far less important than the betrayal they feel. They will never know if the same decision would happen had the victims occupied a more powerful social status, like white police officers. The social impact of white supremacy and Islamophobia cannot be divorced from this case.

Regardless of an appeal, a life sentence is still a life sentence. Canada’s most violent offenders spend their life in jail, and regardless of how many years pass before Bissonnette can apply for parole, it’s very possible Bissonnette will never leave jail. Parole hearings are important, as they give people the hope they might be able to leave jail, but only if they work on self-improvement. With zero or extremely slim hope of living outside the walls of a jail cell, what incentive would someone have to do that kind of work? Or what incentive would they even have to live as well as they can while behind bars?

“Part of the punishment regime in Canada is always about extending the ways in which punishment takes place,” says Jones. She argues pushing for longer and longer sentences ultimately intensifies white supremacy within the legal system.

“The reason for why we should care about this is not necessarily because Bissonnette is a source of empathy but because … these sentences largely extend to Black and Indigenous communities and become another form in which people of colour ultimately become victims, which is always what happens when we extend the law.”

The big question this article

The big question this article does not address (maybe because it is too big) is "how do we de-racialize the justice system?" The way the system is supposed to work is that elected representatives (parliament) make the laws appropriate for our society, the judiciary apply those laws, and the constitution sets the standards and boundaries to ensure that individuals' rights are protected in this process of protecting society. Clearly this is systemically failing across Canada (cf. Desmond Cole's The Skin We're In). Racially perjorative application of laws is widespread despite the constitutional requirement that this not be the case. The simple (and wrong) solution is to reduce judicial discretion; this would cause other problems of perceived fairness and would cause poorly conceived laws to do more harm before they are corrected by the legislature. I respectfully suggest a lasting solution is nothing less than addressing the even bigger question "how do we de-racialize Canadian society?"

My heart goes out to the Islamic community at the centre of this case. I can't imagine how betrayed and marginalized they must feel that their case has become the focus of the constitutional challenge asserting the defendant's rights.