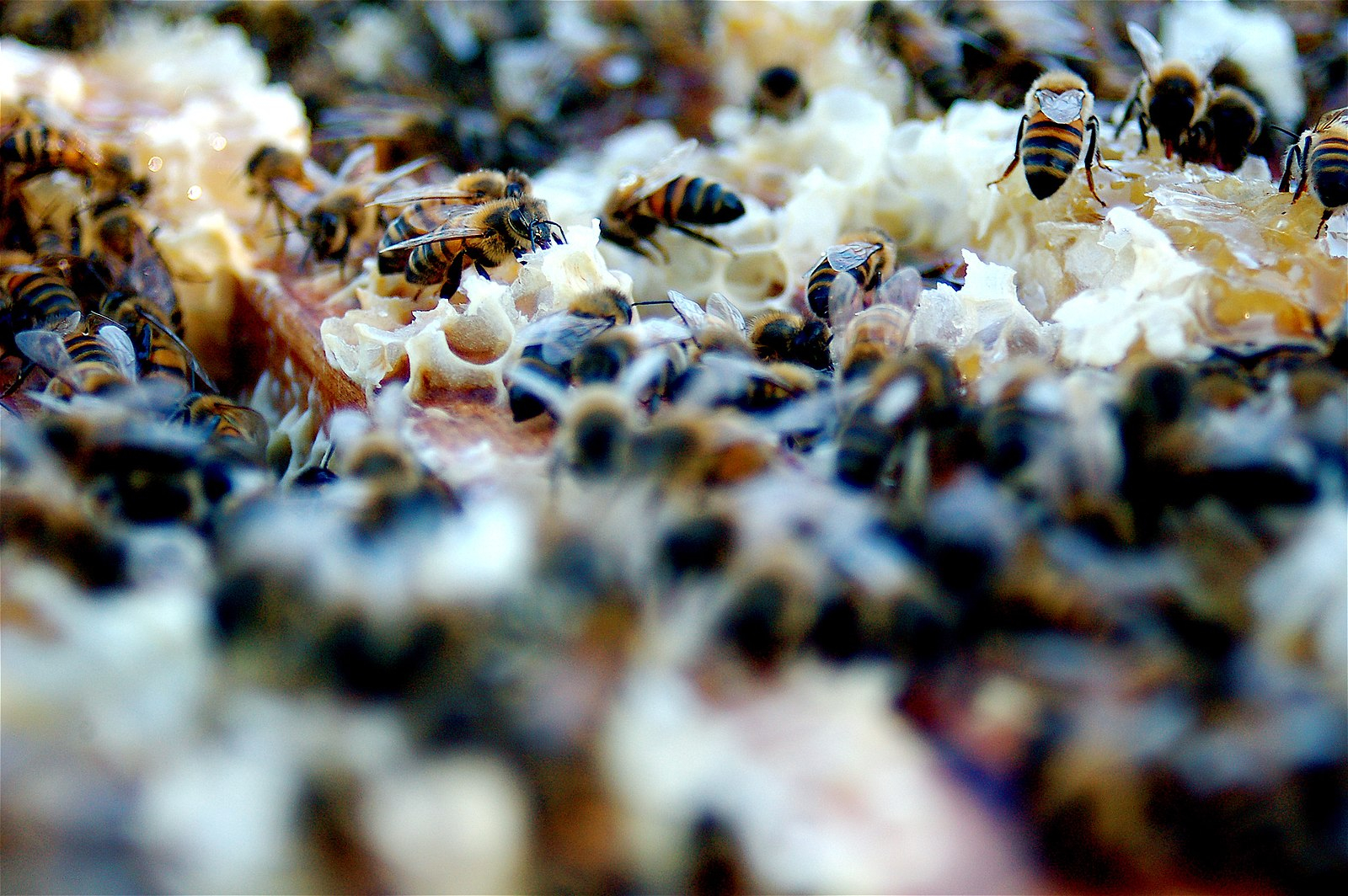 The federal government last week announced that it will not ban a class of pesticides known to harm bees, aquatic insects, and the ecosystems that depend on them. Photo by Todd Huffman / Wikimedia Commons
Previous story
Next story

Pesticides harmful to bees, water bugs, and other insects will continue to be allowed for use on Canadian fields and lawns.

The announcement marks a dramatic shift in the government’s approach: In a 2018 scientific review, the PMRA recommended the chemicals be banned to protect aquatic insects and their ecosystems.

The agency delayed its final decisions on the chemicals for two years while considering additional data on toxicity and insects’ level of exposure in natural environments.

“It is surprising and disappointing,” said Lisa Gue, senior policy adviser for the David Suzuki Foundation. The organization is among a handful who slammed the decisions when they were announced last week. “The decision ... is simply not a credible response to the risks identified.”

In its final decisions, the agency said risks to aquatic insects will be adequately mitigated by reducing application rates and banning their use in a few specific cases. Most uses of the pesticides will be allowed to continue, however. The decisions also required the application rates listed on the product labels to be reduced within the next two years.

“Based on the updated scientific assessment, it was determined that certain uses did not pose an acceptable risk to aquatic insects, and they will be cancelled. Other uses require additional mitigation measures. With these mitigation measures in place and when neonicotinoid pesticides are used according to the revised label directions, the risks to aquatic insects from the use of these products are acceptable,” Health Canada said in a statement.

The PMRA will enforce the usage guidelines printed on the updated labels through “compliance verifications” and can pursue legal charges against farmers who breach them, the agency said.

For Gue, those measures are “simply inadequate.”

“The regulatory agency, instead of proceeding with the proposed phaseout of these chemicals, has decided to simply tinker around the edges,” she said.

“The regulatory agency, instead of proceeding with the proposed phaseout of these chemicals, has decided to simply tinker around the edges,” said Lisa Gue of the @DavidSuzukiFDN.

Neonics are a class of water-soluble insecticides that damage insects’ nervous system, said Nigel Raine, a professor of environmental science at the University of Guelph who studies pollinators. Commonly applied as a spray to fields, or directly on plant seeds, they’re designed to be absorbed by plants, protecting crops from the pests trying to eat them.

However, studies have found the chemicals in ponds, marshes, and streams contaminated by runoff from fields. They are also absorbed into plants' pollen, exposing the bees and other pollinators feeding off the contaminated plants.

Aquatic insects and ground nesting bees — the lesser-known, native relatives of honeybees who are important pollinators — are particularly vulnerable because they are immersed with the chemicals for most of their lives, Raine explained.

Those exposures can have a vast impact.

“If you have enough of these things, the end point is lethality — they kill organisms,” he said. “But below lethal concentrations — which is what we’re talking about in the field, hopefully — the impacts are more subtle … for example, with bees we see impacts on learning and memory. They are less able to remember odours they’ve encountered before. They forage less effectively, they collect less pollen, it can affect their orientation.”

Those impacts can accumulate and ultimately make it more difficult for the insects to reproduce and maintain healthy population levels, he said.

About 85 per cent of the world’s crops depend on bees and other pollinators to bear fruit; without them, humans would struggle to produce enough food. But despite their importance, the world’s pollinators are in rapid decline.

Earlier this year, researchers estimated that roughly a quarter of the world’s bee species are in decline and could go extinct. In North America, bumblebees — a vital native pollinator — are estimated to have seen their relative abundance crash by 97 per cent, with the sharpest decline occurring in the past 30 years, a 2011 study found.

But pollinator decline isn’t the only threat posed by neonics.

“(The problem) is at a landscape and ecosystem scale,” said Raine. Fewer aquatic insects mean less food for birds, fish, and other animals, leading to much broader impacts on ecosystems and biodiversity. That concern is echoed by Gue, who described the deadly impact of neonics on aquatic insects as a “canary in the coal mine,” pointing to ecosystem collapse.

Still, while eliminating the chemicals and equally harmful substitutes will help pollinators and other insects survive, deeper changes in how we grow food are needed. Monocropping — the dominant method used to industrially grow food in North America — requires pesticides.

Researchers have pointed out that more diversified crops can benefit yields and biodiversity, yet monocropping remains widespread. That means minimizing the immediate harm posed by neonics and other chemicals is essential, Raine explained.

“If we’re going to keep farming in the way we are at the moment, we are going to need some of these products, and understanding which of the products are the safest and cause the least harm is going to be a very key part of that sustainability mandate,” he said. Making sure those chemicals don’t cause the same ecosystem-wide problems as neonics before they are widely used is essential.

“That’s a very important lesson we should take from the neonicotinoid story, and make sure we learn from the unintended errors we’ve made in that journey,” he said.

will we ever know if

will we ever know if reversing on neo nics was the price for big pharmas sending us vaccines for covid. ??? dont they call that negotiating ? in the world where money and power are the only consideration ---- planetary life systems be damned!!!

Regulator: Well, you know, just because they're carefully designed to be lethal to insects doesn't mean we should expect them to kill insects. That would just be crazy talk.

Well, if we are going to

Well, if we are going to indulge in conspiracy theories let's just acknowledge that major corporations have lost the capacity or the need to care about the actual quality, utility or safety of the products they sell. They are big and wealthy enough to fend off any threats to their profits through endless legal maneuvering and lavish lobbying. The bureaucrats charged with regulating and controlling these behemoths are always at risk of losing their livelihoods if they recommend decisions that challenge corporate profits.

The politicians that ultimately make and deliver those decisions are too easily compromised by party fund raising pressures, and individual campaign financing considerations. Justice delayed is justice denied. Essential decisions delayed, are essential decisions denied - until it is too late, too little and futile.

Good grief. Neonics are used on agricultural crops. How in tarnation does risk to insects in "natural environments" even enter the picture? Bees feed mainly on agricultural plants, not some mythical "natural" environment. Isn't that a big part of why bee colony collapse is such a big deal? Because when they feed on the flowers of those vegie, berry, nut and fruit plants, they accidentally fertilize the eggs forming within the flower ... and make the fruit. Or the seed for next year.

But I nominate whoever penned this one as Canada's Top Baker of bull-cake:
"The PMRA will enforce the usage guidelines printed on the updated labels through “compliance verifications” and can pursue legal charges against farmers who breach them, the agency said."

As in gimme a break for pitty's sake! Who's going to do these "verifications" and how? How are they to be rendered less susceptible to agricultural "product" lobbying, and more susceptible to the tenets of rule of law (familiar phrase, huh?) and scientific evidence? You know, so that they're not going to wind up as crooked as the ppl who've approved the products yet again!

I wonder if "compliance verifications" is in quotes because the lobbyist who wrote the text for gov't has a grammatically disastrous overfondness for quotation marks, or if they were added consciously: weasel punctuation.