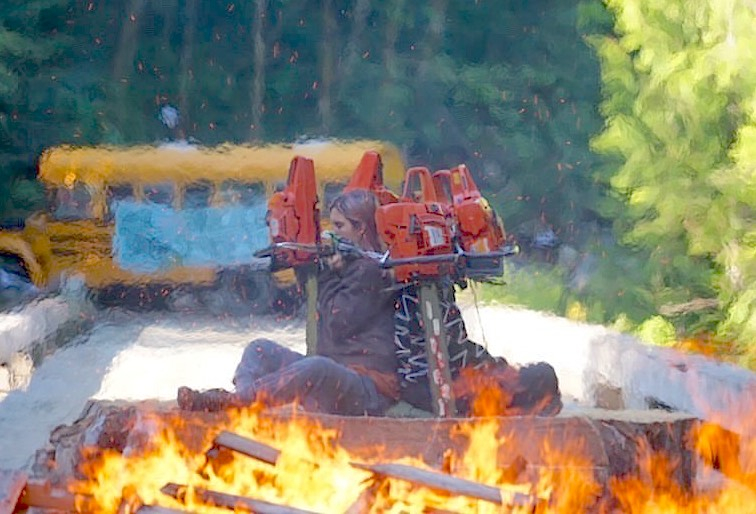 Environmental groups already riled by the pace of protections for ancient forests in B.C. were further provoked after the province failed to announce any new old-growth logging deferrals in its new vision for forestry Tuesday.

“If Premier John Horgan’s intention is to make the conflict raging around old-growth forests even worse, this is the perfect plan to do that,” said Torrance Coste of the Wilderness Committee.

The unveiling of the NDP intentions paper to modernize forestry policy took place as 1,000 protesters defied an injunction over the weekend to support Fairy Creek blockades — happening in Horgan’s own riding on Vancouver Island for the past nine months.

As of Monday morning, RCMP had arrested 142 people in connection to protests in logging company Teal-Jones’s tree farm licence (TFL) 46 near Port Renfrew — which is becoming the epicentre of environmental civil disobedience on a scale comparable to the 1990s War of the Woods in Clayoquot Sound.

The plan — which won’t be complete until 2023 at the earliest — includes worthy goals such as reconciliation and co-operation with First Nations, ensuring more communities benefit from forestry, and diversifying access to tenure and timber supply, Coste noted.

But the NDP government’s vision will do nothing to quell the immediate wildfire of public discord about the lack of protection for big trees and the at-risk ecosystems that support them, he said.

❌ BREAKING ❌ There are now hundreds of people at Waterfall, with OVER 1000 people joining us at HQ today.

WE WILL NOT LET THEM CUT A SINGLE TREE IN FAIRY CREEK.

This is the Last Stand for our forests ✊

“It’s gasoline on the fire. It completely fails to speak to what this moment demands,” Coste said, adding the NDP is losing social licence for its forestry objectives.

“The premier doesn't seem to grasp that everything in this plan is unachievable without immediate-term on-the-ground changes.”

B.C. needs to take urgent action to protect increasingly scarce old-growth ecosystems because forests have been managed solely for timber values for far too long, as the old-growth strategic review commissioned by the province found, Coste said.

“There’s strong public value for all the other important things the forests provide,” he said.

“If Premier John Horgan’s intention is to make the conflict raging around old-growth forests even worse, this is the perfect plan to do that,” said @TorranceCoste of the Wilderness Committee on B.C.'s new vision for forestry policy. #BCpoli

“While there are nods in this plan to change that over the course of coming years, there’s still this denial of the basic reality that we need some immediate stop-gap measures.”

Environmental groups (ENGOs) in the province want Horgan to temporarily defer old-growth logging in the most critical ecosystems, and put money on the table for First Nations that might lose revenue while discussions take place over the longer term.

Horgan reiterated his intent to meet all 14 recommendations in the old-growth review while unveiling the intentions paper Tuesday.

The province was following a core recommendation of the report by ensuring it was consulting with First Nations to avoid making any decisions around forestry in their territories unilaterally, he said.

“The critical recommendation that's at play at Fairy Creek is consulting with the title-holders, the people whose land these forests are growing on,” Horgan said.

Not doing so would smack of colonialism, the harms of which were graphically depicted with the confirmation of a mass grave with the remains of 215 children at a former residential school in Kamloops last week, he noted.

There must be buy-in by area First Nations for any deferrals in the Fairy Creek or other old-growth areas located in TFLs 46 and 44 in the region, he said.

The province made initial old-growth deferrals in nine areas of the province in September and has established the Special Tree Regulation to protect up to 1,500 exceptionally large trees, Horgan said.

As well, a timeline to implement all the old-growth recommendations has been set.

Old-growth activists at blockades aren’t going anywhere after hearing the province’s plan, according to the Rainforest Flying Squad (RFS), the grassroots coalition organizing the movement.

More and more people from all walks of life and age groups are joining the protests, Arbess said, adding more than 90 per cent of British Columbians want protections for old-growth.

“What we’re seeing is essentially business as usual with some modifications and changes, and a greater emphasis on allocation of timber to First Nations.”

But the economic model for relying solely on the extraction of timber is still at play, said Arbess, who had hoped to see funding commitments and initiatives to lay the foundation for other forest values, as was done in the Great Bear Rainforest.

Arbess said he hoped that ENGOs would be among the stakeholders consulted in any coming talks around the NDP’s promise to make additional deferrals — especially since no such groups were present to speak to the plan today, though unions and First Nations were extended the opportunity to do so.

“This is the opportunity to defer the five forest areas that we're trying to protect,” Arbess said.

“But you don't enter into an engagement process while at the same time the lands and forests under discussion are being destroyed.”

Y'know what smacks of

Y'know what smacks of colonialism? Carrying on as though the "elected band leaders" under the Indian Act are the leaders to be reckoned with.
The legal precedent, if I'm not mistaken, is a Supreme Court of Canada ruling that the so-called "hereditary" leaders, selected according to their historical tradition, are the leaders they ought to be consulting, and allowing those leaders time and opportunity to carry out their traditional processes in arriving at their decision.

What smacks of colonialism is in the meantime, having completely ignored to date not only that SOC ruling, but also their own promises to the public, indigenous and otherwise, to protect old growth forests, and in particular the "Old Mother" trees.

They have the power to pull licenses, or to modify them. They can declare an absolute moratorium, or any kind of partial measures, until the situation gets fixed.
This is not a matter of interrupting a process properly licensed, but rather harvesting under a license through a band office, rather than through the lawful leadership of the Nation/Nations in whose territory the desecration is taking place.
I don't think many people are being fooled, any more, by what the mouths are saying about policy, about truth, about rule of law. They've learned to keep their eye on what the hands are doing, while the mouth is moving.

There are two issues about

There are two issues about the elected band leaders. The first is, they're a colonial thing operating under the Indian Act and the department previously known as Indian Affairs (can't remember what it's called now). So we decided how they were going to do elections, and the resulting bosses are embedded in this structure.
The second is, as I understand it they are elected to be basically the mayors of reservations. They aren't the leaders of nations any more than the mayor of Ottawa gets to call himself the Prime Minister of Canada.

That said, I'm not a huge fan of hereditary leadership. "It's traditional" doesn't really cut it for me. Europe in general and Britain in specific has a tradition of hereditary monarchs too, and making them merely symbolic was one of the better governmental things we ever did. Times change, new ideas come along, traditions get set aside or modified, and there's no reason First Nations have to stay stuck in their past any more than we need to be stuck in ours.
But! It's not our business. Their leaders, their decision. We should be dealing with the leaders they have, not the leaders we decided they have. If they want to do things different sometime, that's up to them.
(Arguably many hereditary leaders are less what we think of as "leaders" and more like "hereditary committee chairs" or "hereditary facilitators", which is much less of a problem than "hereditary boss", although I'm still not that sold on hereditary anything)