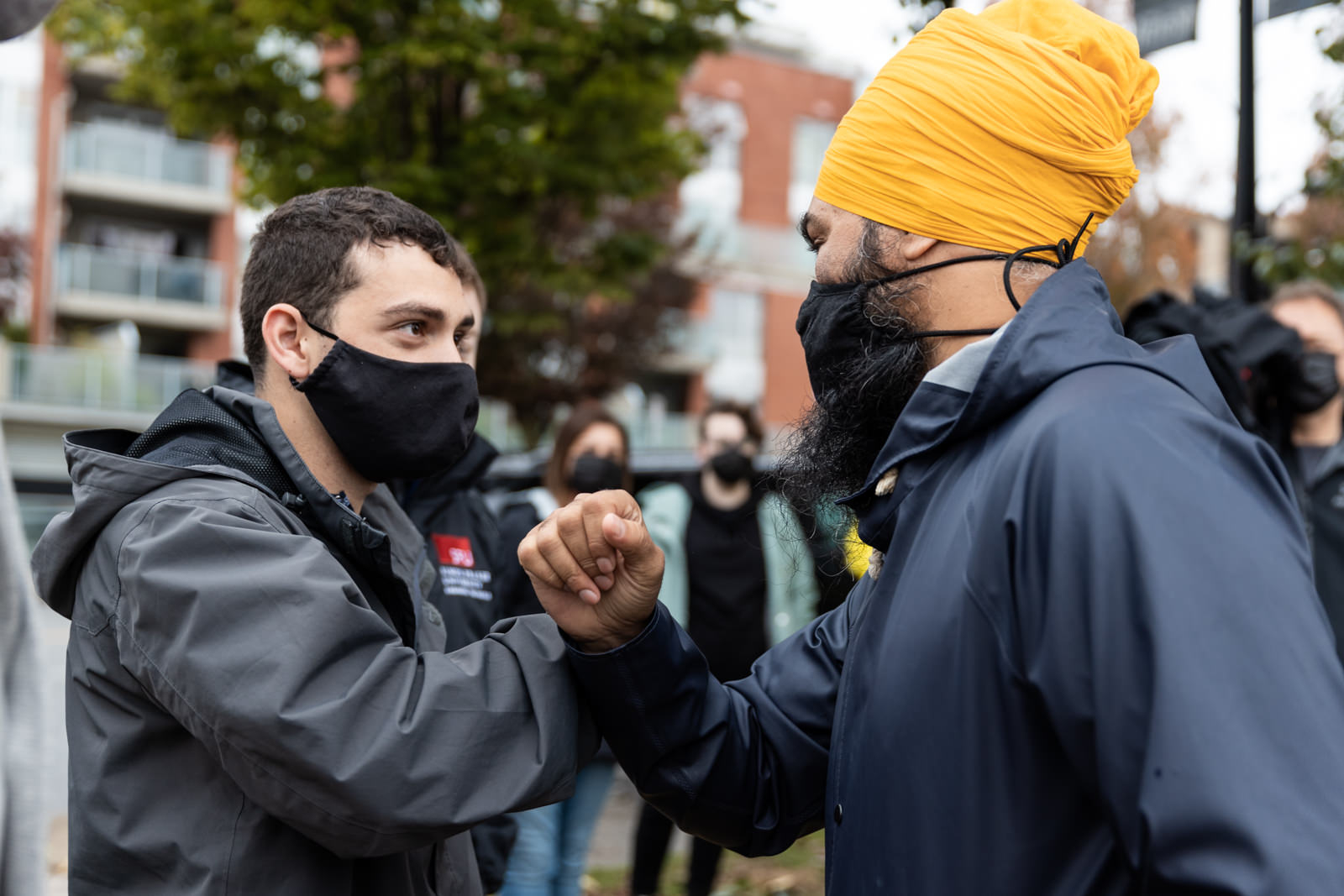 Earlier this month, when the whirlwind 36-day federal election campaign was kicking into high gear, I was driving north through Secwepemc territory, my peoples’ traditional homelands in the mountainous Interior of B.C.. After spending the night in Kamloops, the largest city in the Kamloops-Thompson-Cariboo riding, where I stopped to visit a cousin living on the streets, I continued my journey north. Roadside on the Trans-Canada Highway and then Highway 97, I saw what was for me a symbol of hope: the orange yard signs of the local NDP candidate, Bill Sundhu.

I consider myself a lefty. I support a more compassionate social safety net, a more robust role for the public sector in the economy, smarter regulations — particularly to protect public health, the environment and our climate. I believe immigration and diversity strengthen democracy. At the same time, I support the right of First Peoples to self-determine within and beyond colonial bounds. The NDP has long shared many of these views and values, and so when it comes time to vote, they often have my support. (Though in this election season, as in many before, I am living in the United States. Without a permanent Canadian residence, I am disqualified from voting.)

Yet, sometimes I worry I might regret supporting Canada’s left-wing party — not because the New Democrats aren’t true to their ideology, but because elections are most often won by competing for the voters in the middle. The NDP, after all, has never won a majority of seats at the federal level and has only formed the official opposition once. And in a parliamentary system where the left-of-centre forces are divided between the NDP, Liberals, Greens and Bloc Québécois, the Conservatives hold a structural advantage. They know this — they use it to their advantage all the time, and under their new leader, Erin O’Toole, they tacked towards the centre.

On Monday, the Liberals won a minority government — a much slimmer victory than they had hoped for at the beginning of the campaign, but a victory nonetheless. The NDP, whose leader Jagmeet Singh is the most popular politician in Canada, according to polls, was poised to pick up three seats at deadline. Sundhu, my guy in Kamloops, was not among the victors. The Tories have owned that riding since it was created in 2004, and it was the same story in 2021. As of this writing, Frank Caputo, the Conservative candidate, has won more than 42 per cent of the popular vote, trailed by Sundhu with just under 29 per cent.

Looking at these returns, I wonder if it had to be this way. Conservatives won a convincing plurality of votes, sure, but left-of-centre parties collectively won more. What if they had acted more strategically, communicating the challenge to their voters and presenting a single candidate to take on the right at the ballot box? Or what if progressive voters in the Kamloops-Thompson-Cariboo and across the country had turned to a resource like the Strategic Voting Guide and cast their votes for the left-of-centre candidate with the best chance of victory according to the polls? Why, in a moment when progressive leadership is so badly needed in the fight against COVID-19, against climate change, and against the rise of right-wing authoritarianism aren’t the political minds on the Canadian left working together to defeat our common adversary and advance a common cause? It’s simple arithmetic, after all.

"I am undoubtedly best represented by the NDP. But as a Canadian—and especially as a First Nations Canadian—the more pressing question is always how I will be ruled," #Indigenous #Elxn44 #cdnpoli @jnoisecat writes for @natobserver

As Justin Trudeau and the Liberals set about the hard work of building a minority government, which will require the cooperation of the NDP or Bloc, I find it curious that, on the left, the coalition-building always seems to come after nearly devastating losses. If just a few more ridings had voted like Kamloops-Thompson-Cariboo, O’Toole would be prime minister and I would have rued the day I looked at those little orange signs, a cautious feeling of hope rising in my chest. I am undoubtedly best represented by the NDP, whose resurgence under Singh is one of Canada’s most promising political developments. But as a Canadian — and especially as a First Nations Canadian — the more-pressing question is always how I will be ruled.

Respectfully, we need to stop

Respectfully, we need to stop thinking of the Liberals as left of centre progressive allies; they're centrist at best. They make token gestures to the left because it's electorally useful for them. Once in power, they tinker around the edges to give a veneer of progressiveness but at their core they are primarily a status quo party. The wealthy and powerful dominate the Liberal party machinery just as they do the Conservatives so no truly meaningful movement on climate change or inequality will happen while either party is at the helm. Treating the Liberals as progressive allies undermines the progressive cause and dooms us to perpetual half measures.

Could not agree more.
The writer's premise is that the Liberal Party of Canada is progressive. That may be true of certain Liberals MPs, but that description cannot be applied to leader Justin Trudeau and the Liberal Party.

The Liberal Party represents and works for Corporate Canada. The Business Council of Canada and Bay St call the shots. Political power is concentrated in the PMO, giving MPs (and even govt ministers) little say in formulating policy. Does anybody believe former Environment Minister Catherine McKenna had any say in the govt's energy/climate policy? Her job was to deliver Liberal Party talking points.
The Liberals' fossil-fuel expansionist agenda is a plan to fail on climate. If you're not progressive on climate, you're not progressive.

Trudeau's 2019 mockery of First Nations revealed the arrogance behind the mask.
* https://globalnews.ca/news/5104937/justin-trudeau-protester-liberal-fund...
* https://aptnnews.ca/2019/03/28/unacceptable-and-offensive-trudeau-gets-c...

The duplicitous Liberals will always disappoint.

There is no dilemma. We never

There is no dilemma. We never would've had a snap election if the Liberals really wanted to promote a left-of-centre agenda. As it is currently, the New Democrats are the only good option for federal elections (at least outside of Quebec).

With all due respect I

With all due respect I question this quote, "I am undoubtedly best represented by the NDP, whose resurgence under Singh is one of Canada’s most promising political developments." From my observations, the NDP has not had a resurgence under Singh; that happened under Jack Layton and was decently maintained by Thomas Muchair. The NDP lost almost half it's seats under Singh and then, after $25 million dollars being spent in the last election, Singh only managed to gain one seat. Am I experiencing some alternate universe or is it this author?