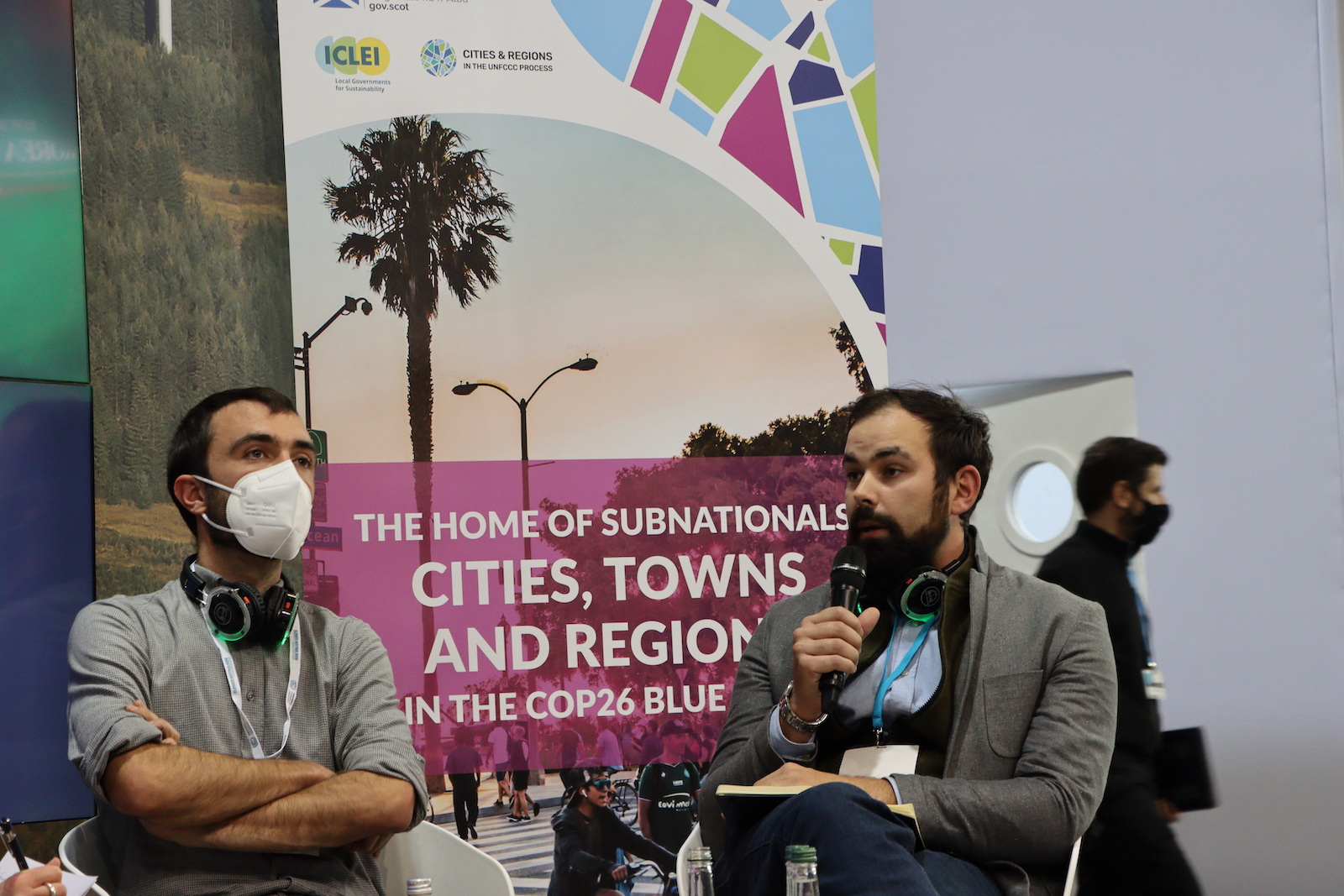 Stuart Oke, an Ontario farmer and youth representative for the National Farmers Union, speaks about the role cities and smaller governments play in food and climate policy at COP26. Photo by Marc Fawcett-Atkinson/Canada's National Observer
Previous story
Next story

Over 100 cities, towns, and other regional governments worldwide informally launched a pledge Wednesday to put food at the heart of their climate plans — even as their national counterparts have failed to do the same.

The Glasgow Food and Climate Declaration unites governments that are implementing cutting-edge policies to promote integrated sustainable food and agriculture and reduce hunger within their jurisdictions. While the declaration brings together signatories from around the world, Vancouver is currently the only Canadian city to have signed onto the pledge.

"Governments need to be paying attention to food and climate, they need to be supporting all the pioneering work local governments are doing," said Chantal Wei-Ying Clément, deputy director of the International Panel of Experts on Food (IPES-Food) and a key organizer behind the declaration. "The intention behind (the declaration) was to make this big, vocal push at COP giving more voice to local governments."

Food accounts for about a third of the world's greenhouse gas emissions, and reducing emissions from the sector is essential if the world is to keep warming within 1.5 C, according to the Intergovernmental Panel on Climate Change. Oxford University-based organization Our World in Data estimates 60 per cent of these emissions come from livestock, fisheries, and crop production. Transportation, packaging, retail, and land-use changes account for the remainder.

In a 2016 report, IPES-Food found that making food sustainable and climate-friendly will require ending industrial agriculture, which is a driving force behind agricultural emissions and biodiversity loss. Governments must also prioritize people's right to food over the profits of food companies to ensure everyone can afford good-quality food and farmers can earn a living wage for themselves and their employees.

Making this change will require a "fundamentally different model of agriculture," the document noted. That includes ending the use of chemical fertilizers, supporting farming systems that bolster biodiversity, and prioritizing human rights through the food system — a suite of practices collectively known as agroecology.

Yet efforts to implement this approach have largely been advocated for by regional or municipal governments and a few nations in the Global South. They have not featured prominently in most national food and agricultural policies — or at the COP26 climate conference currently taking place in Glasgow, Scotland.

The climate conference — also known as COP, short for Conference of Parties — brings the world together to hammer out deals to reduce global warming. The talks gather policymakers, scientists, environmental activists, climate experts, and media from the 197 member countries of the United Nations Framework Convention on Climate Change.

The Glasgow Food and Climate Declaration is aimed at putting pressure on countries to support these regional efforts. It also highlights the lessons they can offer to national or global initiatives aimed at making our food more sustainable, Clement said.

Fixing the problems afflicting food systems independently of one another is nearly impossible, Clement explained. For instance, rules supporting good nutrition, production, and retail are all essential steps in ensuring food security and sustainable farming practices. However, few countries have implemented measures aimed at aligning them towards a common goal to make food sustainable.

Over 100 cities, towns, and other regional governments worldwide informally launched a pledge Wednesday to put food at the heart of their climate plans — even as their national counterparts have failed to do the same. #COP26 #COP26xCNO

"Cities are so close to citizens," she said. "They're a lot more responsive to meet these key questions ... there's a democratic aspect to the local level that is harder to manage at higher levels."

Still, there is only so much they can do: National governments and international organizations control key elements in food production, from agricultural subsidies to food safety rules to climate policies. Ensuring these aren't working at odds with each other in ways that block changes to make food more sustainable is key, she said.

The Glasgow Food and Climate Declaration aims to put these governments' initiatives — especially their focus on farmers, workers, and those most in need of food — on the menu for leaders at COP, Clement said.

In a statement, the City of Vancouver said it "signed onto the declaration because its principles and objectives align strongly with the city's commitment to just and sustainable food systems." The declaration also "resonates with the city's experience that many areas of food policy, in particular those related to climate change, are outside municipal jurisdiction."

The declaration's limited reach in Canada isn't a surprise for Stuart Oke, an Ontario farmer and youth representative for the National Farmers Union. Speaking at a Wednesday panel about the declaration, he pointed out that Canada's largely export-focused agricultural and food policies put the focus "not on people, but on profit first."

"We have this system that pits one noble group against another, and in the middle are international corporations," he said. "We need to put the right to food first, way before the money comes into the process."

I wonder if long-term

I wonder if long-term vegetarian politicians and negotiators would be more amenable to obvious solutions.

The pate-de-fois-gras and sirloin tip crowd won't be in favor, because although they're very OK with people starving to feed their own excessive dietary patterns, they are resistant to making big changes in their own lives.

So are most people, if the daily confessions in media as to "pent-up" air-travel budgets goes. Ration air travel now ... till it figures out a way to fly clean.