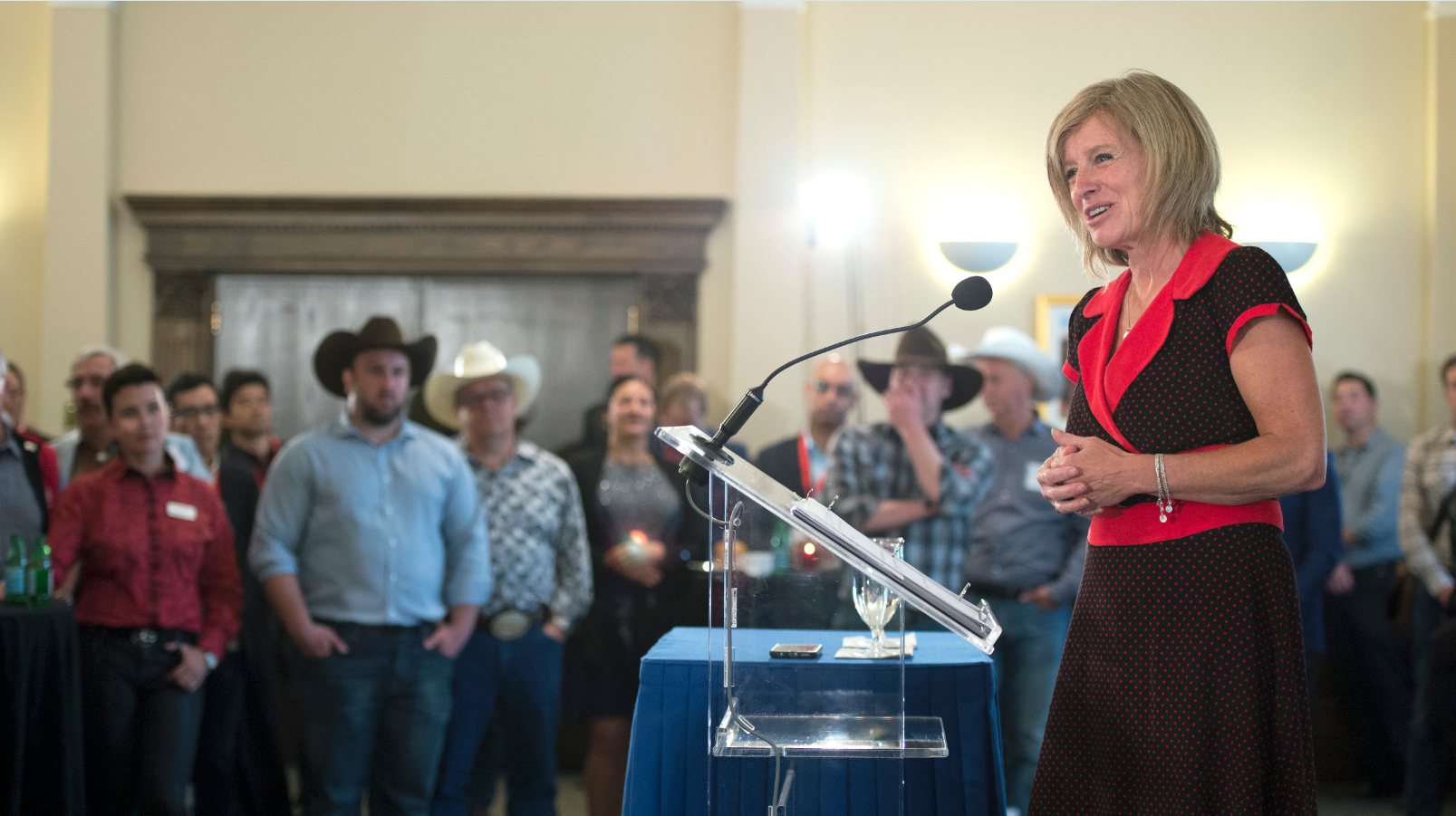 Premier Rachel Notley speaks during the fifth annual Stampede Investment Forum in Calgary on July 11, 2017. Photo provided by The Government of Alberta
Previous story
Next story

Alberta Premier Rachel Notley says the federal government is being unfair in the way it assesses pipeline projects, but her government will not go to court for now to try to make it right.

Notley, speaking after last week's cancellation of the Energy East pipeline, says she will focus on working with Prime Minister Justin Trudeau's government to advance two other projects that already have the green light.

"We're going to look at what the impact of the NEB (National Energy Board) has on (pipeline) projects going forward," Notley said in Calgary on Friday when asked if she was considering a legal challenge on whether the regulator is acting outside its mandate.

"Right now we are working effectively with the federal government on moving forward on the Kinder Morgan approval (and) moving things forward with respect to the Line 3 approval."

Notley's conservative opponents in Alberta have demanded she take a harder line with Ottawa and with pipeline critics. They also want Alberta to challenge in court the regulator's recently expanded mandate — at the behest of the federal government — to examine not only the specific environmental impacts of a pipeline project, but also the downstream effects when that oil is transported and burned for fuel.

Notley suggested that a confrontational approach is childish and ultimately self-defeating.

"Having little temper tantrums where you close your eyes and you clench your fists and you get really red in the face and you yell at (opponents) gets you nowhere," she said.

"What you need to do is address the issues that people are concerned about."

The premier said her approach, which includes a carbon tax and capping oilsands production, led to the approval by Trudeau's government last year of Kinder Morgan's expansion of the Trans Mountain line to the West Coast and Enbridge's (TSX:ENB) Line 3 upgrade to take oil through to the U.S. Midwest.

Alberta has been pushing for years for new and expanded pipelines to get its oil to deep-water ports so it can be shipped overseas and fetch a better price.

The Energy East line, proposed by Calgary-based TransCanada Corp. (TSX:TRP), would have taken oil from Alberta and Saskatchewan to refineries in Montreal and New Brunswick.

It was opposed by Indigenous and environmental groups and by critics in Quebec, including Montreal Mayor Denis Coderre.

Notley said she has no problem with upstream effects, but suggested it's unfair to tack on downstream ones.

"The inclusion of downstream emissions into the consideration is somewhat discriminatory to the energy industry," she said.

"We certainly don't see people including the downstream emission consequences of car parts going onto rail. It doesn't seem to make a lot of sense."

TransCanada has cited the regulatory changes and "changed circumstances" as the reason for its pullout.

The issue is front and centre in the leadership race for Alberta's new United Conservative Party. Contenders are accusing Notley of kowtowing to Ottawa and others seeking to scuttle energy projects.

"The premier should be using every single legal tool available to the province to challenge the federal government and every other jurisdiction on this," Brian Jean, a candidate and former leader of the Wildrose party, said in an interview.

Kenney has demanded Ottawa roll back the energy board's expanded mandate. He calls it a "violation of Alberta's constitutional jurisdiction to regulate its own production."

The third candidate, Doug Schweitzer, wrote on Twitter that Albertans "want us to stand up and fight.

This project had no future

This project had no future economically as there is no foreign markets (except for the U.S.) for the crude oil carried by that pipeline. Canadian oil producers have been able to export Canadian crude oil (if not mixed with U.S. products) using U.S. Gulf Coast port facilities. Exports of Canadian crude oil using U.S. port facilities to foreign countries other than the U.S. slightly want up during the summer of 2014, but as the price of oil went down, the level of foreign exports went back to less than one per cent (0.8%) of Canadian total oil production . The Irving refinery in N.B. was ready to take a small portion of the crude oil carried by Energy East (coming mostly from the Bakken Oil Field ), the rest being exported almost entirely to U.S. refineries. Irving, the largest refinery in Canada, buys its crude from foreign countries like Saudi Arabia which can provide the refinery with low-cost easy to refine light crude. Irving CEO already said that they would continue to buy Saudi Arabia oil even if the pipeline was built. Economics, not environmental concerns, was the reason behind the cancellation of that project.

Wonder what it feels like to totally betray your values and the environment just to stay in power. What’s the point if all you do is support the same destructive policies as your so-called opponents,

Re: "Alberta has been

Re: "Alberta has been pushing for years for new and expanded pipelines to get its oil to deep-water ports so it can be shipped overseas and fetch a better price." I have been keeping track of the crude oil tankers leaving the Kinder Morgan terminal in Burnaby since late February; all nine of them have gone south to the USA, mainly to California. None of them have gone "overseas", which they would have done if a better price were available.

If Notley was serious about exporting bitumen it would already have happened as undiluted bitumen could have been sent by rail to a west-coast port. There is little danger doing this and it is far far safer than sending diluted bitumen by pipeline.