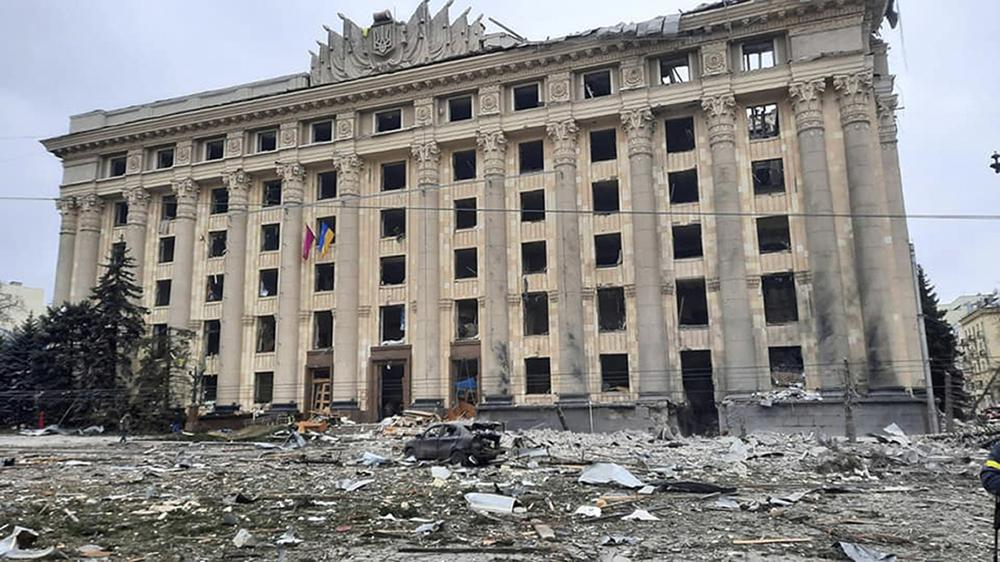 Russian shelling pounded the central square in Ukraine’s second-largest city and other civilian targets Tuesday and a 40-mile convoy of tanks and other vehicles threatened the capital — as Ukraine’s embattled president accused Moscow of resorting to terror tactics to press Europe’s largest ground war in generations.

With the Kremlin increasingly isolated by tough economic sanctions that have tanked the ruble currency, Russian troops advanced on Ukraine’s two biggest cities. In strategic Kharkiv, an eastern city with a population of about 1.5 million, videos posted online showed explosions hitting the region’s Soviet-era administrative building and residential areas. A maternity ward relocated to a shelter amid shelling.

Ukrainian President Volodymyr Zelenskyy called the attack on Kharkiv’s main square “frank, undisguised terror,” blaming a Russian missile and calling it a war crime. “Nobody will forgive. Nobody will forget. ... This is state terrorism of the Russian Federation.”

As the fighting reached beyond military targets on Day 6 of a Russian invasion that has shaken the 21st century world order, reports emerged that Moscow has used cluster bombs on three populated areas. If confirmed, that would mean the war has reached a worrying new level.

The Kremlin denied Tuesday that it has used such munitions and insisted again that its forces only have struck military targets — despite evidence documented by AP reporters of shelling of homes, schools and hospitals.

The Russian defense minister vowed Tuesday to press the offensive until it achieves its goals, after a first round of talks between Ukraine and Russia yielded no stop in the fighting. Both sides agreed to another meeting in coming days.

Throughout the country, many Ukrainian civilians spent another night huddled in shelters, basements or corridors. More than a half-million people have fled the country, and the U.N. human rights office said Tuesday that it has recorded the deaths of 136 civilians, including 13 children. The real toll is likely far higher.

“It is a nightmare, and it seizes you from the inside very strongly. This cannot be explained with words,” said Kharkiv resident Ekaterina Babenko, taking shelter in a basement with neighbors for a fifth straight day. “We have small children, elderly people and frankly speaking it is very frightening.”

A Ukrainian military official said Belarusian troops joined the war Tuesday in the Chernihiv region, without providing details. But Belarusian President Alexander Lukashenko said he had no plans to join the fight.

With Western powers sending weapons to Ukraine and driving a global squeeze of Russia’s economy, President Vladimir Putin’s options diminished as he seeks to redraw the global map — and pull Ukraine’s western-leaning democracy back into Moscow’s orbit.

“We are fighting also to be equal members of Europe,” Zelenskyy said in an address to the European parliament. “I believe that today we are showing everybody that is what we are. ... We have proven that, as a minimum, we are the same as you.”

On Monday, he said Kyiv was not prepared to make concessions “when one side is hitting another with rocket artillery.”

As the talks along the Belarusian border wrapped up, several blasts could be heard in the capital, and Russian troops advanced on the city of nearly 3 million. The convoy of armored vehicles, tanks, artillery and support vehicles was 25 kilometers (17 miles) from the center of the city and stretched about 65 kilometers (40 miles), according to satellite imagery from Maxar Technologies.

“They want to break our nationhood, that’s why the capital is constantly under threat,” Zelenskyy said, saying that it was hit by three missile strikes on Monday and that hundreds of saboteurs were roaming the city.

Kharkiv, near the Russian border, is another key target. One after the other, explosions burst through a residential area of the city in one video verified by AP. In the background, a man pleaded with a woman to leave, and a woman cried.

Determined for life to go on despite the shelling, hospital workers transferred a Kharkiv maternity ward to a bomb shelter. Amid makeshift electrical sockets and mattresses piled up against the walls, pregnant women paced the crowded space, accompanied by the cries of dozens of newborns.

Sinehubov said that at least 11 people were killed and scores of others were wounded during Monday’s shelling of the city.

Russia’s goals in hitting central Kharkiv were not immediately clear. Western officials speculated that it is trying to pull in Ukrainian forces to defend Kharkiv while a larger Russian force encircles Kyiv. They believe Putin’s overall goal is to overthrow the Ukrainian government and install a friendly one.

In a worrying development, Human Rights Watch has said it documented a cluster bomb attack outside a hospital in Ukraine’s east in recent days. Local residents have also reported the use of the munitions in Kharkiv and the village of Kiyanka near the northern city of Chernihiv, though there was no independent confirmation.

The International Criminal Court chief prosecutor has said he plans to open a Ukraine investigation and is monitoring the conflict.

Meanwhile, flames shot up from a military base northeast of Kyiv, in the suburb of Brovary, in footage shot from a car driving past. In another video verified by AP, a passenger pleads with the driver, “Misha, we need to drive quickly as they’ll strike again.”

And Ukrainian authorities released details and photos of an attack Sunday on a military base in Okhtyrka, a city between Kharkiv and Kyiv, saying more than 70 Ukrainian soldiers were killed along with some local residents. The attack could not be immediately confirmed.

The Russian military’s movements have been stalled by fierce resistance on the ground and a surprising inability to dominate Ukraine’s airspace.

In the face of that Ukrainian resistance and crippling Western sanctions, Putin has put Russia’s nuclear forces on high alert — including intercontinental ballistic missiles and long-range bombers — in a stark warning to the West and a signal of his readiness to escalate the tensions to a terrifying new level. But a senior U.S. defense official, speaking on condition of anonymity, said the United States had yet to see any appreciable change in Russia’s nuclear posture.

Western nations have increased weapons shipments to Ukraine to help its forces defend themselves — but have so far ruled out sending in troops.

Messages aimed at the advancing Russian soldiers popped up on billboards, bus stops and electronic traffic signs across the capital. Some used profanity to encourage Russians to leave. Others appealed to their humanity.

Fighting raged in other towns and cities. The strategic port city of Mariupol, on the Sea of Azov, is “hanging on,” said Zelenskyy adviser Oleksiy Arestovich. An oil depot was reported bombed in the eastern city of Sumy.

In the seaside resort town of Berdyansk, dozens of protesters chanted angrily in the main square against Russian occupiers, yelling at them to go home and singing the Ukrainian national anthem. They described the soldiers as exhausted young conscripts.

“Frightened kids, frightened looks. They want to eat,” Konstantin Maloletka, who runs a small shop, said by telephone. He said the soldiers went into a supermarket and grabbed canned meat, vodka and cigarettes.

“They ate right in the store,” he said. “It looked like they haven’t been fed in recent days.”

As far-reaching Western sanctions on Russian banks and other institutions took hold, the ruble plummeted, and Russia’s Central Bank scrambled to shore it up, as did Putin, signing a decree restricting foreign currency.

But that did little to calm Russian fears. In Moscow, people lined up to withdraw cash as the sanctions threatened to drive up prices and reduce the standard of living for millions of ordinary Russians.

The economic sanctions, ordered by the U.S. and other allies, were just one contributor to Russia’s growing status as a pariah country.

Russian airliners are banned from European airspace, Russian media is restricted in some countries, and some high-tech products can no longer be exported to the country. International sports bodies moved to exclude Russian athletes — in the latest blow Tuesday, Russians were barred from international ice skating events.

Isachenkov and Litvinova reported from Moscow. Robert Burns and Eric Tucker in Washington; Francesca Ebel, Josef Federman and Andrew Drake in Kyiv; Lorne Cook in Brussels; and other AP journalists from around the world contributed to this report.

Heartbreaking. I have roots

Heartbreaking. I have roots in southern Ukraine, and this situation is distressing.