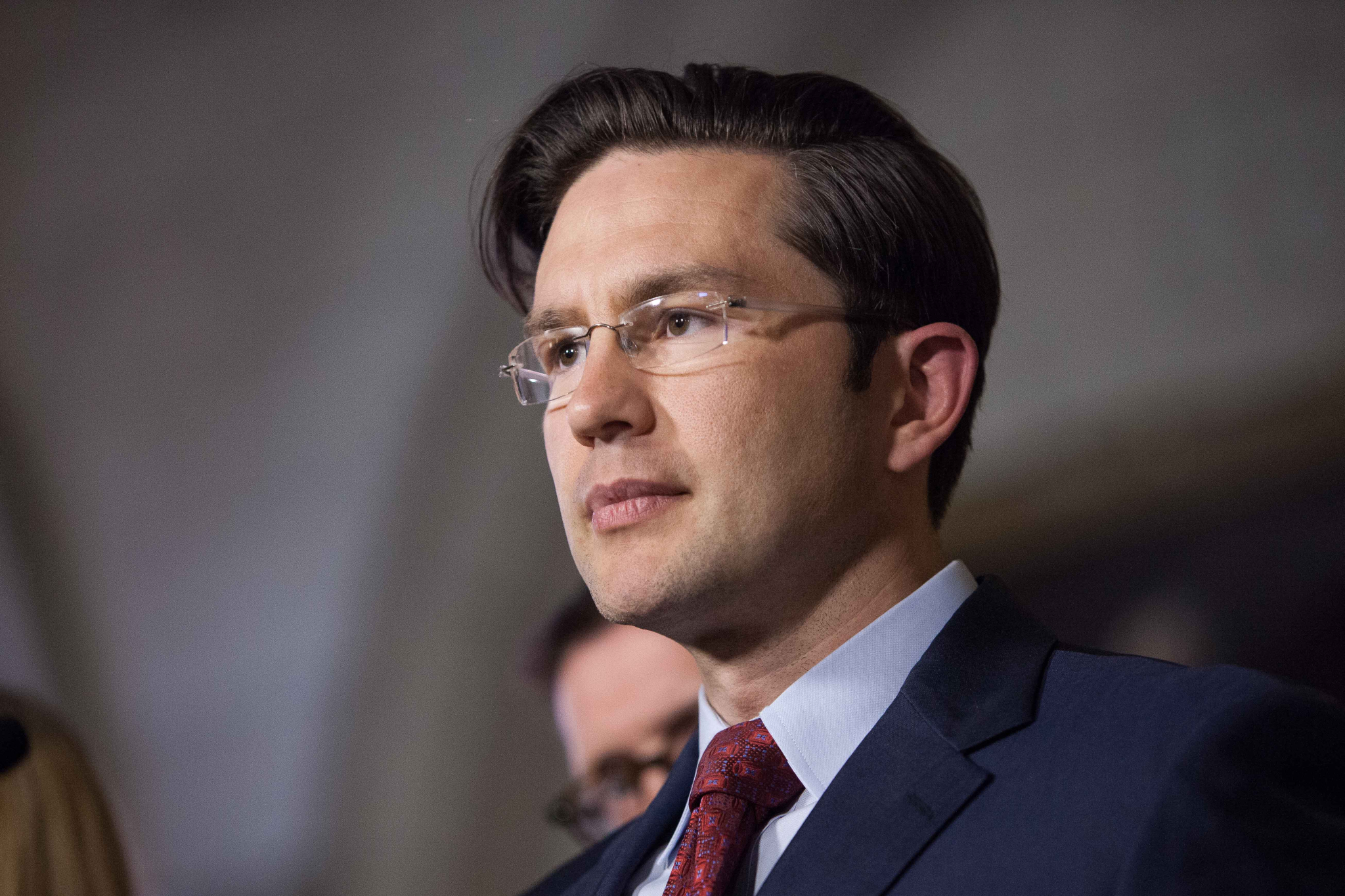 Canada may not be ready for “Poilievremania” just yet, but the massive crowds showing up to his rallies are a clear sign the Conservative Party of Canada is embracing him with a similar degree of enthusiasm. File photo by Alex Tétreault
Previous story

As a lifelong Conservative and son of Alberta who was born in Calgary just as the National Energy Program was being created, there are probably few politicians Pierre Poilievre dislikes more than Pierre Trudeau. It’s ironic, then, that he appears to be following a similar path as the former Liberal prime minister.

In the early months of 1968, the phenomenon that would later be known as “Trudeaumania” swept across Canada’s political landscape with a force and fury that few thought possible at the time. Now, more than 50 years later, Poilievre is threatening to pull off a similar feat.

Canada may not be ready for “Poilievremania” just yet, but the massive crowds showing up to his rallies are a clear sign the Conservative Party of Canada is embracing him with a similar degree of enthusiasm.

The parallels don’t stop there, either. Poilievre’s energy policy, which revolves around ideas like banning oil imports from countries like Russia and building new pipelines to the east (all under the banner of patriotic Canadian energy), is a thinly veiled repackaging of Trudeau’s National Energy Program. His obsession with freedom, meanwhile, is an echo of Trudeau’s long-standing effort to promote and protect individual rights, one that concluded with the creation of the Charter of Rights and Freedoms.

But while Pierre Trudeau’s appeal to Liberals was due in part to his command and understanding of complex issues, the love affair Conservatives are having with Poilievre seems informed by his willingness to reduce complexities down to their most basic element.

And where Trudeau saw the pursuit of greater rights and freedoms as part of a broader nation-building project, one that would protect citizens from any infringements on their civil liberties by other levels of government, Poilievre seems to see them as a shield protecting people from any sense of shared social responsibility.

It’s why Poilievre has stood up for the rights of an anti-democracy convoy instead of our elected government. It’s why he’s spoken on behalf of those who won’t wear masks or get vaccinated rather than the millions of people who have. His uncompromising notion of liberty is a distinctly American one, and it ignores the reality that our Constitution — indeed, Section 1 of the charter — says certain rights can be limited to protect the rights of others.

Time and again, he has said he wants to “make Canada the world’s freest country.” But what does that actually mean?

According to Freedom House, an American organization founded in 1941 and dedicated to the promotion of democracy, freedom and the rule of law, Canada is already one of the freest countries on Earth. It ranks fifth on the organization’s ranking of the world’s freest countries with a score of 98, behind only Norway, Finland, Sweden and New Zealand, and well ahead of places like the United Kingdom (93) and the United States (83).

What Poilievre seems to mean is that Canada isn’t free enough for the anti-maskers, anti-vaxxers and the rest of the petulant pandemic protesters who gathered in Ottawa in January. But their freedoms don’t automatically supersede those of the millions of Canadians who have tried to look out for their fellow citizens, and their refusal to follow the rules doesn’t make Canada a less free country. It’s the existence of rules, in many respects, that undergirds our most important freedoms of all.

Opinion: Canada may not be ready for “Poilievremania” just yet, but the massive crowds showing up to his rallies are a clear sign the Conservative Party of Canada is embracing him with a similar degree of enthusiasm, writes columnist @maxfawcett.

The parts of the world that have embraced Poilievre’s version of freedom haven’t exactly thrived in recent years, either. Whether it’s Florida or North Dakota, the libertarian ideology Poilievre ascribes to has been a death sentence for many thousands of people in places where the rights of vaccine skeptics and anti-maskers have been prioritized above the health of the broader public. According to Pew Research, death rates in the most pro-Trump counties in America were four times higher than those in the most pro-Biden ones during the fourth wave of the pandemic.

It’s unlikely anyone in the Conservative Party of Canada can stop Poilievre at this point. But if Justin Trudeau’s Liberals want to prevent him from winning the election in 2025, they need to do a better job of pushing back against the freedom-oriented narrative he’s building.

Canada is already a free country, one of the freest in the world, and those freedoms are guaranteed by a document Pierre Trudeau gave us nearly 40 years ago.

If they want to prevent Poilievre from following in Trudeau’s footsteps, they need to start talking more about what freedom really means in Canada — and why his version doesn’t belong here.

Very insightful article.
Totally distilled the essence of what is going on with this moment's Conservative darling.
Frankly, I never had a good feeling about P.P. and seeing and hearing more of him during the multiple convoy crises only confirmed my gut instinct. He wears the same clothes as any typical Republican hardliner politician south of the border. Bet Trump would endorse him.

Brylcream and halitosis isn't even the most unwholesome things about him.

Fawcett asks a very good question in what do these people mean by "freedom"? It seems that their dream goal is ultimate selfishness. I thought it was interesting that the only time Trump got push-back from his followers was when he urged them to get vaccinated. That's the first time he had put any limits on anything and they didn't like it. It's a very juvenile, if not childish, mentality.

Thank you for this article and I agree with the comments so far. I didn't know that Canada ranked as the fifth most free country in the world. We should be extremely grateful for that! I think we need to have a conversation in Canada about what it means to be free and the rights and limits to freedom under the Charter. The word "freedom" has been totally perverted by some of the protesters associated with the Convoy, and Poilievre seems to be using this sentiment to his political advantage. Shame on him! And remember, the organizers of the Ottawa Occupation wanted to overthrow the government if their demands weren't met.

Yes, the behaviour by some of the Convoy protesters has been selfish and immature regarding the topic of freedom. This is worrisome. The freedoms we enjoy and democracy itself are in a tenuous position today. We can easily lose them. Ask any Ukrainian person.

Let's call him "Boilievre." He's a master at stirring anger, which means he'll probably win, and bring it on I say. At least there's honesty in putting forward, in all its nastiness, what the conservative party now IS, no more pretending to be reasonable people with the bland likes of Erin O'Toole and Andrew Scheer. FREEDUMB! The best solution for the right wing seems to be giving them enough rope to hang themselves....
Max sums it up with "while Pierre Trudeau's appeal to Liberals was due in part to his command and understanding of complex issues, the love affair Conservatives are having with Poilievre seems informed by his willingness to reduce complexities down to their most basic element." That's what conservatives do best, nuance be damed. Another way of saying that is that they just aren't all that bright....

Unfortunately, it all goes to

Unfortunately, it all goes to worse than inability to parse complexity: it's inability to speak truth as well.
Don't forget that enough rope to hang themselves is also enough rope for them to hang many others ... and that's the problem.

Peter Poilievre (PP) has been

Peter Poilievre (PP) has been the Conservative Party's Demagogue-in-Chief for a number of years. He is a classic populist, who tells his audience what they want to hear, regardless of whether it is the truth. (He doesn't let the truth get in the way of a good story!) I remember when Mr. Trudeau had ha SNC Lavalin scandal, PP stated publicly that the PM only wanted to invoke the Deferred Prosecution Agreement (DPA) to protect his rich cronies at SNC, which was not true but was a good, simple explanation. In fact, the DPA concept is very complex, but is rational and difficult to defend to an uninformed audience. It is the kind of issue that a populist loves to exploit. There are many other examples of PP's use of demagoguery during his career.
Demagogues like to use slogans to make people think they are following a noble path. His objective to make Canada "the freest country in the world" is really quite meaningless, and it is unlikely that he would be any more successful in achieving it that was Donald Trump in "making America great again)".
"Freedom" is a greatly overused buzzword, with many different, and sometimes contradictory meanings. Its faulty usage can justify any action the populist wants. I think that, before the next federal election, every political party should clearly present, in terms that are unambiguous, exactly what brand of "freedom" they are prepared to support and enforce.
History shows that demagogues get elected because of what they are but afterwards, when a national emergency occurs, their simplistic arguments don't work and they fail, often in spectacular fashion. Let's hope that doesn't happen here in Canada!

There is nothing complicated

There is nothing complicated about a Deferred Prosecution Agreement (DPA). It is a clever way for corporate executives to own up to wrong doing when the government comes after them. Instead of taking responsibility and doing time, the DPA let's their companies take the fall and pay the penalties - the C-suite skips out of any personal moral or ethical responsibility for the way their company personnel conducted business. Subsequent trials and convictions have established that in the case of SNC Lavalin, a DPA was totally undeserved.

The PP rally I seen on the TV

The PP rally I seen on the TV t’other night looked like a real friendly crowd—they was clappin’ before he got onto his box.

His first topic was all about how he was all good with multiculturalism cuz his own forebears was french. It says sumpin’ that it was his lead-off pitch. Kinda like he worried about somebody might to call him out on that matter.

Didn’t look like any a them busy, grey beards n mackinaw n toques woulda done anything like that...

Just sayin’, is all.

Sadly, Alberta will blindly embrace PP without a question or a critical eye.
Great article!

They didn't sacrifice everything so that I could dance on their graves and sacrifice
nothing.

MAY WE LIVE AS NOBLY AS THEY DIED.

That's the inscription on a granite bench facing the war monument in Calgary's Central Memorial Park, where 'freedom protestors' gathered to make a nuisance of themselves.

What better way to tarnish the memory and the legacy of our war dead while debasing the meaning of their sacrifice.