Carbon trading: A tool for reconciliation or colonization? 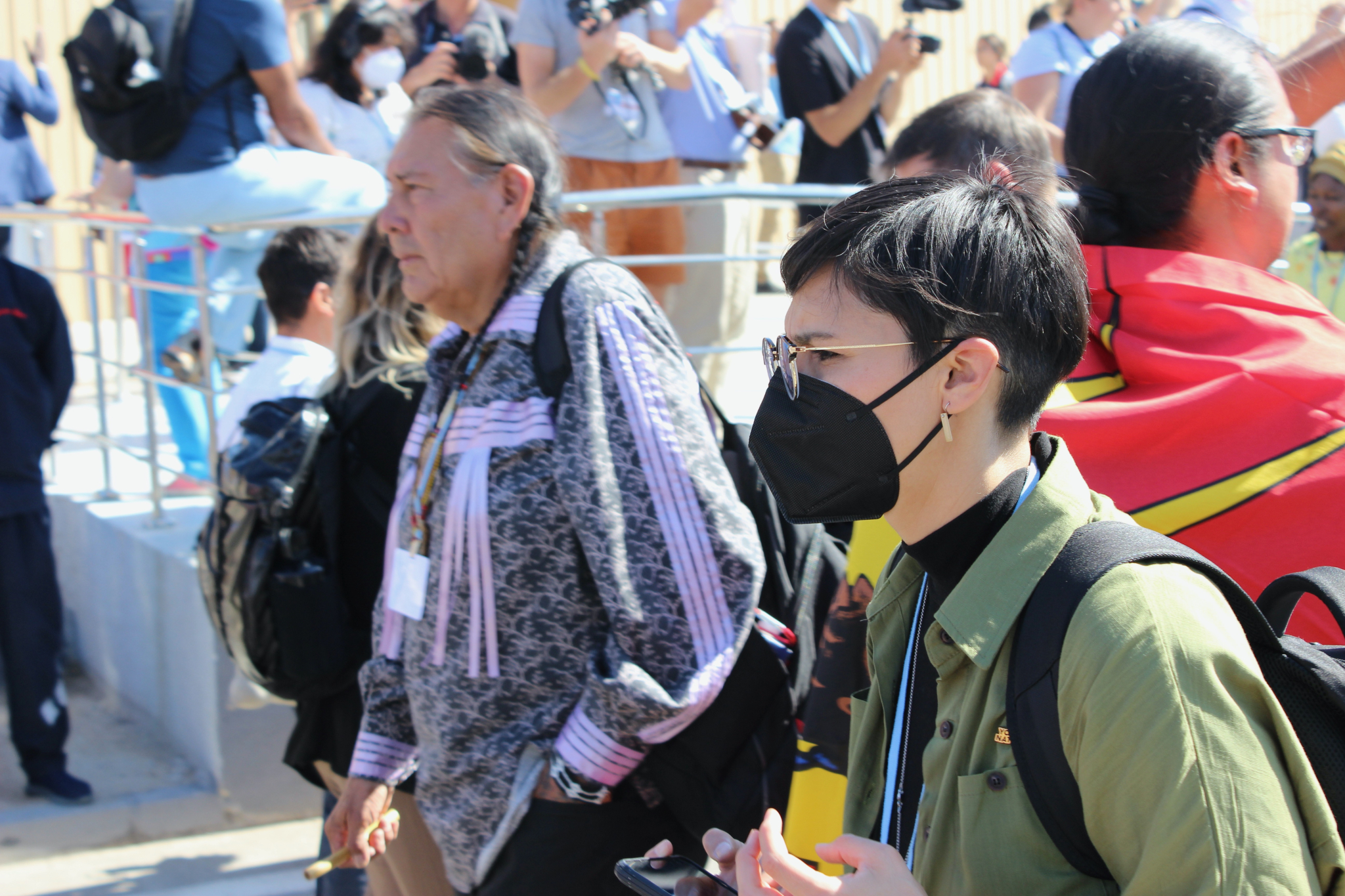 Eriel Tchekwie Deranger’s home community of Athabasca Chipewyan First Nation is in what she calls a “sacrifice zone.” The nation borders the oil production epicentre of Canada: the oilsands, which leak toxic chemicals and wreak havoc on local ecosystems.

The same is true for many nations within Treaty 8 territory, which covers northern Alberta. For those nations, which have suffered over a century of colonial dispossession of land, children and systemic hardship, there was almost no choice but to strike agreements with the oil and gas sector, including small minority-stake ownership in pipelines.

Deranger’s community was one of those nations. They needed a school and other infrastructure improvements, and the environmental movement was not stepping up to provide it, Deranger, executive director of Indigenous Climate Action, said.

Last week, delegates from around the world continued to negotiate details of a global carbon trading system at the United Nations climate conference in Egypt. While that system is not yet up and running, Deranger worries it will turn into a greener-sounding likeness of the extractive oil and gas industry.

As the world barrels towards a cleaner economy, companies, countries and organizations are trying to cancel out the pollution they can’t immediately end by purchasing carbon credits. These credits don’t cut planet-warming greenhouse gas emissions but, in theory, “offset” some of the pollution by neutralizing emissions elsewhere. “Offsets,” as the purchases are called, allow corporations or individuals to balance their carbon budgets. In practice, these credits are sold under a patchwork of regulatory systems and may not always lead to actual benefits. The new global market aims to solve that problem among nation states, but critics fear a poorly designed system could lead to bad credits and double-counting.

It’s an enticing opportunity for corporations looking to mitigate the rising cost of carbon-pricing programs and cap-and-trade systems — allowing polluters to keep polluting, so long as they can pay for the offsets.

Some First Nations have embraced carbon markets as a way to generate income and preserve their ancestral territories. The Coastal First Nations, an alliance of nine nations whose territory includes the Great Bear Rainforest, sells credits each year.

The current price for a carbon credit is around $30 per tonne from the B.C.-based Great Bear Rainforest, according to David Oxley, business corporation manager with the Great Bear Initiative, which sells carbon credits for the Coastal First Nations. Meanwhile, the federal government’s carbon pricing program charges $50 per tonne. In other countries, carbon pricing is even higher and will continue to rise through the decades.

And as the global carbon trading system overseen by the UN gets underway, the value of offsets is set to explode. The International Institute for Sustainable Development predicts carbon markets will hit $1 trillion by 2050.

There is worry the carbon market boom will further worsen the situation of Indigenous nations near “sacrifice zones” by effectively lengthening the life of the fossil fuel industry, whose products are the main driver of climate change. Carbon markets are a “false solution,” Deranger says, arguing they breathe new life into an industry that needs to be culled.

Carbon markets imply the existence of "sacrifice zones," where some First Nations will remain on the front lines of fossil fuel extraction, with others benefiting from the conservation needed to offset that extraction. #CarbonOffsets #ClimateChange

Deranger considers the carbon market a red herring because undeveloped lands already store carbon, which amounts to these organizations playing an “accounting game” with their emissions, Deranger explained.

The numbers game reduces the climate emergency to what Deranger calls “carbon essentialism,” or an over-focus on carbon numbers rather than human rights and social justice.

But Steven Nitah, the director for Nature for Justice Canada — a non-profit that entwines social justice, environmentalism and climate or carbon-based solutions — believes the free market economy isn’t going anywhere any time soon.

He believes First Nations can step into a larger role as credible offset project developers.

“One of the principles in a free market economy is to invest in what works,” he said.

Indigenous Peoples have proven to be the best caretakers of nature and have the healthiest land that often encompasses carbon sinks. The free market should then invest in Indigenous rights, leadership, knowledge and value systems. “It's a package,” he explained.

However, Nitah acknowledges the biggest obstacle facing the carbon market is the integrity of the products, which has wobbled without strong regulation.

With no strong regulatory standard for governing a global market, there is another familiar worry: bad-faith industry types seeking to exploit land and Indigenous nations to control the new trading market. It’s already happening in the Global South, where some nations have been told not to harvest medicines and food to protect carbon stores, echoing the same paternalism that has been a marker of colonialism for decades, Deranger said.

“They were offering millions, but in the long run, it’s almost insignificant,” Oxley said.

The Coastal First Nations developed its project from the ground up, setting the nations up for a decades-long benefit. The Great Bear Rainforest made $8 million last year alone from selling offsets, Oxley said.

Similar to extractive industries that force agreements on communities, some nations will have no choice but to play the game pitched by market players. Indigenous nations will either have to develop offsets or leave their territories open to resource extraction. For example, without the carbon offset program set up in the Great Bear Rainforest, Oxley believes there would be less protection and more logging in the Coastal First Nations’ territories.

Capitalism has rarely, if at all, given Indigenous nations fair deals and autonomy regarding their ancestral territories, Deranger says. Instead, she explains, the colonial paternalism that remains within carbon markets tells Indigenous people: “You should be happy we’re giving you anything at all.”

Instead of developing carbon markets, there should be a focus on Indigenous rights, land-based rights and a lens that doesn’t reduce the land and Indigenous Peoples to profit margins and spreadsheets, which leave some nations as sacrifices and others as stewards, Deranger argued.

“We need to be addressing root causes like colonialism, capitalism, patriarchy, white supremacy and racial injustices, and we can’t be doing that if we’re looking at this crisis through a market-based lens,” she said.

— With Files from Rochelle Baker

Remind me not to trust

Remind me not to trust "Nature for Justice Canada". Any time you see a so-called environmentalist talking about free markets, they're either dirty or at best a useful idiot.