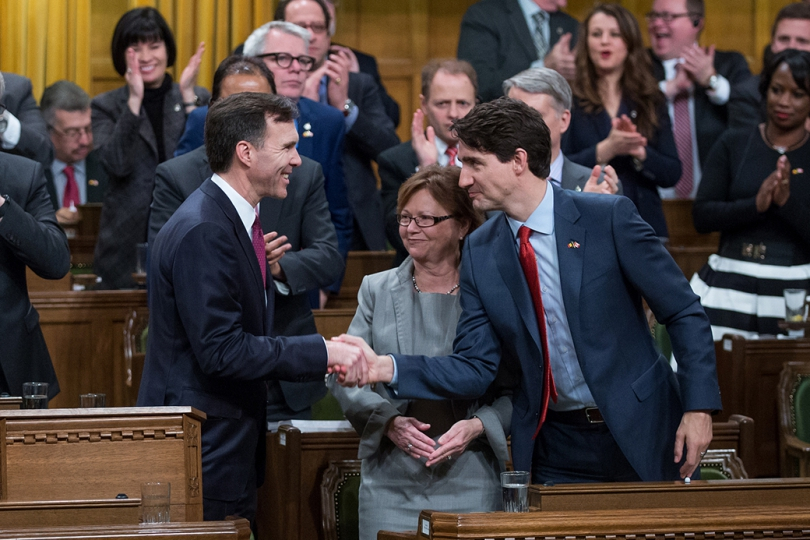 Finance Minister Bill Morneau and Justin Trudeau in the House of Commons. Photo from PMO
Previous story
Next story

Prime Minister Justin Trudeau's government was criticized from all sides on Tuesday in response to a published news report that alleged he had instructed key officials to prepare a strategy to approve major new pipeline projects.

While opposition Conservative MPs criticized Trudeau in the House of Commons for not doing more to cheerlead for the oil and gas industry, a leading climate change scientist and several environmental groups reacted to the news with disbelief.

“If you build a pipeline, you’re going to fill it with tar sands that’s going to increase our emissions and that’s not going to allow us to meet our climate change commitments," said Stone, in an interview with National Observer.

He said it was impossible to burn the fossil fuel reserves currently available and meet the government's objective of limiting global warming to 1.5 degrees Celsius above pre-industrial levels.

Canadian industry advocates have said that new pipelines are now more important than ever to help them reach new markets and compete with other producers from around the world. They say the needs are particularly pressing for Alberta's oilsands producers, which face higher costs to extract oil compared to most of their competitors.

The industry has been hammered in recent months and some tens of thousands of workers have lost jobs in Alberta since the fall of 2014 when global oil prices began to plummet. The bad economic news continued on Tuesday with Calgary-based Cenovus, a major oilsands producer, announcing that it was eliminating 250 jobs as it completed a wave of layoffs.

But environmental groups, who have warned about the consequences of rising heat-trapping carbon pollution from the industry, say new pipelines - such as Kinder Morgan's Trans Mountain expansion project to British Columbia and TransCanada Corp's cross-country Energy East project - are not the solution.

“I think ultimately the thing I can’t get my head around is why they think these pipelines make any economic sense,” said Adam Scott, climate and energy program manager for Environmental Defence.

“If you look right now, there's very little economic case for the construction of these projects.”

In the Commons, Conservative MPs attacked Trudeau for not doing more to promote more oil and gas expansion. Trudeau said his government was building for the future by combining both the environment and the economy, while basing decisions on evidence.

"For 10 years, the previous government did everything it could to try and shout those pipelines into being," Trudeau said, in response to a question from Conservative leader Rona Ambrose. "What that resulted in was delivering no pipelines to tidewater. One of the fundamental responsibilities of any prime minister is to get our resources to market. However, in the 21st century, getting those resources to market means doing it responsibly for communities, for indigenous peoples and for the environment."

Conservative natural resources critic Candice Bergen later suggested that some of Trudeau's advisors should not be trusted since they have publicly taken strong positions that show they care about the environment.

"The people in Alberta are looking for a government that will proudly stand up for Canadian oil and gas, not act coy and shy when it becomes convenient for it," Bergen said in the Commons.

Natural Resources Minister Jim Carr responded by stressing the importance of improving market access for producers and slamming the federal Conservatives for suggesting that projects should be approved without a federal review.

"The prime minister has said there is no contradiction between building wind turbines and pipelines," Carr said. "He has said it is a principal responsibility of the government of Canada to move our natural resources to market sustainably. That is why we are following a process that will consult with Canadians and give people the chance to understand that in this day and age we develop the economy sustainably with one eye on the environment and the other on job creation. That is the way we will move forward sustainably."

These parliamentary exchanges followed a column published by the National Post on Monday that reported the prime minister has ordered staff to draw up plans to push the pipelines through.

Finance minister Bill Morneau and others in cabinet convinced Trudeau that the pipelines must be built to achieve the government’s ambitious economic growth targets, John Ivison reported in the National Post.

Following a morning federal cabinet meeting, Environment and Climate Change Minister Catherine McKenna dismissed the National Post report, without explicitly denying it. She noted that the government had already announced new measures to improve the review process for pipeline projects, including efforts to improve consultations with all affected communities and First Nations peoples and a review all evidence.

“For the projects that are already under review, we have a process - a process where we will make decisions based on the facts and evidence. This includes pipelines," she told reporters. "So I don’t know where this (National Post) story came from, but it’s not what our process is.”

McKenna said the government won’t prejudge any project. It understands that resources need to get to market, she said, but recognizes that this will only happen if it's done in a sustainable manner.

“I don’t get the feeling that we have to do this fast. We have to do this with a process that respects science and evidence. And we must take the time to evaluate each project and that’s what we’ll do.”

Last week, Alberta Premier Rachel Notley told the province in a televised plea for approval of Energy East that every Canadian benefits from a strong energy sector.

"But we can’t continue to support Canada’s economy unless Canada supports us. That means one thing: building a modern and carefully regulated pipeline to tidewater," Notley said.

She also stressed that her government had introduced a comprehensive climate change plan that would introduce an economy-wide carbon tax, shut down the province's coal power plants, and set a limit on the annual carbon pollution allowed from oilsands producers - Canada's fastest growing source of greenhouse gas emissions.

"We now have a balanced framework to develop our industry, and every government in Canada understands this issue must be dealt with. We must get to ’yes’ on a pipeline."

Scott said it’s unlikely either British Columbia or Quebec would support pipeline development and the federal government would face a challenge to win their support.

“I don’t know how they’re going to get either of those governments onside when there’s overwhelming opposition to both projects in those provinces.”

From Quebec, Steven Guilbeault, co-founder of the environmental group, Equiterre, wrote on his Facebook page: “If the contents of this article are true, the Trudeau government will find an awful lot of people on his trail, and I will be one of those.”

The Quebec group, along with Toronto-based Environmental Defence and the Alberta-based Pembina Institute are co-hosting a reception, Thursday night on Parliament Hill, with McKenna, the federal environment minister.

The purpose of the reception is to “celebrate a new era of climate change in Canada” as well as a new alliance between the three environmental groups.

Graham Saul, executive director of Ecology Ottawa said that if the allegations in the National Post column are accurate, it would “fundamentally undermine” the “sincerity of the Trudeau administration when it comes to climate change and environmental integrity.”

Saul’s non-profit group - a group opposed to TransCanada's Energy East pipeline - sent out letters to all local Ottawa-area Liberal MPs on Tuesday, including McKenna, who represents the Ottawa Centre riding.

The letter asked the Liberal MPs to publicly deny the allegations in the National Post column to reassure Canadians that the government hadn’t already made up its mind to approve new pipelines.

“If true, this initiative brings into question the sincerity of the federal government’s statements regarding its intention to apply a meaningful climate test to fossil fuel expansion, and to ensure that the environment is adequately taken into consideration,” Saul’s letter read.

Trudeau's government has pledged to help Canada move toward a low-carbon economy. He has also said that the country must make strategic investments in clean growth and new infrastructure, while continuing to “generate wealth from our abundant natural resources to fund this transition to a low-carbon economy.”

As well, Trudeau gave Carr a mandate letter last November with instructions that noted that the federal government had a "core responsibility" to help get Canadian resources to market.

"But that is only possible if we achieve the required public trust by addressing environmental, Indigenous Peoples’, and local concerns," Trudeau told Carr in the mandate letter.

Melina Laboucan-Massimo, Climate and Energy campaigner with Greenpeace Canada, said if Trudeau wants to be a climate leader, he can’t approve more pipelines.

“I think Trudeau has a big job ahead of him if he actually wants to act on what he’s saying, and what he has said, and what he was actually elected upon.”