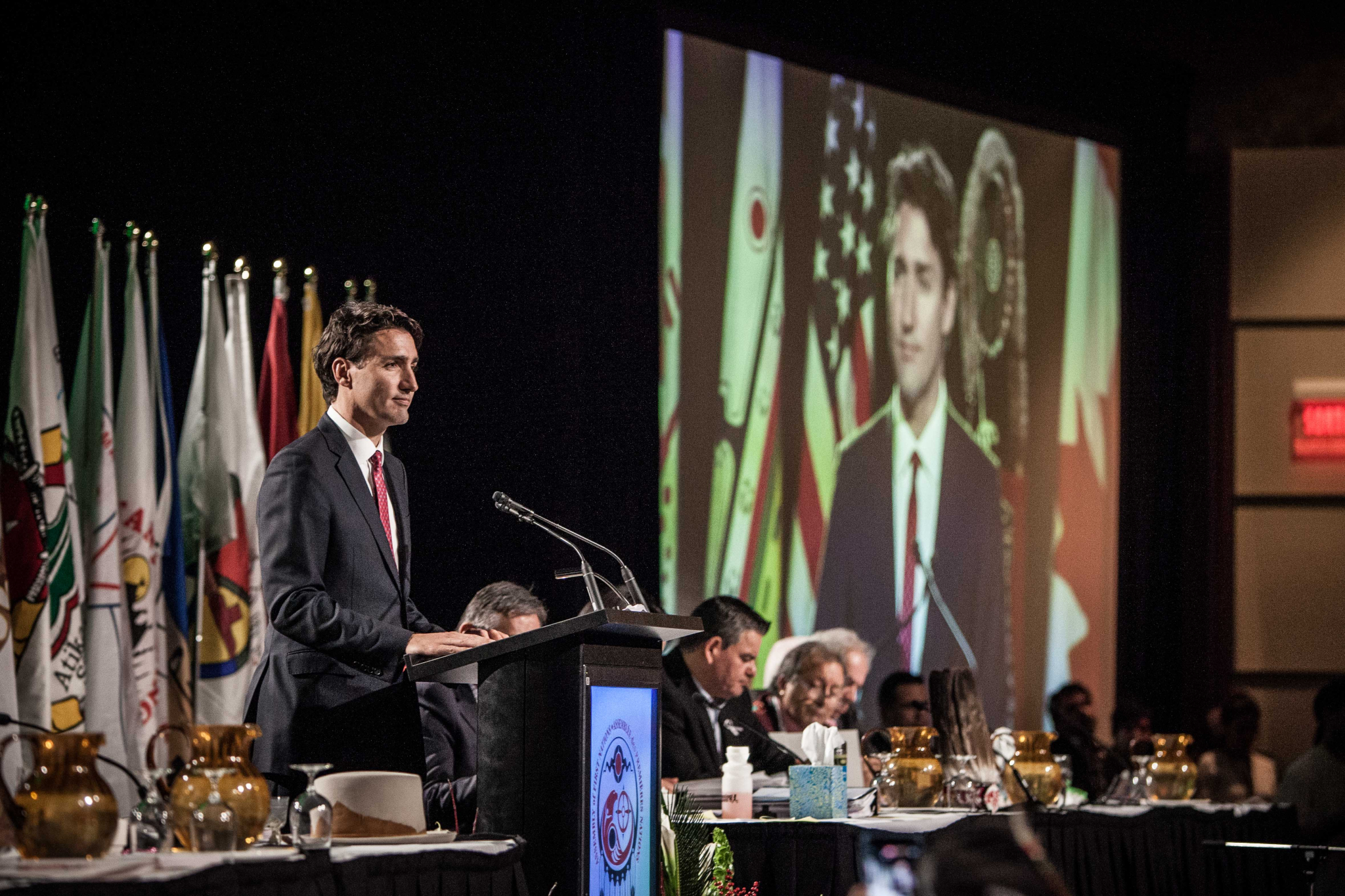 Prime Minister Justin Trudeau speaks to a Special Chiefs Assembly hosted by the Assembly of First Nations in Gatineau, Que. on Dec. 6, 2016. Photo by Alex Tétreault
Previous story
Next story

The resurgent popularity of nationalist movements with extreme anti-migration views in Europe and North America is dangerous for many reasons, not least in the context of climate change.

Scientists last month noted that we are on track for 3ºC of warming even if countries meet the emissions reduction targets pledged under the Paris Agreement. (One scientific group recently estimated that we could reach a 5.9ºC average increase by the end of the century). By contrast, if we want to achieve the Paris Agreement’s goal to limit warming “well below” 2ºC, countries need to keep raising the ambition of their targets.

The security risks that come with warming beyond the 2ºC are becoming clearer based not on models but events, from damage to infrastructure and agriculture, to climate change’s role as a ‘threat multiplier’ whose new stresses can exacerbate existing geopolitical conflicts.

As xenophobic movements grow bolder in brandishing anti-migration rhetoric, it is vital to counter these groups’ narratives by pushing the case for foreign aid that will protect hard-won international progress on climate change.

But critics have called to cancel this foreign aid. A question typical of this opposition is, “Why are we sending money to other countries when we could spend it on X, Y or Z in at home?” It is an understandable question, for which those of us advocating international cooperation on climate action should have compelling answers.

First, there is also strong element of self-interest and pragmatism in providing foreign aid for climate action. The costs to Canada and other rich countries will be astronomical if the international community fails to limit global warming by lowering emissions, as droughts, floods and extreme weather become more frequent and more intense. Though no single storm or drought can be attributed directly to climate change, the multi-billion-dollar cost of the 2013 floods or 2016 wildfires in Alberta are an indication of the high price tag for a more variable climate.

Second, there is a strong moral argument for international climate finance. Wealthy, industrialized countries with high emissions have caused the climate crisis, and supporting cash-strapped countries to keep their emissions low and become climate-resilient is simply the right thing to do.

And before we indulge in self-congratulation, it’s important to note that Canada is hitting well below our weight on foreign aid. In 1970, the United Nations members set a benchmark that rich countries would aim to contribute 0.7 percent of their gross national income as foreign aid. In 2014, five countries (Norway, Luxembourg, Denmark, Norway, United Kingdom) met or exceeded that target while Canada contributed 0.24 percent of our gross national income. Canada has never hit the 0.7 benchmark. There is room to do better.

Finally, and most importantly, Canada’s climate finance commitment doesn’t exist in a vacuum. Our C$2.65 billion contribution is part of a larger US$100 billion that countries have agreed to raise by 2020 to support climate action in developing countries. Alongside this public investment, the private sector is also investing heavily in climate action—Bloomberg estimated that global clean energy investment totalled US$349 billion in 2015—and the Canadian financial sector should take full advantage of such opportunities.

The world will know soon enough if the U.S. withdraws entirely from the international climate agenda, including climate finance. Nonetheless, at this moment of uncertainty for international cooperation, it is a critical time for Canada to continue championing international climate action as part of a much-needed antidote to toxic nationalism and the climate change denial that so often goes with it.

Cut climate change funding for developing countries, use it in Canada: Wall

By Jennifer Graham | News, Energy, Politics | October 18th 2016
Reports from the Race to a Safer World