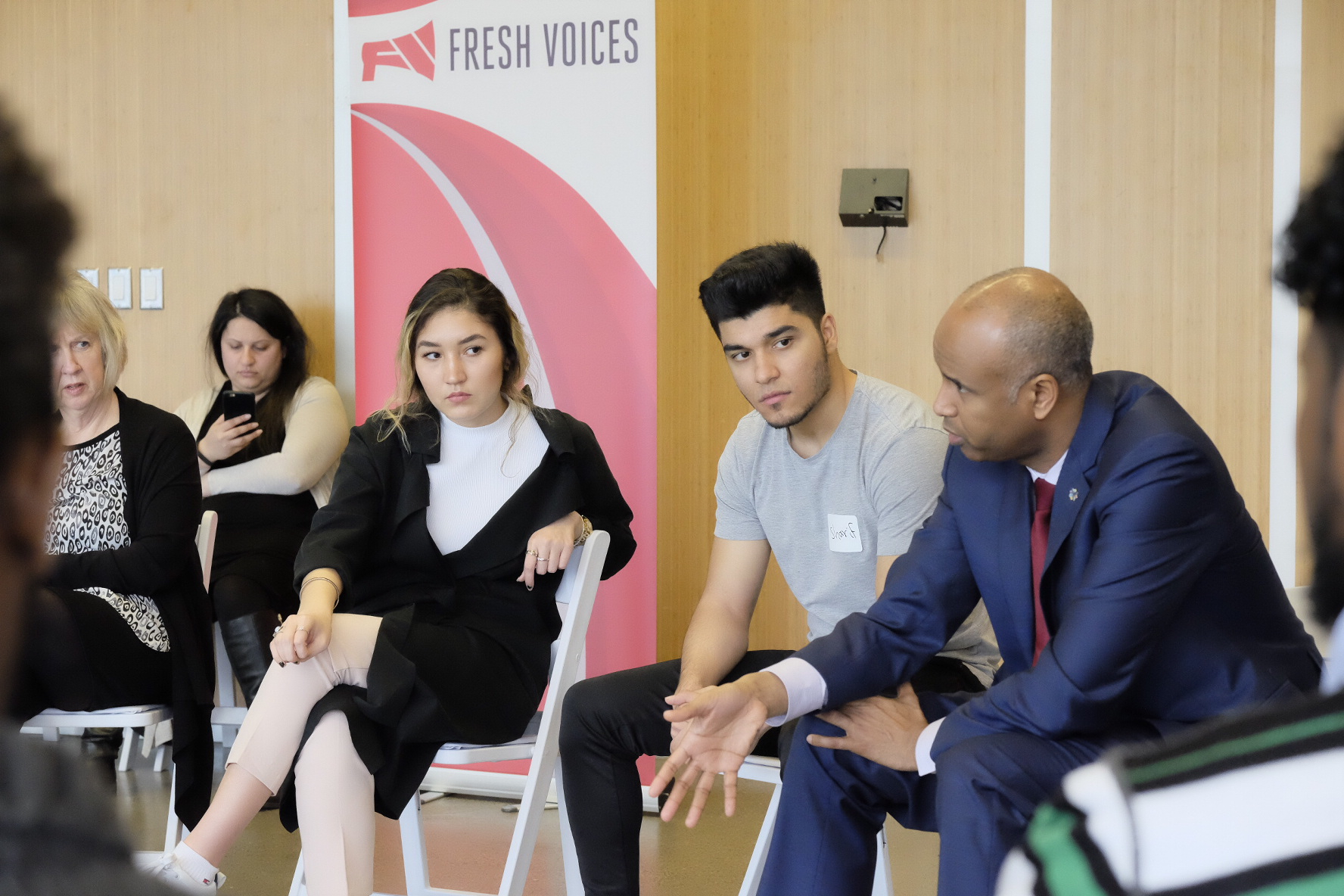 Despite the challenges faced by refugees and new immigrants, which include language barriers and family separation, Immigration Minister Ahmed Hussen feels optimistic that young newcomers will find a way to become thriving members of Canadian society.

"I always emphasize that all newcomers, including refugees eventually succeed and integrate into Canadian society and enrich our lives," he told National Observer. "A lot of the refugees that we help, within a few years, will turn around and contribute to society and become leaders themselves."

Minister Hussen came to Vancouver Friday to meet for a 40 minute private discussion with young people from Fresh Voices, a program launched by the charitable Vancouver Foundation and B.C. Representative for Children and Youth to help young immigrants and refugees. Those gathered in the room were from countries including Iran, Syria, Afghanistan, Colombia and Ethiopia to talk about their concerns to the minister, as well as to announce a new award to recognize immigrant and refugee youth for leadership.

Hussen, himself a former refugee who arrived as an unaccompanied minor from Somalia at sixteen, spoke with the new Canadians about his own experiences, before putting on his gym clothes for a brief game of indoor soccer with them.

One of the participants in the meeting, Fadia Jouny, was anxious about her dad in Syria.

In the wake of the horrific reports of chemical attacks in Syria and the U.S. bombings that followed, the new Vancouver resident wanted Canada's immigration minister to help get her father away from danger.

"My father's in Latakia, which is close to Idlib," said Fadia Jouny, referencing the recent chemical attacks in Idlib by Syrian President Bashar al-Assad.

Jouny arrived with her family two years ago, after fleeing the war in Syria. "I haven't seen my dad for four years, so I asked the minister if he can do something to help him come here."

When asked what Ottawa was doing to respond to Syria's worsening situation, he told National Observer:

"We've responded positively to the call to bring more victims of Daesh (Islamic State) atrocities to Canada, and we're committing to bringing 1,200 predominantly Yazidi women and girls to Canada."

Without specifying which region the refugees would come from, he said the government would "continue to also work with UNHCR (United Nations High Commissioner for Refugees) to identify the most vulnerable people who are in need of resettlement."

The minister told National Observer that another topic that youth raised with him during their private meeting was about paying back loans to the federal government.

"They said with language services, people are too busy working minimum wage jobs to make a living so they may not have the time to access language programs provided," Hussen said.

In terms of their debts, nearly all government assisted refugees have their travel and medical costs covered by the Canadian government, but have to begin repaying their loans to Ottawa within 30 days of arrival to Canada. Refugees owing more than $4,800 have six years to repay the loan in full before interest starts to kick in, while people with loans under $1,200 have one year to pay off the loan without interest.

Hussen said the fact that they were concerned about the loan repayment showed the "level of maturity" of the group, many of them still teenagers. While this loan repayment system has been in place for decades, critics such as MP Jenny Kwan, New Democratic Party immigration critic, argue that the loans should be forgiven, as refugees sometimes sacrifice basic needs like buying groceries, or postponing university education for their children in order to repay their travel loans.

Nineteen-year-old Hana Woldeyes from Ethiopia said she was encouraged to meet a federal minister who had come as a refugee, because he "has walked in our shoes, and we're following his footsteps."

Sajedeh Zaki, a 17-year-old from Afghanistan, said she was honoured to meet with the minister, but hoped Ottawa would respond directly to the issue of family reunification, which is a major concern for many refugees in Canada.

"[Minister Hussen] did talk about the loans and services, but he didn't really talk about reunification, which is also a really, really important thing for myself, and some other youth who are living without one of their parents," she said.

Vancouver Foundation president and CEO Kevin McCort, who was also at the meeting, said that so far, Canada's response to the global refugee crisis has been positive, with many refugee youth being accepted into their new home country.

"Canadians have a willingness to support refugees and try to make it a community initiative. So many of us have immigrant backgrounds so we understand intuitively that this is necessary and good," he said.

"But the scale of the refugee crisis has never been bigger, and Canada can always do more."

He said Canada has always been a strong supporter of organizations such as the United Nations High Commissioner for Refugees, but that its international aid as a percentage of the economy remains one of the lowest of the world's developed countries, at 0.3 per cent of the economy.