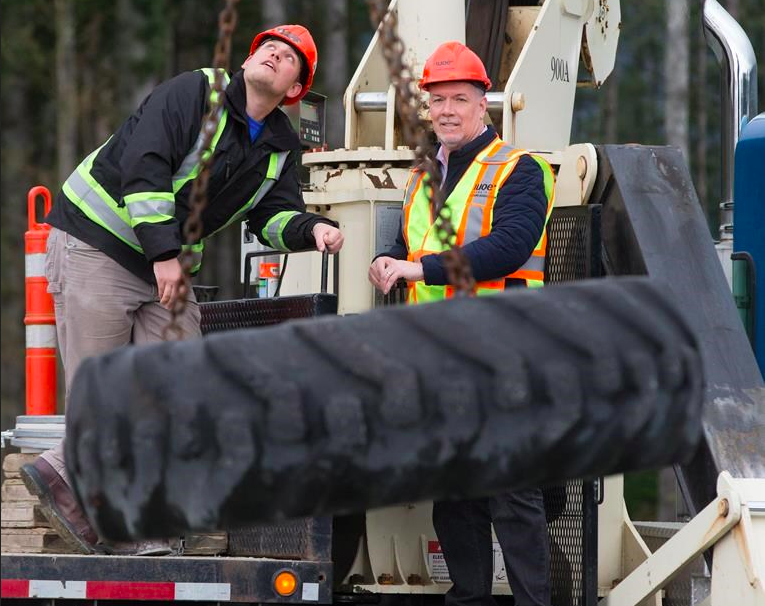 File photo of BC NDP leader John Horgan by the Canadian Press. Horgan has declined to express support or opposition for the controversial Site C project.
Previous story
Next story

The divisive $8.8-billion Site C dam is fuelling debate in British Columbia's election campaign, pitting Liberal promises of jobs and clean energy against the NDP's cautious approach of calling for an independent review.

Premier Christy Clark used the megaproject in northern British Columbia as a backdrop Tuesday to campaign on the Liberal government's record on employment and economic growth. She said Site C has been a job creator, with more than 275 B.C. businesses involved in construction.

"We need reliable power, we need affordable power and we need it to be clean power," Clark said at a concrete company in Fort St. John in northeastern B.C. "And the only way to achieve that is through the Site C clean energy project."

The dam will be the third on the Peace River, flooding an 83-kilometre stretch of valley, and local First Nations and farmers have fiercely opposed the project. But job fairs for the project have also drawn hundreds eagerly seeking work.

NDP Leader John Horgan has declined to support or oppose the dam ahead of the May 9 election. He has said a New Democrat government would send the project to the B.C Utilities Commission for a review on whether it should proceed.

It was once standard practice for BC Hydro projects to be reviewed by the commission, but the Liberals' clean energy laws have allowed some major projects to bypass the independent regulatory agency.

The dam is two years into construction and has been approved by the federal government, but Horgan did not directly answer a question on whether a recommendation by the commission could realistically stop the project.

"I think the public, who have seen their hydro rates go up 87 per cent over the past 16 years, have every right to understand from a third party, the utilities commission, whether this is a good project or not," he said.

"That's the commitment we've made and that's what we're going to do."

Clark said shutting down the project would hurt the province.

"They (opposition parties) have a reckless scheme that would leave British Columbia families and businesses literally in the dark."

Her comments came as a new report by researchers at the University of British Columbia concluded that work on Site C should be suspended because it is now more expensive than other energy alternatives.

The analysis says cancelling the project as of June 30 would save between $500 million and $1.65 billion.

"The business case for Site C is far weaker now than when the project was launched, to the point that the project is now uneconomic," Karen Bakker, Canada research chair in political ecology and director of the university's program on water governance, said in a news release.

"The good news is that we are not past the point of no return."

Clark said she hasn't seen the study but the hydroelectric project is about meeting the province's energy needs in the future and work has to start now to meet that demand as the economy grows.

"So if the electricity isn't going to be needed for 10 years, when do they expect us to start it? Nine years from now? Eleven years from now?" she asked.

"I think professional electricity planners in that field are better qualified to make the estimates about how much energy we're going to need in 10 years than academics at UBC who are probably not in the field of electricity use at all."

Green party Leader Andrew Weaver has promised to kill the dam, after initially supporting it in 2010. He has said an environmental assessment completed in 2014 highlighted the permanent damage the project would have on the environment, farmland and wildlife. The Greens also the dam would merely provide cheap energy to liquefied natural gas (LNG) projects the Liberals are promoting for the B.C. coast.

We need to develop ALL

We need to develop ALL sustainable electricity options in order to have non-fossil energy power us day & night.