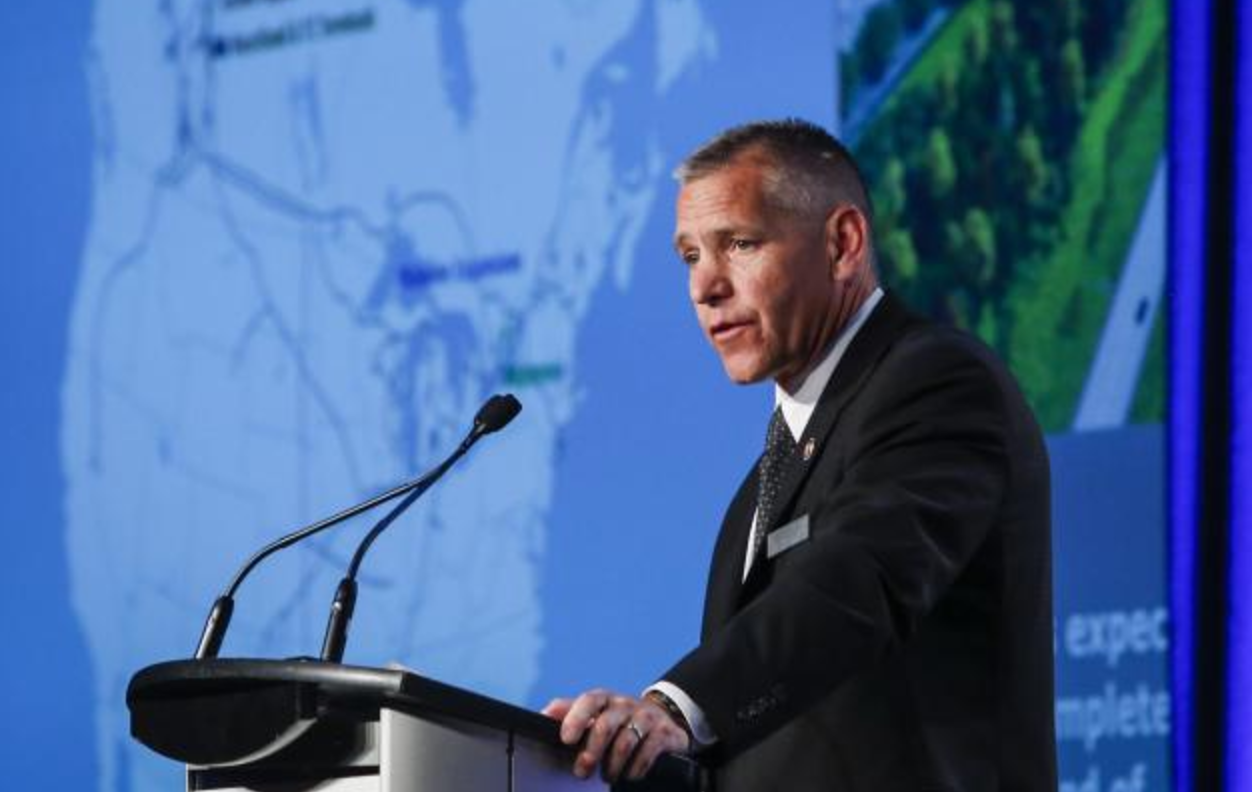 Russ Girling, president and CEO of TransCanada Corporation, addresses the company's annual meeting in 2015 in Calgary, Alberta. Photo by The Canadian Press
Previous story
Next story

Canada's largest corporations want to stop a federal panel from investigating how a cross-country oil pipeline would contribute to global warming.

The Canadian Chamber of Commerce and other industry stakeholders raised their objections in a series of letters sent to Canada's pipeline regulator, the National Energy Board (NEB), over the past few weeks.

The complaints are the latest in a saga of controversies that have plagued the Calgary-based TransCanada Corp.'s Energy East oil pipeline, the largest project of its kind ever to be proposed in North America.

The NEB restarted its formal review of the pipeline in 2017 following concerns that it was rigged in favour of the oilpatch. But the regulator now faces a complaints from big oil and big business over its plans to expand the scope of its review of the project.

In a newly-released letter, TransCanada's legal team argues that the new proposal from the NEB, made necessary because of conflict of interest allegations, isn't fair.

Lawyers wrote that an analysis of greenhouse gas emissions for the proposed 4,500-kilometre Energy East pipeline would be "completely redundant and unnecessary," given that such analysis falls within the purview of the federal government. The details are in the Canadian government's Interim Measures for Pipeline Reviews, they said.

In the letter dated May 17, they further argued that NEB panelists have previously declined to consider upstream emissions in their review of pipeline projects, and the NEB "strives to achieve continuity, consistency and a degree of predictability."

"There has been no change in law or government policy or regulatory policy that would justify departing from the previously stated (and judicially endorsed) approach to dealing with upstream and downstream GHG emissions," the lawyers wrote.

The letter was provided to the NEB in English only, and the NEB has confirmed that it has no plans to translate the letter into French. In the past, TransCanada has failed to provide timely French versions of its official documents on the project — a delay that many concerned Quebec residents have amounted to discrimination.

A letter submitted to the National Energy Board by TransCanada Corp. lawyers calls the evaluation of greenhouse gas emissions on its Energy East pipeline "unnecessary." Letter courtesy of the NEB

Energy East would ship up to 1.1 million barrels of oil per day from producers in Alberta, Saskatchewan and North Dakota to refineries and marine ports in Quebec and New Brunswick.

​A report by the Pembina Institute calculates it could generate more than 30 million tonnes of climate-warming GHG emissions per year — a greater amount than TransCanada's infamous Keystone XL proposal. Canada signe the Paris Agreement on climate change in 2015, which requires countries to introduce policies that reduce heat-trapping pollution in order to keep global warming below two degrees this century.

“If they’re not willing to look at the greenhouse gas emissions that are associated with their pipelines, then I guess they shouldn't be allowed (to build them)," said Karine Péloffy, executive director of the Quebec Environmental Law Centre, in an interview.

"We have more and more evidence coming from other countries — the United States, Austria — countries are striking down environmental assessments that fail to take into account the global climate impact of fossil fuel projects. I don't see how, post Paris Agreement, in a country that is still committed to the Paris Agreement, we think we can have environmental assessments of massive fossil fuel infrastructure without looking at their climate impacts."

Last month, a new panel assigned to review Energy East announced plans to consider not only upstream and downstream GHG emissions in its assessment, but federal and provincial climate change targets, strategies and policies as well. They were named on a draft list of topics for consideration during public hearings for the project later this year, and the public had until May 31 to comment on them.

TransCanada's lawyers disputed the legality and necessity of those considerations in a letter sent to the NEB seven days after the announcement. They also asked the NEB to give the oil company until June 21 to respond to public comments on the topics "in compliance with the Board's duty to be fair."

The Canadian Chamber of Commerce, which represents 200,000 businesses on national and international issues, sent a similar letter to the NEB on May 31, objecting to the inclusion of upstream and downstream GHG emissions and Canadian climate targets and policies in the review of Energy East.

"Having the regulatory process consider the pipeline's impact on upstream and downstream emissions would amount to an inefficient duplication of effort," it said. "The most effective approach to managing greenhouse gas emissions from oil production, refining, or use is for government to regulate these areas directly." 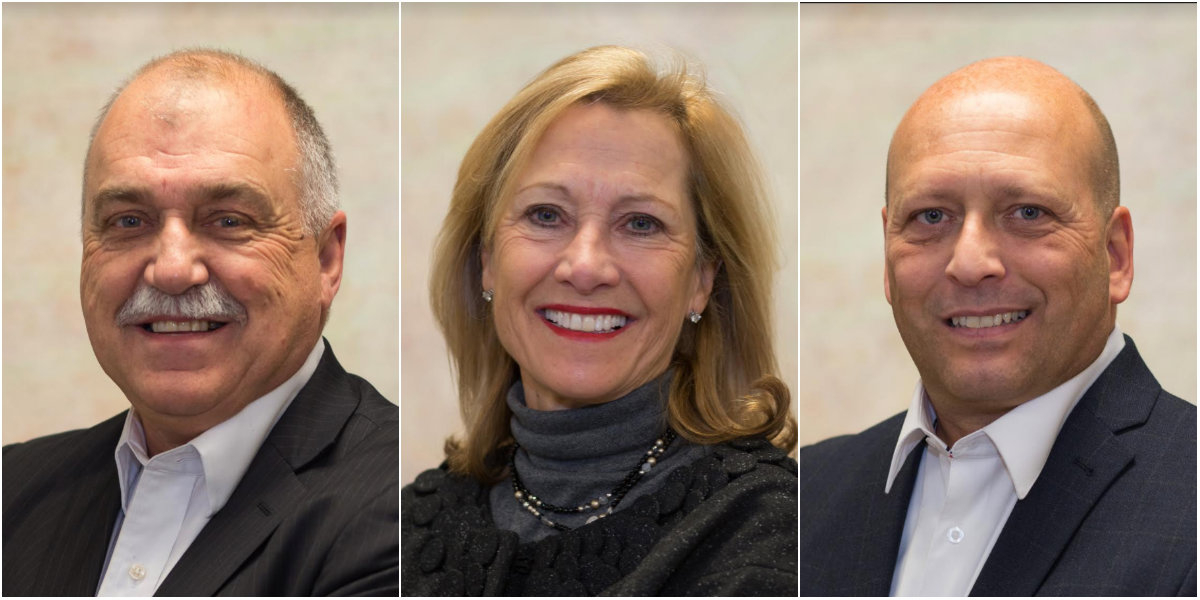 The NEB granted TransCanada's request to respond to public comments, and declined to respond to the company's argument that factoring in climate change isn't fair.

"The lists of issues are still in draft form," emphasized NEB communications officer Sarah Kiley in an email to National Observer. "We have received hundreds of comments from the public and the applicant has until June 21 to submit their reply to these comments. The Hearing Panel will not finalize the lists of issues until they have reviewed and considered these comments."

The Energy East review process was the subject of controversy and revision over the years, with the original panel replaced by a new one after a conflict-of-interest scandal. That new panel, appointed in January, restarted the review virtually from scratch in January 2017, amidst allegations that the pipeline's previous review panel had been too cozy with the industry proponent it was appointed to review objectively.

An award-winning investigation by National Observer last year found that the NEB's chairman and CEO, Peter Watson, along with two of its panelists, had met privately with a paid consultant for TransCanada Corp. who gave them advice about how to gain public support for the project among Quebec residents. The consultant was former Quebec premier Jean Charest.

The new panel has since voided any and all decisions made by that panel.

In 2015, TransCanada retreated from plans to build an oil terminal in Eastern Quebec as part of the project following a public outcry that it would threaten the habitat of endangered beluga whales.

TransCanada should be "fair"

TransCanada should be "fair" towards the rest of the world as people are dying prematurely, here and in other countries, because of water and air pollution caused by burning fossil fuels. It's not an economic problem, it's a moral obligation. We can't afford to put more carbon in the air.

Ask TransCanada how fair it

Ask TransCanada how fair it has been to landowners who are impacted by their current and proposed pipelines? They are not forthcoming with information despite repeated requests, and use every ruse available to avoid providing same.
TransCanada is morally bankrupt. Money and deviance are their credo and culture.

This is an important news

This is an important news story for Canadians. The NEB process under Harper used a silo-approach to regulation. One company digs the tar/oil. (Silo #1). Another company carries the tar/dilbit/oil (Silo #2). Somebody somewhere else refines the tar/dilbit/oil/jet fuel/gasoline (Silo #3). A lot of people everywhere burn the stuff in ICE (internal combustion engines) vehicles, etc. and maybe/maybe not pay a carbon tax (Silo #4). Upstream and Downstream are always separated and nobody is destroying the environment when looked at in this silo system. Now the NEB is saying that it is all connected and the aggregated GHG's need to be counted. I think the Canadian Chamber of Commerce better get onside with this