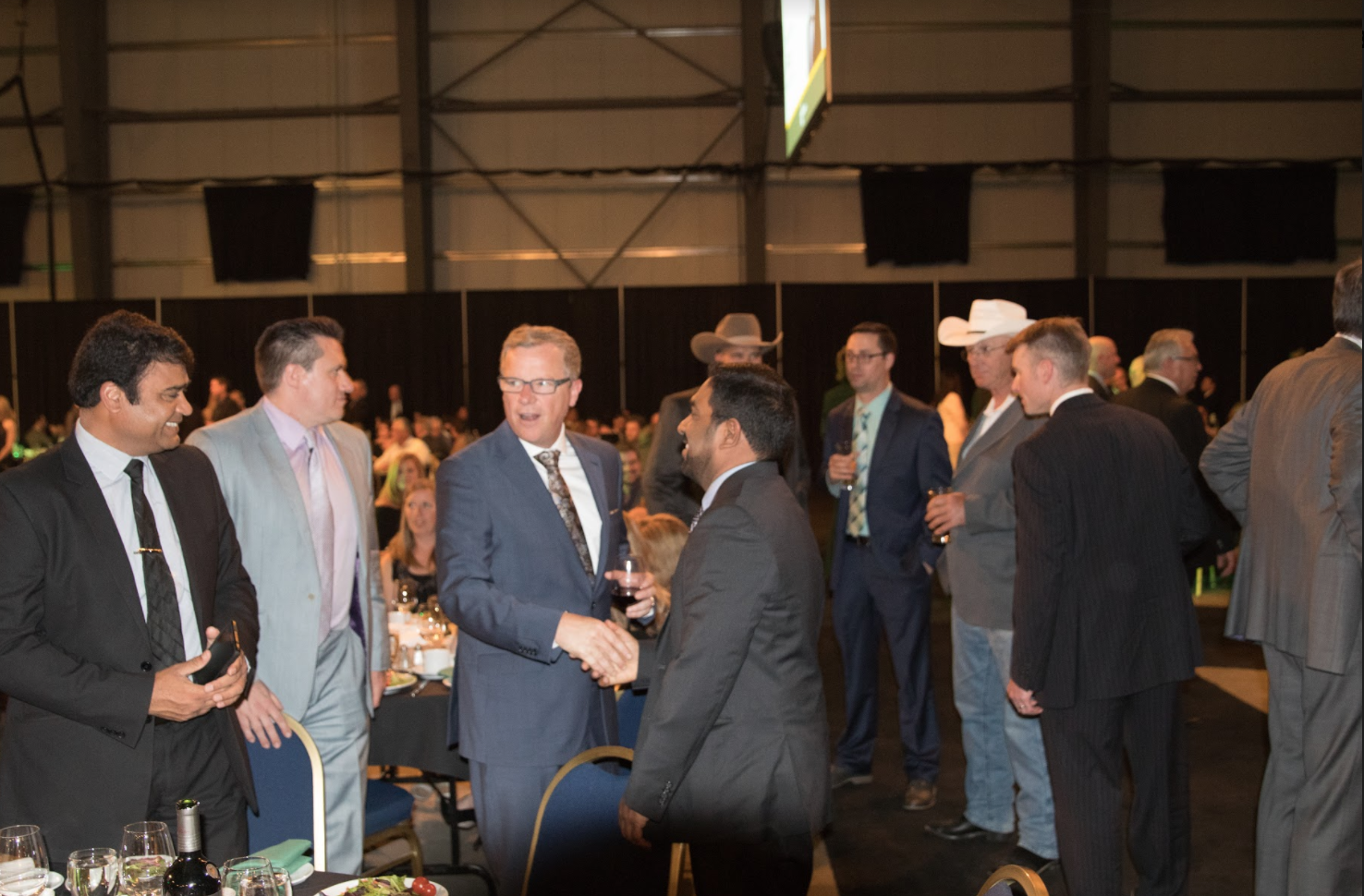 Corporate donors spent thousands of dollars in cash to wine, dine and hear a speech from Saskatchewan Premier Brad Wall at an exclusive party fundraising dinner last week in Regina.

On June 1, oil and gas industry titans from such companies as Crescent Point Energy, Imperial Oil and Enbridge, paid $250 per person or up to $5,000 for a sponsored table to have access to the politician, as he bashed the idea of carbon pricing and promised to protect "the most exposed industry in the country."

Wall's speech was interrupted by a lone protester: Chelsea Flook, an organizer with the grassroots advocacy group, Stop the Cuts, stood up and tried to shame the premier for slashing the budget for key social and educational programs. Stop the Cuts formed earlier this year, after the Saskatchewan Party released a spring budget that cut back subsidies for long-term care residents, reduced funding for classrooms from pre-kindergarten to Grade 12, and slashed post-secondary scholarships funding and student aid, among other rollbacks.

Wall asked the audience for a round of applause for the interrupter, which drowned out Flook’s final cries. Saskatchewan Party MLA Paul Merriman said he would be happy to speak with her another time, and a security guard escorted her out of the room. She left the event hall willingly, spoke to media, and was questioned by Regina police, who drove her off the premises in a vehicle and released her without charge.

It was the first time one of Wall's lavish fundraising dinners was interrupted from the inside, although protests have been popping up all over the province this spring, including outside a Saskatoon fundraiser in April.

Conflict of interest with Crescent?

Saskatchewan is one of the last provinces that still accepts unlimited corporate donations, both from inside and outside the province. Alberta and Ontario recently banned the controversial practice, and Wall's Thursday night dinner took place a day after after the federal government introduced legislation that would do the same.

The concern among industry watchdogs is that the rich and powerful use these dinners to buy political influence that supports their business or personal objectives. In British Columbia, investigations recently revealed that donors to Premier Christy Clark's Liberals received nearly twice as many contracts from the provincial government on average than companies that didn't donate.

At Wall's dinner on Thursday, Calgary-based Crescent Point Energy — which recently withdrew its membership from the Canadian Association of Petroleum Producers so it could openly oppose the federal carbon tax — bought a table, and was recognized as a sponsor in the opening announcement. The cost of such a 'thank you' is $5,000, the company's government and stakeholder initiatives manager, David Gowland, told National Observer. It also comes with access to a special pre-dinner “Committee and Sponsors Reception.”

Wall is a shareholder of Crescent Point Energy, as well as two other Alberta-based oil companies whose headquarters he tried to lure to Saskatchewan: Canadian Natural Resources and Whitecap Resources. That revelation wound up before the province’s conflict of interest commissioner, Ron Barclay.

Wall and his wife have invested $36,000 altogether in these three companies, and in March, Barclay ruled that no conflict of interest exists because it "is not a significant sum of money when compared to the total market capitalization of these companies."

Crescent Point has 50 registered lobbyists in Saskatchewan, where most of its new drilling is taking place, and is one of the largest oil producers by volume in the province, said Gowland. Wall has previously written to oil companies in Alberta, including Crescent Point, encouraging them to move their headquarters and operations to Saskatchewan for its less stringent regulatory framework.

His sales pitch continued at the event, where he called Alberta’s carbon-taxing New Democratic Party government bad for business.

In a media scrum after his speech, Wall declined to answer questions about the future of cash-for-access events in the province, but Saskatchewan Party executive director Patrick Bundrock told the Regina Leader-Post that these dinners are "very, very important funding mechanisms for the party." They don't buy influence, he explained, but are an important part of how parties put their budgets together.

Gowland, however, told National Observer that Crescent Point Energy makes political donations to "support the political process," and "be part of the discussion." The company also gave to the Alberta NDP, he added, before corporate donations were banned in the province.

Asked whether events like the premier's dinner were used to buy influence, Gowland responded: "No, there were over 1,000 people there, so it's not a good use of funds for cash-for-access."

The better avenue, he explained, is Crescent Point's bureaucratic involvement in Saskatchewan's government through the use of registered lobbyists. According to Gowland, the lobbyist system is an improvement because it gives "more transparency" and "everything is above board."

Among other big businesses at last week's dinner were Enbridge, Imperial Oil, and oil industry financiers, the Royal Bank of Canada, TD, and the Bank of Montreal. Enbridge and BMO did not respond to National Observer's requests for comment on this story in time for publication.

Imperial Oil issued a short email statement saying that its "political contributions are not limited to a single party or province." TD Bank's communications manage for the Prairies, Dean Paddock, wrote in an email statement, "We contribute to the political process and have no desire to pursue influence."

RBC also added via email: "While we were not a sponsor of this event, our involvement in political contributions varies by region, and the respective policies allow for contributions to a political party, candidate or campaign only as permitted by law and only as an expression of responsible citizenship — not to purchase favours or gain improper advantage."

Cheers against the carbon tax

Saskatchewan is the lone province opposing planned introduction of a federal carbon tax requiring polluters to pay per tonne for climate-warming emissions. At the fundraiser, Wall pledged to keep fighting the tax to protect “the most exposed industry in the country,” the oil and gas sector.

The audience cheered in response.

In his speech, Wall also acknowledged U.S. President Donald Trump's decision to withdraw from the international Paris climate accord. That means no carbon tax south of the border, he said.

Wall further warned participants of business risks associated with the Leap Manifesto — a document crafted in part by bestselling author Naomi Klein that calls for a radical restructuring of the economy to end reliance on fossil fuels.

The entire affair troubled Flook, who helped organize a Stop the Cuts demonstration outside the fundraising event. In addition to major budget cuts to key social programming, the organization opposes new legislation to sell of up to 49 per cent of Saskatchewan's Crown corporations.

In an interview with National Observer, Flook said Wall's Saskatchewan Party policies have a detrimental impact on the environment.

“Shutting down a public transit system is going in the wrong direction when it comes to combating climate change,” she explained, referring to the end of inter-city Saskatchewan Transportation Company operations on May 31.

Flook also said that in the six years before devastating wildfires in 2015, the province cut 45 per cent of its budget for fighting the natural disaster. The province was left more susceptible to damage, she argued, resulting in expenditures of $100 million to compensate.

That cash, she believes, came from provincial education and health care.

"What I would call that is climate-change driven austerity, where you refuse to plan for what scientists say is coming, and then when disaster comes you say, ‘Oh we spent all this money, now we’re going to have to take it out of public services.’ So it’s cyclical in this province.”

When dessert was cleared at 9 p.m., Saskatchewan Party communications staffer Dale Richardson asked National Observer's reporter to leave the event, as the portion open to media had ended. The majority of attendees, including the premier and those at the Crescent Point table, stayed a while longer.

Editor's Note: This story was updated at 6:30 p.m. Eastern Time to include a statement from RBC.

Opinion: Corporations should be careful about think tank donations

Isn't the NDP neck in neck or

Isn't the NDP neck in neck or ahead of this Corporate loving party? He's on his way out and gasping for money and a future for 'after' he sells out Saskatchewan and the people he pretended he cared about. Some land deals that still need looking into, especially the one where he and his cohorts ripped off the nuns.

Saskatchewan's GHG emissions went from 70 million tonnes (Mt) carbon dioxide equivalent (CO2 eq) in 2005 to 75 Mt in 2015, an increase of 7.8%. At 64.75 tonnes per capita, Saskatchewan has the highest per capita emissions in Canada, and one of the highest in the world.
Wildfires across Canada emits on average 27 Mt (CO2 eq) into the atmosphere. During the 1990-2011 period, annual emissions directly from wildfire ranged from a high of 264 Mt (CO2 eq) in 1995 to a low of 11 Mt in 2000. In 2011, the managed forests in Canada acted as an overall "net carbon source", releasing 84 Mt (CO2 eq) to the atmosphere. In 2014, this net flux amounted to emissions of 71 Mt, which, if included, would increase the total Canadian GHG emissions by about 9.8%.
(source: Natural Resources Canada Indicator, 2016-11-01: "Carbon emissions and removals")
The federal government doesn't take these emissions into account in it's annual "National Inventory Report on Greenhouse Gas Sources and Sinks in Canada". Contrary to all scientific studies made by different federal government departments analyzing GHG emissions from managed forests in Canada, the federal government considers that emissions due to natural disturbances (e.g. wildfires, insect infestations such as the mountain pine beetle) are not the result of human activities, especially human activities related to climate change (Canada's Second Biennial submission to the UNFCCC, April 2016, section 5.1 footnote).
Scientists at NRC's Canadian Forest Service predicts that the forest area annually burned is Canada is likely to double by the end of the century (it has already doubled compared to the late 1970"s), mostly the result of a changing climate. More emissions will lead to accelerated climate change, which in turn will enhance the conditions that create more carbon-releasing disturbances in Canada's forests. Canadian boreal forest and peatlands will be severely affected by forest fires and other impacts related to climate change. Canadian managed forest area in the boreal zone (145 million ha) stores approximately 25 billion tonnes of carbon. The combined Boreal and Subarctic regions contain 97% (142.94 billion tonnes) of the soil organic carbon mass occurring in Canadian peatlands, which 52% (74.16 billion tonnes) will be "severely or extremely severely" affected by climate change.
(source: NRC , 2013-12-04: "Peatland fires and carbon emissions")
Saskatchewan's decision to cut resources fighting natural disasters like wildfires will only make the situation worse. It is urgent for Canada and Canadians to get serious about reducing drastically our GHG emissions, before what many scientists qualify as a "carbon bomb" explodes in our face.