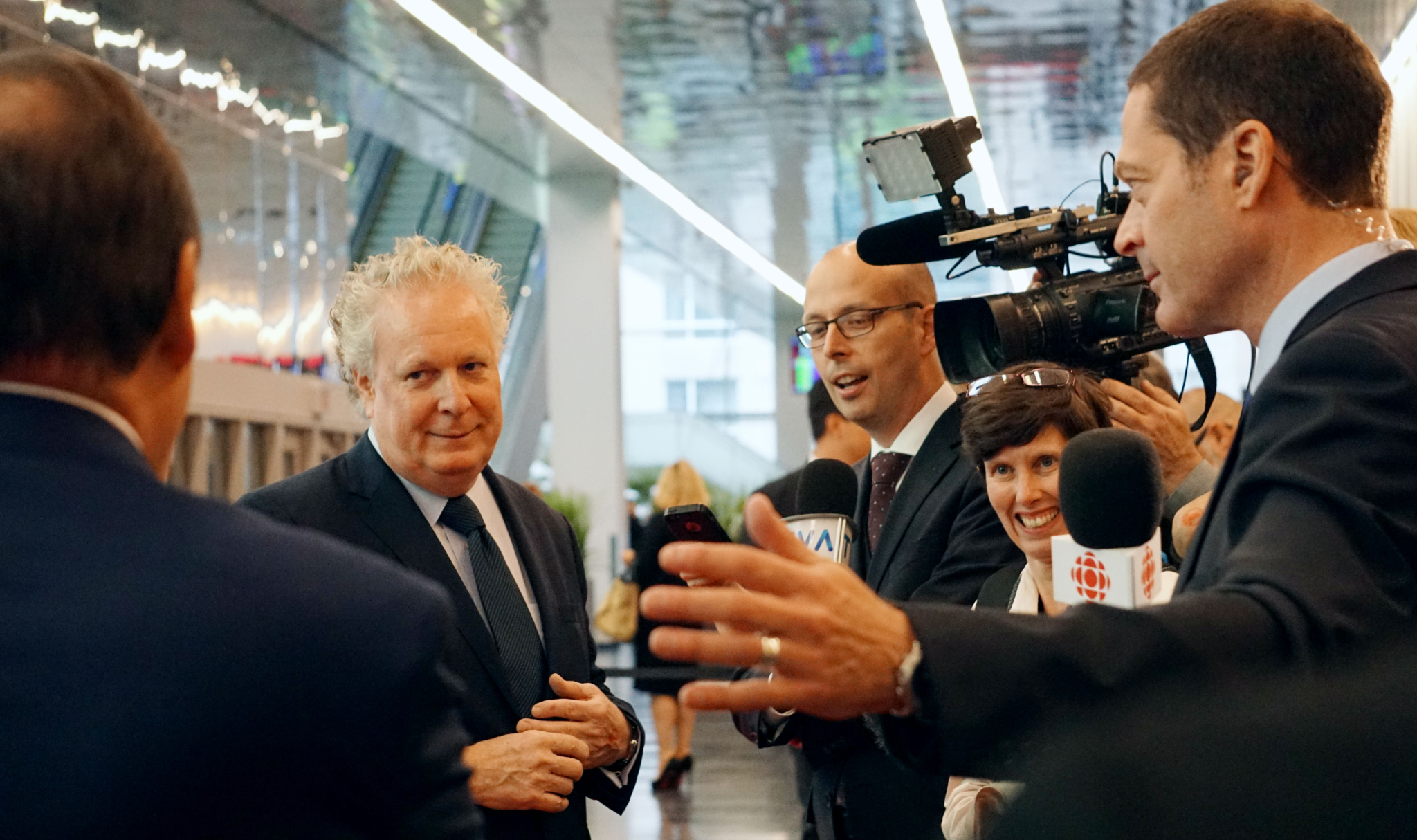 Former Quebec premier Jean Charest is still refusing to answer media questions about a private meeting he had in January 2015 with members of Canada's federal energy regulator, while he was under contract for a major Canadian energy company.

On Tuesday, as Charest spoke with reporters before former U.S. president Barack Obama's speech in Montreal, National Observer asked him: Do you feel responsible for shutting down the Energy East pipeline hearings?

"I'm not here for that," said the ex-politician with a smile.

He hastily walked the remainder of the red carpet at the VIP entrance to the event and slipped inside the conference room. He had taken other media questions that afternoon about his expectations of Obama's speech.

The Charest Affair, one year later

It's been nearly a year since National Observer published the first piece in an award-winning investigative series that eventually became known as 'The Charest Affair,' revealing that Charest gave members of the National Energy Board (NEB) political advice about how to build public support for a pipeline project application they had been assigned to review objectively.

At the time, Charest was working for Calgary-based TransCanada Corp., and the NEB was assessing TransCanada's 4,500-kilometre Energy East pipeline proposal. Their meeting in January 2015 raised concern among watchdogs and environmentalists that NEB panelists were in a conflict of interest and their review of the pipeline would be biased.

One of the emails obtained by National Observer indicated that Charest's executive assistant — from his law firm — contacted Board member Jacques Gauthier using the NEB member's personal email address. A separate email also revealed that Gauthier personally invited the former premier to discuss the Energy East project at the private meeting.

Gauthier has said he wasn't aware Charest was working for TransCanada at the time of the January 2015 meeting.

Since the scandal was made public in July last year, the NEB shut down the hearings on the controversial pipeline, and the entire process was restarted virtually from scratch after the appointment of a new panel.

A pattern of silence

While participating in a variety of interviews over the last year on trade, foreign policy and other subjects, Charest has never answered questions about the scandal surrounding his involvement with the NEB and the Energy East pipeline.

In a similar vein, TransCanada has declined to answer questions about whether any of its employees were informed about Charest's meeting. But in a recent legal submission to the NEB, the pipeline company has objected to the current panel's proposal to consider the climate change impacts of the project and complained that the new process is unfair.

Charest's latest silence comes less than a month after the NEB announced that it would not hold a public inquiry into 'The Charest Affair,' and that all documents related to Charest's meeting with panel members would be kept a secret.

In the interests of restoring public trust in the federal regulator and strengthening the environmental review process, a federally-appointed panel recommended replacing the NEB. The organization should operate under a new name, the Canadian Energy Transmission Commission, said the report, and its board of directors should be based in Ottawa — further away from oil and gas industry headquarters in Calgary.

The regulator has currently launched a public consultation process to redesign hearings for the Energy East pipeline, along with TransCanada's lesser-known Eastern Mainline project. The former would ship up to 1.1 million barrels of oil per day between the Prairies and Canada's East Coast, while the latter would add 279 kilometres of new natural gas pipeline and nine compression units to the Canadian Mainline system that delivers natural gas in Ontario and Quebec.