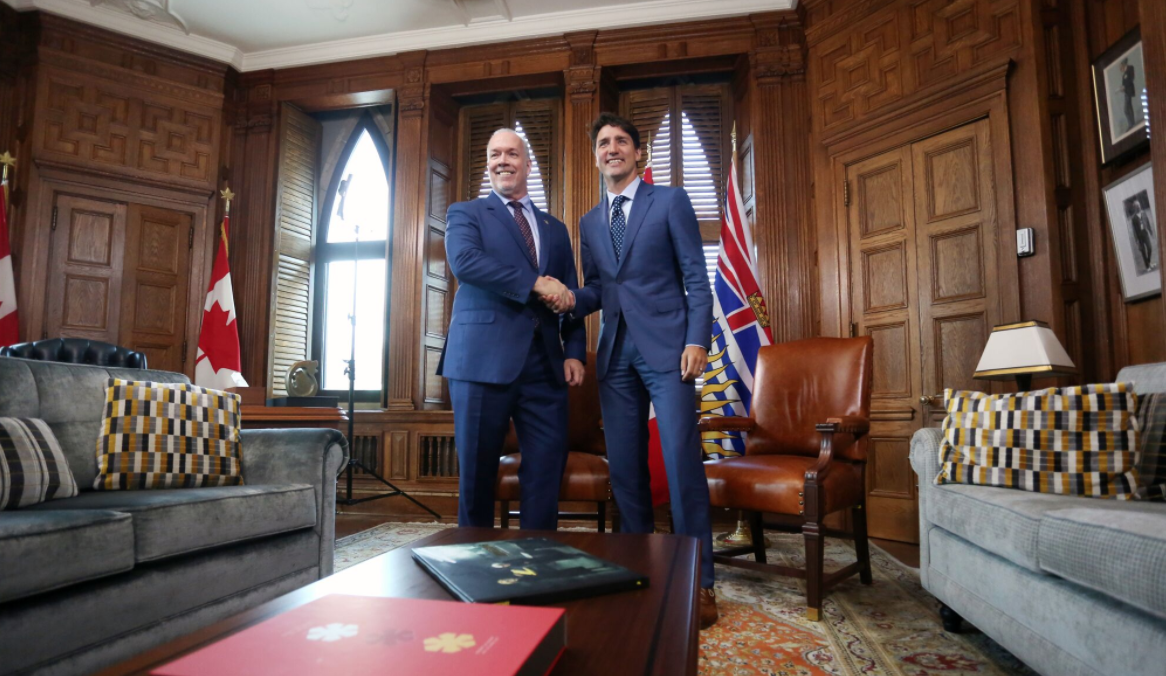 British Columbia Premier John Horgan may have vowed to fight Ottawa's latest pipeline approval "with every tool available," but he made it clear on Tuesday that he's not ready for a political showdown — yet.

The BC NDP leader delivered this message to reporters after meeting Prime Minister Justin Trudeau on Parliament Hill for the first time since the BC New Democrats were sworn in as a minority government last week. The two leaders said they discussed the province's raging wildfires and red hot real estate market, along with solutions to the opioid crisis and U.S. softwood lumber dispute.

Trudeau and Horgan emphasized how much they have in common, from their matching polka dot ties to a broad range of "progressive" priorities on Indigenous reconciliation, climate action and supporting the middle class.

But no amount of coincidental colour co-ordination or unified political messaging could camouflage the elephant in the room: the Kinder Morgan Trans Mountain pipeline expansion project on which they starkly stand divided.

Horgan and Trudeau focus on "commonality"

"I’d like to focus on what we have on common," said Horgan during a press conference with Trudeau after their meeting. “It’s ultimately the commonality...that we discussed today; the importance of having someone leading the country as prime minister who has deep roots in British Columbia is a tremendous opportunity for us on the west coast."

Horgan suggested that he and Trudeau had more pressing priorities than the pipeline disagreement, including a state of emergency triggered by wildfires that have displaced tens of thousands of B.C. residents. The province is also facing an opioid overdose crisis that is expected to cause more than 1,400 deaths this year.

The Trans Mountain expansion is a proposal to add 987 kilometres of brand new pipeline to an existing Alberta-to-B.C. system that already transports 300,000 barrels of oil per day to the west coast. Upon completion, it would triple the system's capacity to 890,000 barrels per day and increase tanker traffic in local waters by more than 600 per cent as it ships its product to American and overseas markets.

The project was approved by the federal government and former B.C. government late last year and is scheduled to begin construction in September, pending a number of provincial permits. Horgan indicated that it would be premature to discuss his strategy for fighting the pipeline's approval while he waits for briefings on a number of legal challenges that Indigenous and environmental leaders have mounted against the project.

More than 20 municipalities and 17 First Nations have voiced formal opposition to the Trans Mountain expansion, from across Canada to the United States. They argue that if constructed, it could decimate endangered killer whale and at-risk salmon populations, thrust Canada's climate targets beyond reach, and expose sensitive land and water ecosystems to irreparable harm from oil spills.

Supporters of the project, including the federal government, argue that the pipeline's risks can be mitigated through a variety of safety and spill clean up measures, and that it will create much-needed jobs in both Alberta and B.C.

Asked whether he was prepared to push the pipeline through over Horgan's objections, both Trudeau and Horgan smiled. Trudeau said his administration remains committed to working through "difficult issues" together with the B.C. government.

"Difficult issues come up. We’re going to work together to resolve them," said the prime minister. "We know that decisions we take are based on facts and evidence, and we’re going to continue to stand by the decisions that we took in a respectful way, but we know that we are focusing on growing the economy and protecting the environment at the same time, which is what Canadians right across the country expect from this government."

Their conversation comes just as a Malaysian oil giant, Petronas, announced that it would not proceed with final investments or construction of another controversial B.C. development project: the Pacific NorthWest LNG project. The $36-billion liquified natural gas project was approved by the federal government last fall, and if constructed, would have been one of the single largest emitters of climate warming greenhouse gas emissions in Canada.

There is a solution. Ship

There is a solution. Ship undiluted bitumen by rail to the coast. This does not require new expensive infrastructure and can easily be terminated if necessary. It is likely to be cheaper than shipping diluted bitumen by pipeline.