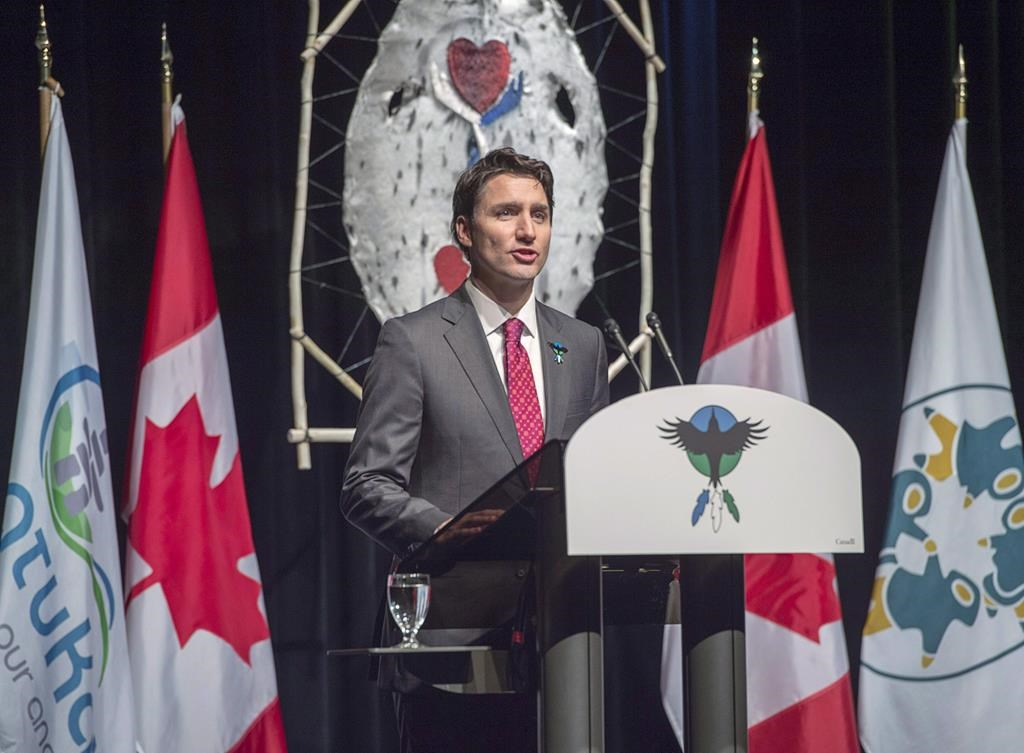 Justin Trudeau delivers an apology on behalf of the Government of Canada to former students of the Newfoundland and Labrador Residential Schools in Happy Valley-Goose Bay, N.L. on Nov. 24, 2017. File photo by The Canadian Press/Andrew Vaughan
Previous story
Next story

When it comes to politics, Justin Trudeau has demonstrated repeatedly that he's not his father's son — and he'll do it again today when he offers an official apology for members of the military and federal public servants whose careers were destroyed due to their sexual orientation.

Today's apology marks the second time in a less than a week and the third time since becoming prime minister that Trudeau has apologized on behalf of the government for a historic injustice — something his father, Pierre, steadfastly refused to do.

"Certainly, a number of people have highlighted, and I have this reflection as well, that my father might have had a different perspective on it than I do," Trudeau acknowledged during a social policy conference Monday at the University of Toronto.

Trudeau, a gregarious people-person, has remarked before on the difference between his approach to politics and that of his aloof, cerebral father. And he offered that as an explanation for their different approaches to attempting to right historic wrongs.

"He came at it as an academic, as a constitutionalist. I come at it as a teacher, as someone who's worked a lot in communities," he said.

Back in 1984, Pierre Trudeau rebuffed pressure to apologize and compensate Japanese Canadians who were interned and stripped of their property during the Second World War. He questioned how his government could apologize for an event 40 years earlier in which it had not been involved.

"I do not think the purpose of a government is to right the past. It cannot rewrite history. It is our purpose to be just in our time," he told the House of Commons.

Moreover, once a government starts down that path, he warned there'd be no end of apologies and compensation demanded.

"I'm not sure where we would stop in compensating. I know we'd have to go back a great length of time in our history and look at all the injustices."

His Conservative successor, Brian Mulroney, eventually apologized in 1988 for the internment of Japanese Canadians. But that didn't exactly open the floodgates, as Trudeau senior had feared.

Since then, there have been five more official apologies: for the execution of Canadian soldiers during the First World War, for the head tax imposed on Chinese immigrants, for the harm done to Indigenous Peoples from the residential school system, for turning away shipload of immigrants from India in 1914 and, last week, a separate apology for residential school survivors in Newfoundland and Labrador, who were left out of the earlier apology.

In addition to today's recognition of the harm done by state-ordered discrimination against gay, lesbian, bisexual and transgender Canadians, Trudeau has also signalled that he'll apologize for the government's decision in 1939 to turn away a ship full of Jews fleeing Nazi Germany.

"The apologies for things past are important to make sure that we actually understand and know and share and don't repeat those mistakes," he said Monday.

"But apologies are also really important to be able to move forward in a healing way, that acknowledges the very real intergenerational impacts or impacts on an individual, around mental health, around self worth, around how you fit in to your community."

Like his enthusiasm for taking part in gay pride parades, Trudeau said today's apology is important for LGBTQ Canadians who still face "so much discrimination." But it's also useful, he added to "remind everyone else that we do have to change mindsets."

Jordan Stanger-Ross, a University of Victoria historian who is heading up a national research project on the dispossession of Japanese Canadians' property, suggests on this issue at least Trudeau has chosen a better approach than his intellectual father.

In his work, Stanger-Ross said he's seen the "long-lasting impact" that the push for redress and the ultimate apology had for Japanese Canadians.

The apology "helped rebuild Japanese Canadians' faith in the country as being a place that would respect their citizenship." And the movement to compel the government to offer redress helped reconnect and unify Japanese Canadians as a community, after being forcibly dispersed during the 1940s.

For other Canadians, Stanger-Ross said the apology raised public consciousness about the treatment of Japanese Canadians, an episode that continues to provide a useful reminder of what can happen when national security concerns are allowed to trump civil liberties.

"These stories of the past animate our society today," he said.

If an apology is treated as "a call to action rather than a moment of closure," he said, "then they can contribute to a Canadian society that deals more justly with both those historical questions and our own present challenges."

In addition to today's apology, Trudeau's government has agreed to compensate members of the military and public servants who were investigated, sanctioned and sometimes fired as part of the so-called "gay purge." It is also introducing today legislation to expunge the criminal records of people convicted of consensual sexual activity with same-sex partners.