Their creative powers turned their experiences from war into a film

By Jenny Uechi | News | December 5th 2017
#27 of 35 articles from the Special Report: Syrian Refugees in Canada 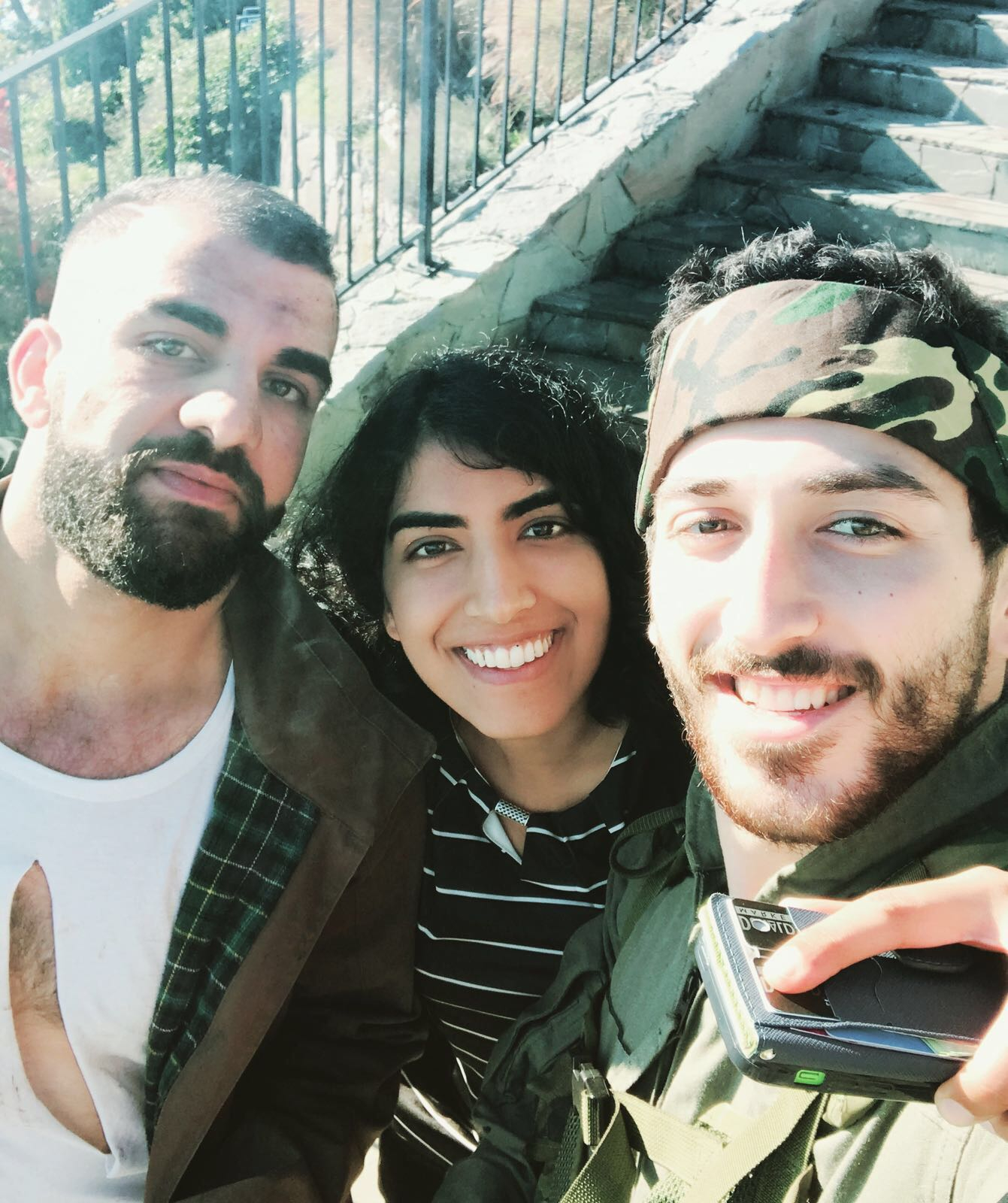 In a soft-focus dream sequence, the refugee meets his long-missing brother, dressed in a military uniform and sitting stoically in the boat. He breaks down in sobs, but is greeted with icy disdain.

"Where do you think you're going?" his brother asks, slapping away his hand.

He shames the refugee for fleeing, telling him he'll never fulfill his dreams outside Syria.

"Do you think they'll accept you?" he mocks. "You want to be an engineer? You'd be lucky to work in a pizza shop!"

Their tense conversation sounds like a rundown of anxieties faced by refugees. Fear of social rejection. Guilt triggered by leaving. The dilemma between death at home and life in exile.

The five-minute short movie, Refugee At Sea, stars young newcomers Abdurrahman Said and Salah Chukair, who escaped the war in Syria and arrived in Canada in 2015 and 2016 respectively.

This film was made during Access to Media Education Society’s DisPLACEment program, funded by the Vancouver Foundation, BC Arts Council and The City of Vancouver. Refugee at Sea, along with six other films, is being screened at a "Fresh Voices" event in downtown Vancouver on December 8. The program examines the challenges of both Indigenous people and newcomers to Canada, who experienced displacement from their home.

Abdurrahman, 25, is a real-life engineering student from Syria who plays the 'refugee' in the movie, while Salah, 21, plays the brother.

"We made this film in English because we want more people to look at it, and understand," Abdurrahman said, in his characteristic deep, resonant voice.

Both Salah and Abdurrahman have overflowing schedules of work, school and family caregiving since coming to Canada.

But when local film director Farhan Umedaly, owner of VoVo Productions, reached out about making a short film documenting the refugee experience, they jumped at the chance. In a burst of feverish activity, they wrote the script in English, spent a whole day on and around the marine waters of West Vancouver to shoot footage. With a drone flying overhead, they captured the heartache of being a young refugee, floating on a boat toward an uncertain future.

In person, Abdurrahman is a friendly, gregarious man dressed in a leather jacket and dark jeans, with an expressive face and passionate way of speaking. His ambition is one day to complete his mechanical engineering degree, which he was working towards when his family got approval to come to Canada.

"When I came to Canada, I promised myself...I have to show people what we have, from our minds, our hearts, how we are thinking," Abdurahman said, driving down a busy street in Vancouver to St. Paul's hospital to see his sister. Even if the film is short, he would be happy if it changed some viewers' fear and mistrust toward refugees.

"Why not? Three minutes can change life of people."

His friend, Salah, is a bookish youth whose sparse room includes English-language economy books and novels, which he's eager to exchange with fellow literature fans. He's learning American Sign Language simply because "it's the third-most-spoken language in the world," and dreams of becoming a video editor like his uncle.

In a serendipitous way, they became friends, and with Canadian-born Farhan, who was moved to help refugees in part because of his own family's history. His father, Mossadiq Umedaly, came to Canada from Uganda after ruler Idi Amin expelled the country's Asian population, and went on to co-found Ballard Power Systems, a pioneer of clean technology.

"My parents came from Uganda as refugees. They're Ismaili. So I thought, as a Muslim, it's good to get involved," he said. "I can feel some of the stereotypes as well."

When Abdurrahman meets Farhan at night in the middle of a huge downpour outside the VoVo Productions studio in North Vancouver, the two greet each other with a warm hug, and share news about recent life events. Abdurrahman has just bought a 2009 Honda and proudly showed it off to Farhan, who smiled at the car with immediate recognition: "An Acura! That's a great car, congratulations, man."

Farhan said he bonded with Abdurrahman after meeting him at an event at Immigrant Services Society of BC (ISSofBC) last year, when he gave a passionate speech about seeing Prime Minister Justin Trudeau greeting refugees at the airport. At the time, he mentioned he had approached the videographer of the event about perhaps learning more about film.

Almost exactly one year later, he'd made a movie with him and several friends he met along the way.

Abdurrahman Said gives a speech at ISSofBC about arriving to Canada, at an event in December 2016. Video by Jenny Uechi

"We just hit it off right away," Farhan said, about Abdurrahman. "I could see he was friendly and a real go-getter. So we just became friends. Almost like a brother."

"Yeah. He's like my brother," Abdurrahman smiled. "He invited me to this program, said, 'I know you're interested. Let's do this together.'"

For the script, Farhan asked Abdurrahman questions, while Abdurrahman poured his thoughts out and typed them out.

"I always tell Abdurrahman, 'You're a strong man. You can do this,'" Farhan said with encouragement, knowing how Abdurrahman was saddled with a hectic schedule to help pay his family's rent and bills.


​Abdurrahman said he had to make the movie to humanize refugees who were often portrayed as nameless, clamouring masses in news reports, sparking fear and distrust from locals. More than five million Syrians fled the country to escape a brutal civil war, sparking fear and distrust in Europe along with political backlash for leaders such as German chancellor Angela Merkel who had opened her country to them while others shut them out. The Canadian government won widespread praise for accepting over 40,000 Syrian refugees since November 2015, though advocates feel the country could be doing more.

The news stories and questions cut deep for young men like him, who were going to university and had plans for the future before war tore their lives apart and sent them halfway around the world, scrambling for survival. Abdurrahman had a middle-class life in Syria, as the son of a successful architect father in Aleppo. Salah's mother, Amal, was once a civil engineer, while her husband Ali was a real estate agent in Damascus, earning a comfortable living.

"It's not easy to go to another country," Abdurrahman said, melancholy in his voice. Abdurrahman juggles two jobs in the food business and is now looking for a third part-time job, while Salah, who works as a commercial painter, just picked up another gig putting up Christmas lights on houses. When I once asked Abdurrahman one afternoon for an interview, he replied hours later and apologized that he was at work but could call during his break, if it was not too late. It was 11:20 p.m. at night.

Both young men live with siblings suffering from debilitating health issues. Abdurrahman's sister, Asha, just had a kidney transplant. Salah's sister, Rand, is loved and cared for by family but can't walk or talk. They feel happy to be in Canada, and are just now slowly trying to pick up the pieces of a future that was shattered by conflict.

Salah dreams of studying video editing and went to Vancouver Film School to inquire, but balked at the tuition fee of $30,000. Abdurrahman had already had his university studies interrupted twice, and initially had hopes about enrolling in the University of British Columbia or Simon Fraser University. But he learned none his engineering training from abroad could be transferred for any credits in Vancouver.

"I learned it's not just about the language. It's everything, all if it. I have to do it all over again," Abdurrahman said, dejected. His situation is that of other educated young refugees, who struggle with their untapped potential as they hustle in part-time jobs to pay rent for their families.

"We have ideas. A lot of ideas. But we can't make it," he said. "If you want to make something in life, you have to be, like, totally free."

Salah, meanwhile, hopes 'Refugee at Sea' can help him get a foot in the door for video editing internships or training. Even though he can't afford Vancouver Film School, he's looking at other programs that might be more within his budget and schedule.

"You know the film Arrival? It's one of my favourite films," he said, referencing an intellectual sci-fi drama by Quebec director Denis Villeneuve, of Blade Runner 2049 fame. "It made people think differently about aliens, who were trying to help people [in the movie]."

Salah Chukair speaks about why he wants to make films and go into video editing in the future. Video by Jenny Uechi.

Despite the uncertainty he feels at times sometimes, Abdurrahman hopes his work will touch people in the West see refugees.

"I really hope a lot of people see it," he says enthusiastically, sitting at Farhan's chair and seeing how the video was edited on professional software.

The footage zooms into Abdurrahman's anguished face on the screen, against the background of water. In the movie version of the refugee's life, he makes it safely to shore. But he knows that in reality, thousands of lives are lost on the journey, their hopes and dreams drowned with them at sea.

On the drive back in his car, Abdurrahman contemplates the meaning of driving all the way out to North Vancouver from Coquitlam, to dream with his new friends about making movies even as his time was being stretched thin between work and family.

"The news just tells you, things like, '200 people are killed.' But every person has a story," he reflected. "I want to show stories that can change people's minds, from a bad way, to a very good way."