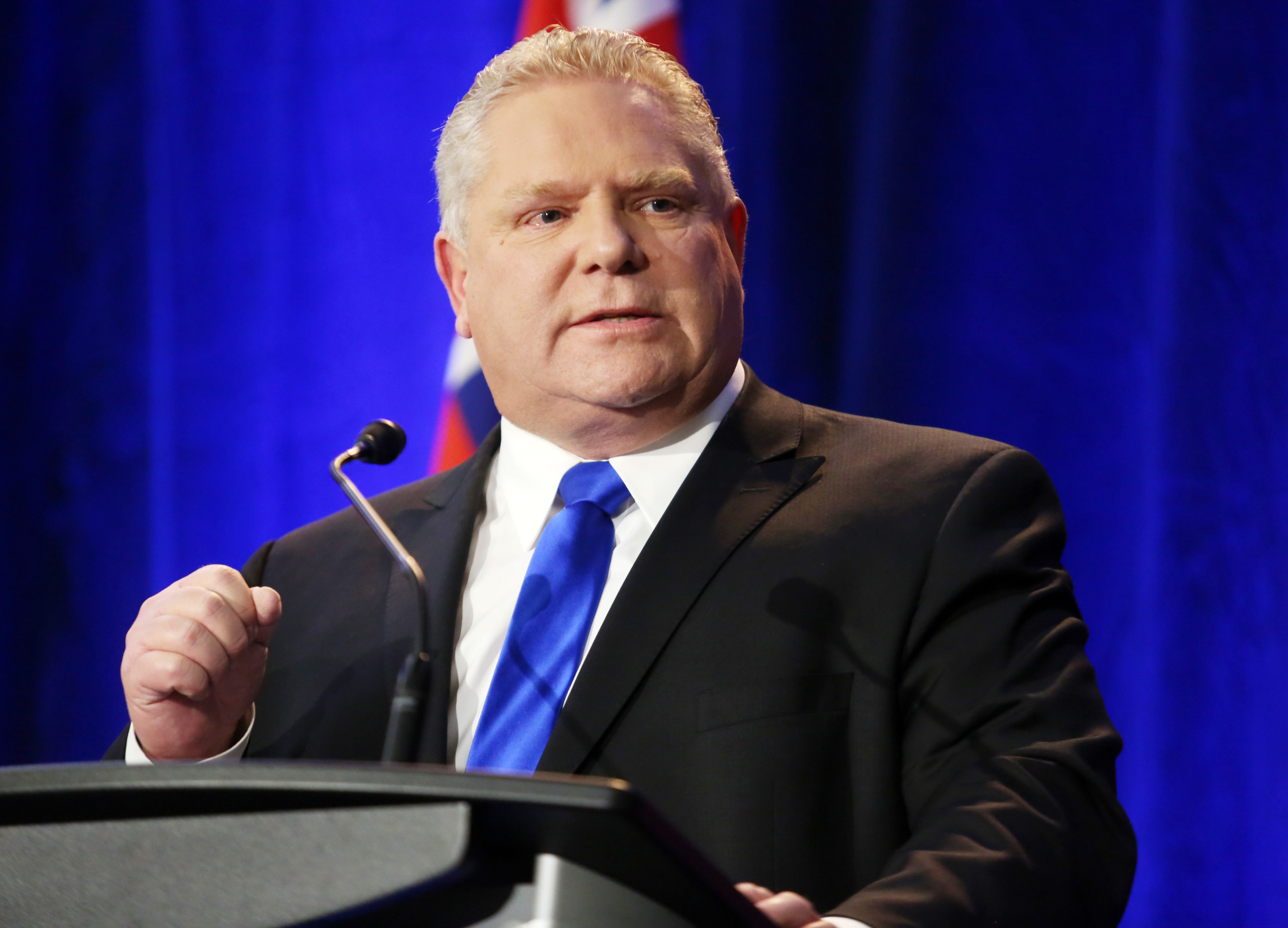 If elected premier of Ontario, new Progressive Conservative leader Doug Ford says he will get rid of the carbon cap-and-trade system and make sure millions of dollars stay in the province rather than heading for California or Quebec.

"This cap and trade, we’re giving $469 million to California of our hard-earned tax dollars. No one wants to do that, that’s a bunch of nonsense, we’re keeping that $469 million right here in Ontario," Ford told CTV News in Toronto in the days after he was named leader of the party.

He said the same thing to CBC morning radio hosts in Ottawa and Toronto. And to Ryan Doyle on Newstalk 1010, he said, "With the cap and trade, we’re giving $469 million of our money over to California and Quebec. Why? We’re going to keep that $469 million right here in Ontario, we’re going to invest it into transportation and roads."

The source of Ford's $469 million remains elusive, however.

'Doug Ford does not understand how our system works'

With cap and trade, companies whose greenhouse gas emissions fall below a set cap receive credits and companies that emit more can buy credits. This system puts a price on the carbon emissions that contribute to climate change, and uses a market mechanism to change how large companies behave. The companies with stronger environmental performance are generally rewarded in this system with the ability to sell credits on the market. To date, the allowance auction mechanism has netted the province about $2.3 billion.

Last year, Ontario joined a cap-and-trade market with California and Quebec. Its first auction was in February, and Ontario Environment Minister Chris Ballard announced recently that the province raised $471-million in the joint auction.

National Observer reached out to both the provincial government and Ford's campaign to explain his $469 million figure. Ford's team did not respond to multiple requests by press time.

Environment and Climate Change Minister Chris Ballard responded with a written statement that highlighted the green projects that the carbon market is legislated to invest in, including public transit and social housing retrofits, and a warning that abandoning a carbon tax "would result in cuts to billions of dollars worth of green initiatives."

"Fundamentally, Doug Ford does not understand how our system works," Ballard wrote. "Ontario does not use public dollars to purchase allowances. This is a market system involving transactions between private businesses. Businesses can choose to purchase carbon allowances in order to lower their overall greenhouse gas pollution. Remember, our system caps the greenhouse gas pollution that businesses can emit into the atmosphere. This cap will lower over time."

— With files from Carl Meyer

Cap and Trade- Sounds like pie in the sky. What measurement is used to determine if the industries are actually reducing emissions. I've not seen anything that supports the Cap and Trade tax we pay on just about every item purchased.

It suggests all the government is doing is collecting more taxes on top of taxes already in place.

It is a little pie in the sky

It is a little pie in the sky, in that there are concerns about reporting of emissions, and as we've seen, the idea of companies of one province purchasing credits from another jurisdiction in another country strike people the wrong way. (Despite the fact that we collectively take no issue when companies need to buy supplies from another country to build their products - thats just good business!)

What the government does collect in dues it notionally uses to fund green initiatives - for example, through a partnership with Enbridge, they will be investing $100M of that ~$470M in developing new sources of biomethane generation (or 'renewable' natural gas) from landfills, wastewater treatment sites, dairy farms, etc. This is an incredibly useful and necessary move. The carbon price is also designed to serve as an incentive to prioritize investment in methods to reduce emissions and provide relief from cap exposure. Though the price is not yet high enough to really do this - its more of a nuisance. The IEA reports that the price needs to be $140USD/tonne before you're going to see any changes in energy investment patterns away from fossil fuels.

But all money is fungible, so there is no guarantee that every penny will go to green initiatives. Personally, I believe a revenue neutral carbon price in the $100/tonne range would be the cleanest and easiest move. Prices of most things would be higher, but that would be offset by cuts in income/sales taxes - plus people could save money by changes in their behaviour and purchasing preferences that would reduce carbon price exposure.

Doug Ford should be

Doug Ford should be supporting cap and trade. After all, he is in favour for business solutions to business problems. He wants to use efficiencies to reduce greenhouse gas emissions. That's exactly what the cap and trade system intends to do, help companies to reduce their emissions: If they reduce their emissions by being more efficient, they save money; if they want to continue polluting, they have to pay.
Companies have never been very good at disciplined themselves when it comes to air or water pollution (e.g. Grassy narrows mercury pollution); that's why we have governments and regulations. If you leave companies to themselves, they won't do anything that can reduce their profits or money for their shareholders. Environment has never been their priority, and it's not Doug Ford priority.

It doesn't bode well for the

It doesn't bode well for the planet that a cap and trade system that most knowledgeable people say has to be higher to actually do the job the earth needs done, is becoming an election issue that might lead a flat earth know nothing to power. People are dying of heat in Karachi Pakistan....again, as they did in 2015. We have a heat wave in northern Alberta as I write...and wild fires across the north west have started in May....and promise to ramp up in the summer months ahead.

What is happening to human intelligence, that so many are considering voting for back to the future climate change deniers? Do they have no children?