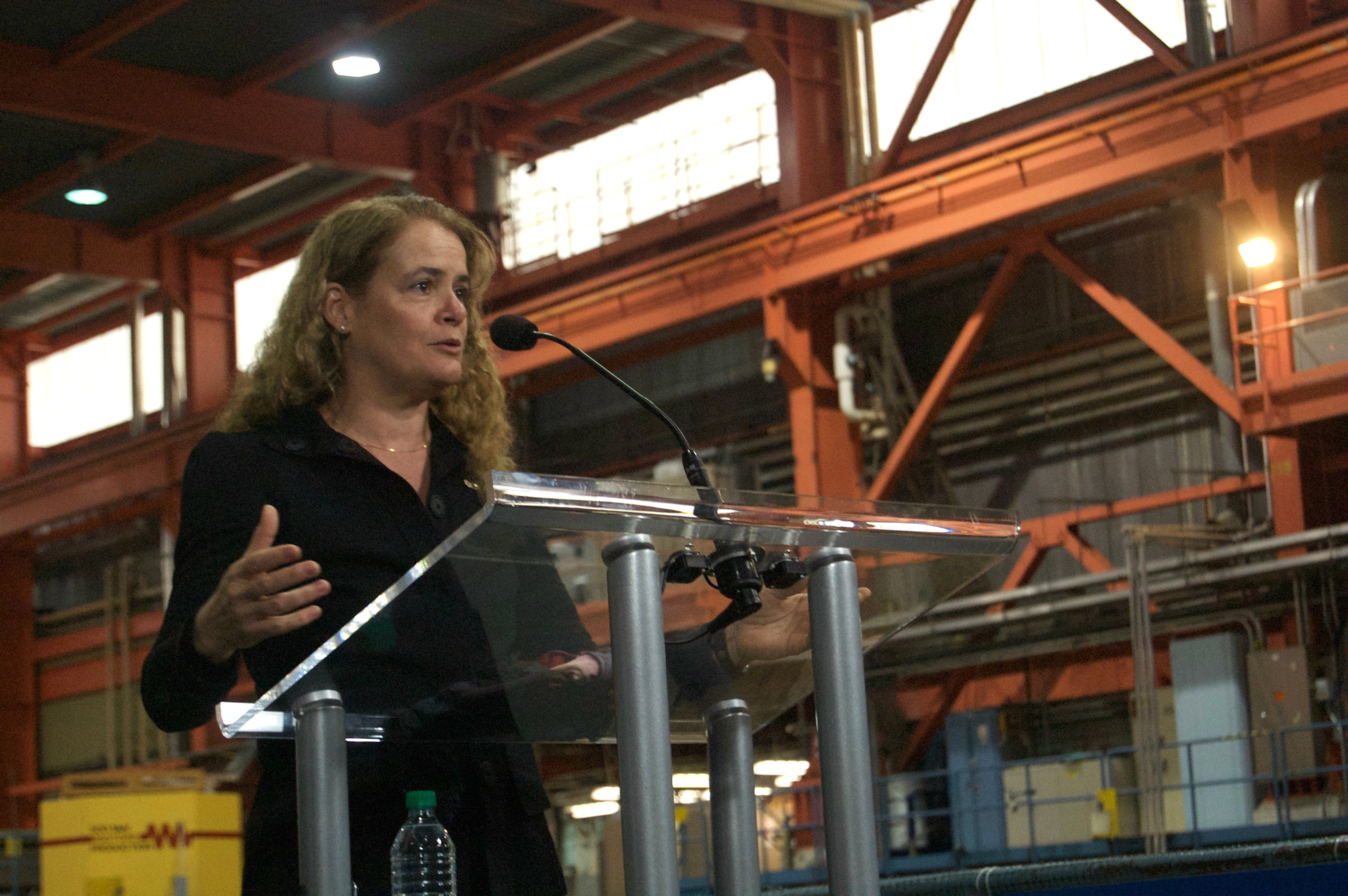 It is Governor General Julie Payette’s first official trip to British Columbia. Earlier this week, she met with provincial leaders and members of the Canadian Armed Forces on Vancouver Island. Payette continues her tour with an appearance at the Canadian Club of Vancouver this afternoon.

Speaking to staff at TRIUMF, a sprawling particle research facility at UBC owned by a consortium of Canadian universities, the former astronaut made the case for scientific discovery as integral to building a progressive society.

“En français, on dirait que je suis une fan finie; I am such a big fan,” Payette said. “You are at the very forefront of the frontier of knowledge. And yet, you are very practical and very applied, because you are solving problems that help people every day.”

TRIUMF’s claim to fame is an 250-square meter cyclotron, the largest in the world. By accelerating particles along a circular magnetic field, TRIUMF scientists conduct research on particle physics, nuclear physics, and materials science. One of TRIUMF’s most successful innovations was the production of isotopes that help precisely irradiate cancerous eye tumours without affecting the surrounding tissue.

Payette made her visit for TRIUMF’s 50th anniversary, which is being celebrated with a year of special events. Clad in a scarf printed with nebulae, the Governor General toured the facilities as employees lined up to shake hands. Despite criticism about previous unscripted events, the Governor General again chose to make her bilingual remarks without notes.

“Fifty years is very few. Actually, it’s only been 50 years since the start of space exploration. Unfortunately, in those 50 years we have the feeling that we’ve learned everything, that we know everything, when we know well that in 5,000 years we will look back on what we did here and now, in 2018, and laugh,” Payette said. “There is still so much to discover, so much to do.”

Recalling what compelled her to go to space in the first place, she cast scientific discovery as part of human nature.

“After my first spaceflight, there was often the question, ‘why?’” Payette said. “Any progressive society, any society that wants to grow and to do great things for people on the ground, has to leave a little time for discovery, for exploration, for research, for searching, for asking yourself, ‘What next?’... This is a fundamental characteristic of human beings.”

Eric Guetre, a project engineer at TRIUMF, showed the Governor General around ARIEL, a new facility that delivers unprecedented intensities of isotope beams. While the cyclotron has been doing a workmanlike job for 50 years, the new technology in ARIEL could triple TRIUMF’s research capacity.

-- with files from Ed Ngai and Dylan Waisman

What's wrong with the

What's wrong with the spontaneity of "unscripted remarks"?
Maybe it shows she's smart and not a Party puppet?

Thanks for commenting, Public

Thanks for commenting, Public Interest. I don't think it's intended to be a criticism against spontaneity in the article.