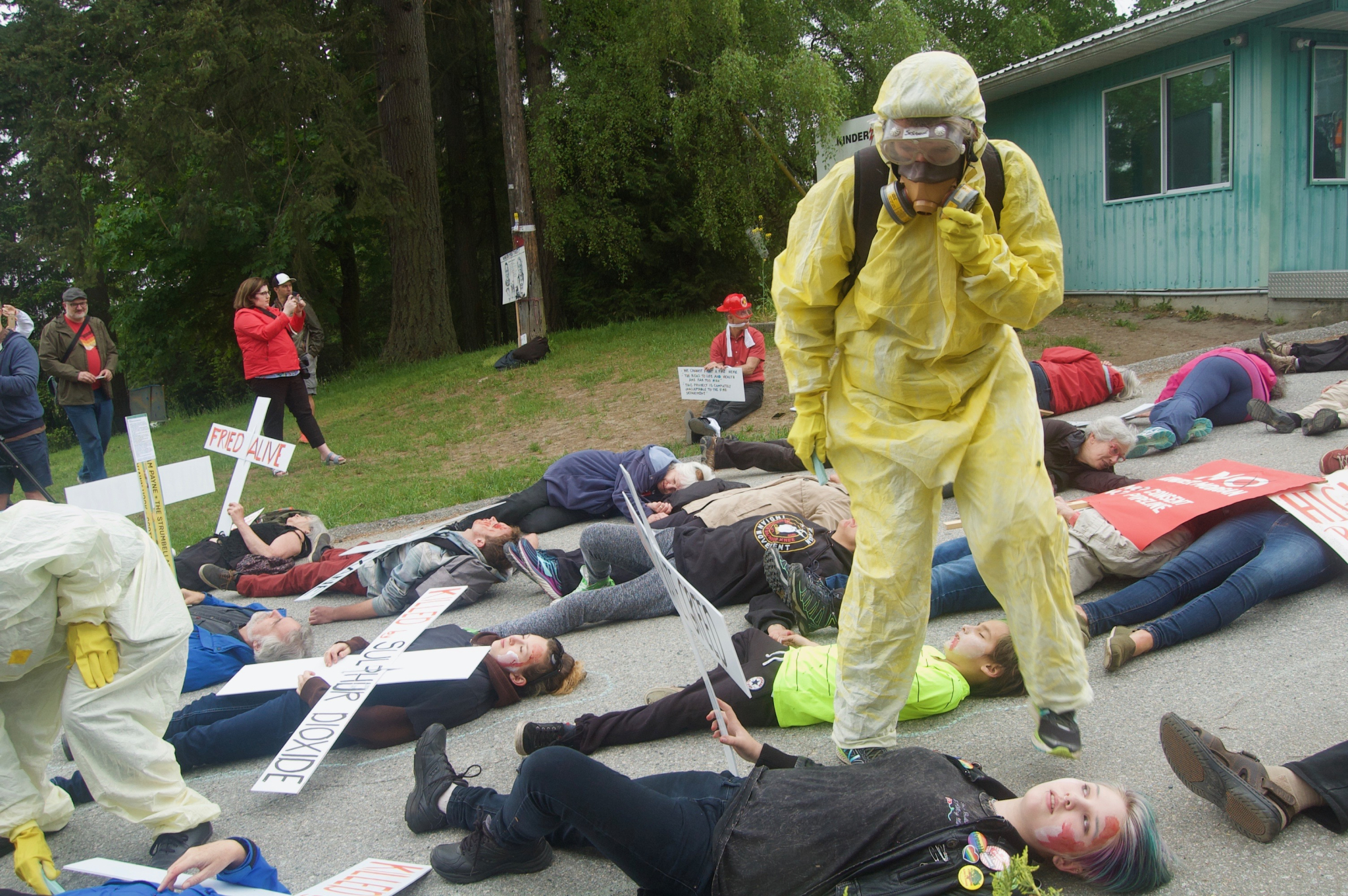 Activists participate in a "die-in" at the gates of Kinder Morgan on Burnaby Mountain in British Columbia on Wednesday, May 16, 2018. Photo by Dylan Sunshine Waisman
Previous story
Next story

Covered in fake blood, dozens of people staged a "die-in" at the gates of a Kinder Morgan pipeline terminal on Burnaby Mountain on Wednesday.

The "die-in" was meant to dramatize death by fire and chemicals in the event of an emergency at oil tank storage facilities. The protest took place just hours after Finance Minister Bill Morneau announced in Ottawa that Canada would protect Kinder Morgan from any financial losses resulting from British Columbia Premier Horgan's attempts to delay or obstruct Kinder Morgan's existing Trans Mountain pipeline from Alberta to metro Vancouver.

About 60 people took part in the protest aimed at raising awareness about the risks of fire at the company's tank farm on Burnaby Mountain. Half of the protesters pretended to die. Some carried fake gravestones listing various chemicals, fire and smoke as their causes of death. Some were carried away one at a time by people costumed in hazmat suits.

The event was organized in part by BROKE, Burnaby Residents Opposed to Kinder Morgan Expansion, who say the planned expansion of the tank farm increases the risk of a disaster in their neighbourhood. While other protests have focused on Indigenous sovereignty and the environment, the "die-in" highlighted the close proximity of an elementary school, about 300 metres away, and apartment buildings and houses even nearer to the tanks.

'The risk to life and health are far too high'

Stephanie von Dehn, a physician and member of the Canadian Association of Physicians for the Environment, was among those arrested.

“I’m aware that we’re upgrading schools, making them earthquake proof, but we haven’t addressed the biggest risk of all, which is this huge explosive fossil fuel depot here," she told National Observer.

“Part of my job as a physician is to do prevention and to warn people about what’s dangerous for their health,” she said.

She carried a sign that read, “We cannot fight a fire here. The risk to life and health are far too high. This project is completely unacceptable to the fire department.”

Protesters covered in fake blood and carrying gravestones were carried away by people costumed in hazmat suits, to bring awareness to the risks of a potential tank farm fire on Burnaby Mountain. #kindermorgan #pipeline #cdnpoli

Area residents have long raised concerns about the tank farm location; a 2015 report from the Burnaby Fire Department warned that the expansion would pose “uncontrollable and unacceptable safety risks to the City of Burnaby.”

Kinder Morgan's proposed pipeline expansion would triple the capacity of its existing Trans Mountain pipeline to 890,000 barrels of oil per day. Although the project has the strong backing of Ottawa and Alberta, it has sparked significant opposition in British Columbia. Premier Horgan has pledged to use all legal tools available to block construction and the project is also facing legal challenges from the cities of Vancouver and Burnaby, as well as six B.C. First Nations.

Four people were arrested at the die-in, joining over 200 who have been arrested since March 10 while protesting the project, among them Kennedy Stewart, the New Democratic Party MP for Burnaby South and Vancouver mayoral candidate, as well as Green Party Leader Elizabeth May.

Proponents of the project say it will boost the economy and bring millions in tax revenue, while opponents say it will create too much risk to B.C.'s coast and pushes Canada's climate goals out of reach.

Protesters arrested for violating a court injunction face criminal contempt of court charges, and the cost for pleading guilty is $500 or 25 hours of community service, overseen by a probation officer. 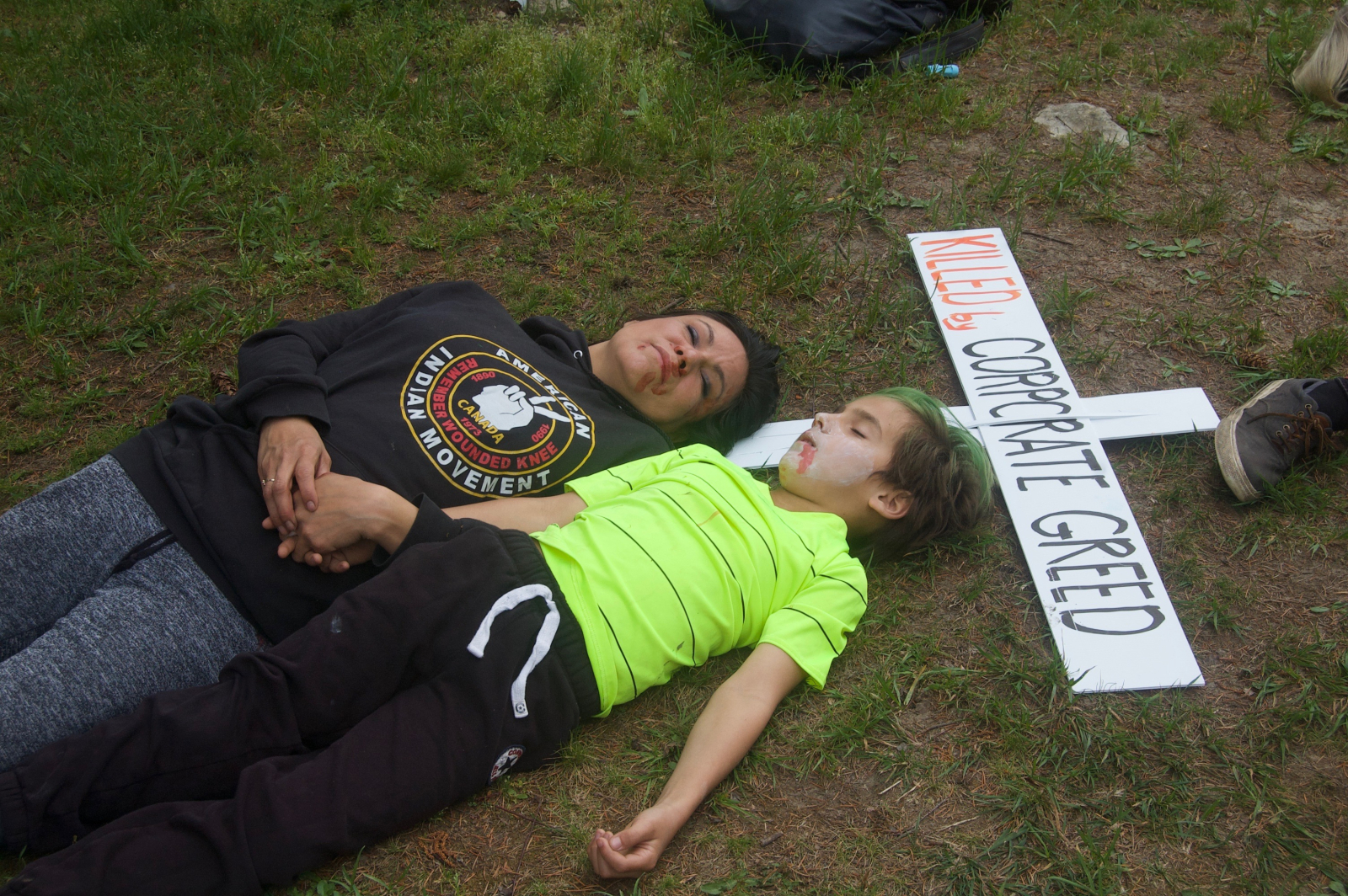 Anna Gerrard, another arrestee, refused to walk with RCMP to the processing tent and was instead carried on a stretcher, despite officers’ best attempts to convince her that it would be “embarrassing” for her and that the court wouldn’t “look favourably” on her behaviour.

She told National Observer her protest was in support of Indigenous rights.

“Our country is talking a lot of lip service about nation-to-nation reconciliation, but we really need to show them that we’re ready for them to put that into practice,” she said. An Indigenous elder approached Gerrard and handed her a burning sage as she spoke about how Canada needs not only a transition, but a transformation in its relationship to the land.

“This pipeline is just a symptom of a mentality whose time has come to an end,” she said.