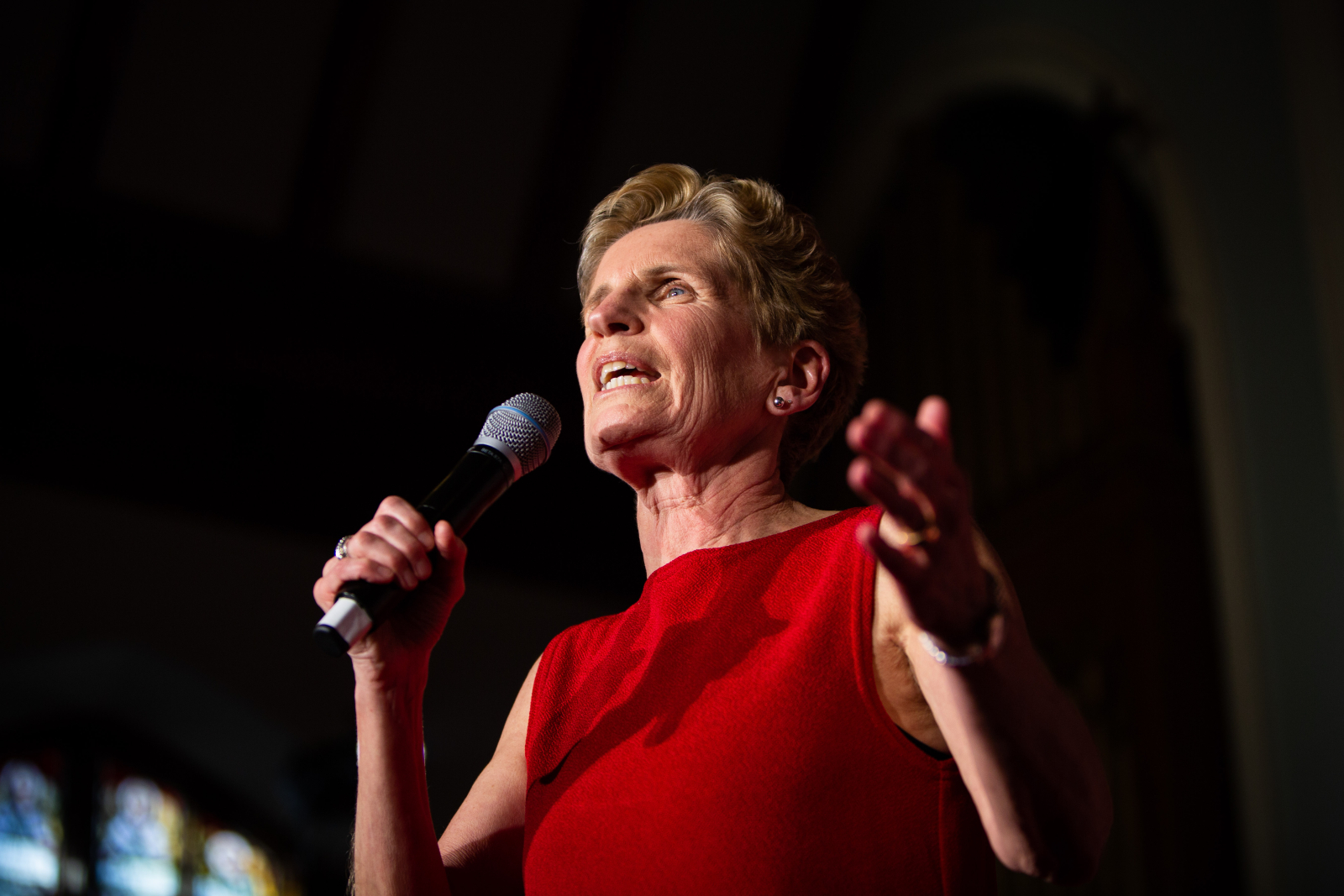 Facing a barrage of poor polling numbers for her Ontario Liberals, a subdued Kathleen Wynne said on Friday she would keep doing what she can to push her party's accomplishments in government.

Recent surveys suggest Wynne's Liberals trail both the Progressive Conservatives under Doug Ford and a surging New Democratic Party under Andrea Horwath, who polls now suggest has jumped into the top spot in voter preferences ahead of the province's June 7th election.

"Am I going to give up? Absolutely not," Wynne said at a campaign stop on Toronto's waterfront. "This is way too important that we continue to talk at the doors across this province about what we have done and what we can do going forward."

Her government has helped ensure strong business, a strong economy and a fairer society — accomplishments too important to abandon, Wynne said.

For her part, a campaigning Horwath said people are becoming excited by the fact they don't have to settle for either of the two parties that have led the province since 1995, when voters tossed out the governing New Democrats under Bob Rae in favour of the Progressive Conservatives under Mike Harris, who was in turn shown the door in 2003 by the Dalton McGuinty Liberals.

"This campaign is about change for the better, it's about a future in Ontario where people can start building a better life again," Horwath said at a stop in east-end Toronto. "People feel like there's something exciting that can happen in our province, that we don't have to settle for the same thing we've settled for the last two and a half decades."

The NDP's rise in the polls has also brought added scrutiny. On Friday, the Tories alleged an NDP candidate in east Toronto — Tasleem Riaz — had made offensive comments online, including a post from 2013 quoting Adolf Hitler.

Riaz was quick to issue a statement saying she was "horrified" the post had appeared on her Facebook page, stressing that she did not understand how it had happened and would never have shared it intentionally. Asked about the allegations, Horwath highlighted Riaz's years of work as an interfaith advocate.

"I'm looking into this particular issue but it certainly doesn't match with what I know about Tasleem and her history of activism," Horwath said as she touted party plans to invest $1.6-billion a year for 10 years for school repairs.

Ford, who only recently took over the party after his predecessor Patrick Brown resigned amid allegations of sexual misconduct, said he paid no attention to polls — which had for the longest time suggested the election was his to lose.

"Am I going to give up? Absolutely not." #Wynne #ONelxn #ONpoli

However, the most recent polls suggest the party has begun slipping — falling behind the NDP.

"People want change (but) they don't want an NDP government," Ford said in Toronto. "For 15 years, the Liberals have been partying with the taxpayers' money and the NDP wants to keep the party going, just with a different tune."

Horwath and Ford both planned relatively light campaign days Friday, while Wynne, who had planned a more frantic pace, shortened her day in light of Thursday evening's bombing of a restaurant in Mississauga, Ont., that left three people seriously hurt. Wynne called the attack a horrific crime.

— with files from Paola Loriggio and Peter Goffin.

Ontario Liberals, NDP say it's too early to talk about forming a coalition