Awakening the rich history of Islam in Europe 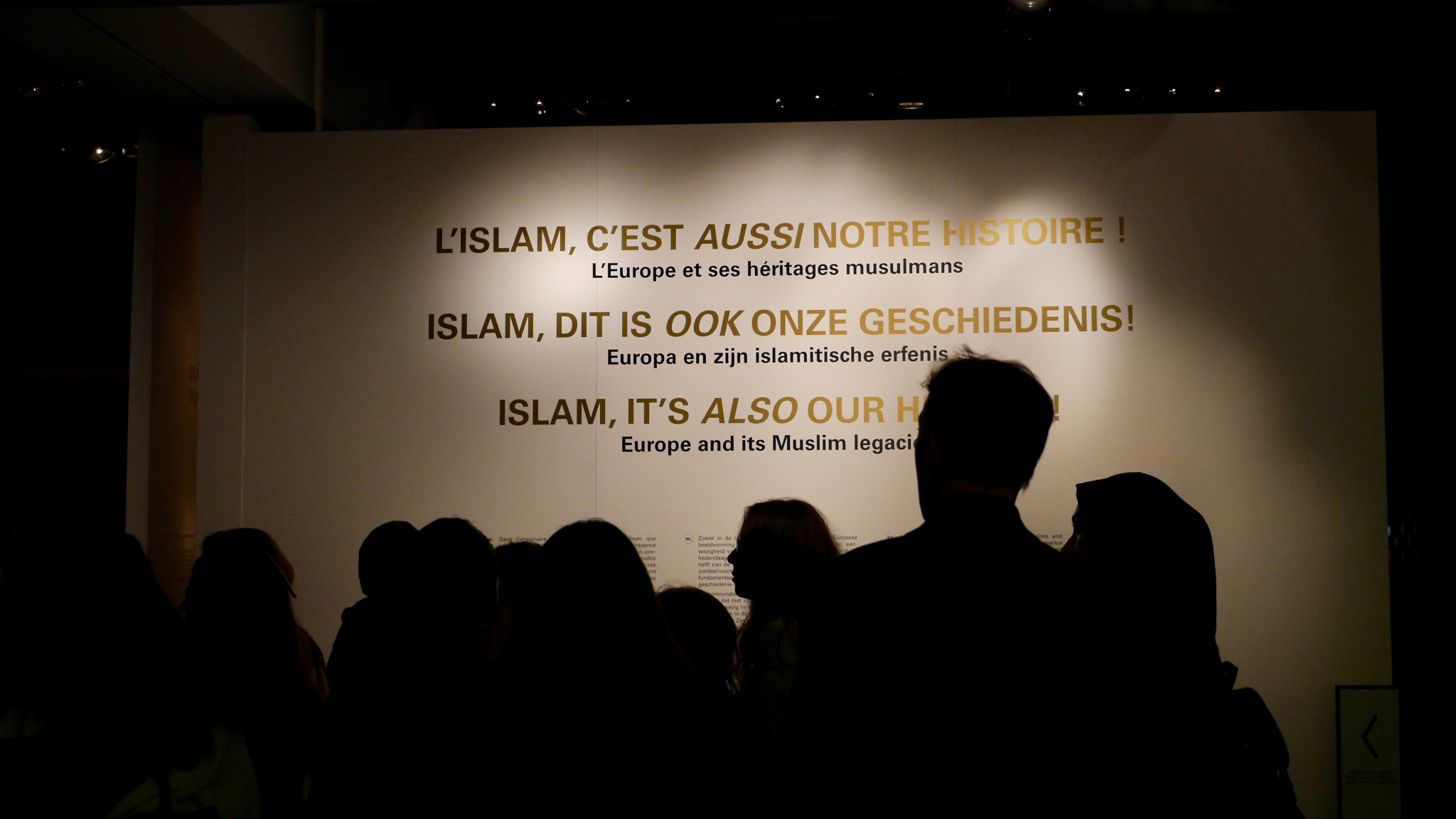 A group of students visit an exhibition on Muslim heritage in Brussels, Belgium on Dec. 15, 2017. Photo by Clothilde Goujard
Previous story

“Islam, it's also our history.”

This bold statement, challenging the perception of Muslims as outsiders in Europe, is the title of an exhibit that attracted tens of thousands of visitors this year.

Shown first in Sarajevo, then Brussels and several cities in Bulgaria where it wrapped up earlier this summer, the travelling exhibit covered 12 centuries of Muslim history in Europe. It also offered visitors a stream of facts and evidence that serve as a counterpoint to the fears and false information flooding politics across the continent and around the world over the past few years.

While the display stretched back to the Middle Ages, it also featured some recent events.

One section, for example, showcased a European Union flag on an emergency blanket used to warm asylum seekers who recently crossed the Mediterranean Sea.

Henri Dupuis, one of the curators, said this is something that represented “the EU’s inability to deal with the migration crisis.”

The exhibitors aimed to challenge the belief that Muslims emigrated to Europe only recently, he added. They highlighted many exchanges between Christian-European and Muslim-Arab powers over time and an undeniable Muslim presence in some parts of Europe since the Middle Ages.

“Our goal in our exhibition is really to create emotions and spark an awakening,” Dupuis said in an interview with National Observer in Brussels, Belgium.

“There’s a common history [between] Europe and the Muslim world. The exhibition about Muslim heritage in Europe is to say that Muslim presence didn’t start today — that's what we wanted to show."

The exhibit was created by Tempora, a Belgian cultural company, and the Museum of European History. Nearly 60,000 visitors, including 20,000 students, visited the exhibit in Brussels, capital of the European Union.

“There’s a common history to Europe and the Muslim world,” said Henri Dupuis, a curator of a ground-breaking artistic exhibit. By @clogouj in @NatObserver

Organizers began to develop the exhibit in 2012, but struggled to raise the funds needed to proceed. Five years later, they finally managed to secure funding, opening in 2017 as Europe was strained by a flood of asylum seekers.

The migration crisis peaked in 2015 when more than a million asylum seekers, mostly from Syria, Iraq and Afghanistan, crossed into Europe through the Mediterranean Sea. Terrorist attacks in Paris, Brussels and Berlin contributed to growing unease, as did rhetorical and physical attacks against Muslims — both European citizens and migrants — according to an annual report on the state of Islamophobia in Europe led by 30 European scholars, and an annual report by Human Rights Watch.

An annual Pew survey found that 43 per cent of Europeans held unfavourable views of Muslims in 2016. Unfavourable opinions had increased in most countries since the migration surge: by nine per cent in the United Kingdom, eight per cent in Spain and Italy and 12 per cent in Greece. The survey of 11,494 respondents in 10 EU countries was conducted in April and May of 2016.

Presenting Muslims as a threat

While Muslims comprise only five per cent of Europe's population, populist political parties have been using rhetoric based on identity and culture to present them as a threat to a historically Christian Europe.

Hungarian Prime Minister Viktor Orbán promotes a controversial anti-migration agenda rooted in strong cultural and religious beliefs across Europe and has called for an anti-migrant alliance to ban arrivals of new migrants at Hungary and the European Union's external border.

"Christianity is Europe's last hope," Orbán told an audience in Budapest in February, ahead of elections he won, adding that with mass immigration "our worst nightmares can come true. The West falls as it fails to see Europe being overrun."

In December, 2017, the European Union announced its decision to sue Hungary, Poland, and the Czech Republic for not respecting their quotas of refugee resettlement under European Union rules. Orban defended his refusal to honour the quota, telling the German daily Bild newspaper, "We don't see these people as Muslim refugees. We see them as Muslim invaders."

Muslims in Europe through the Middle Ages

The exhibit received a warm welcome from Belgian media for its activism and bravery in today's political climate according to newspaper Le Soir. Journalists from the newspaper visited the exhibit with young Muslim Belgians who said they were surprised to learn that not just "Romans and Greeks" had been part of Europe's history.

The exhibit was divided into three historical periods, showcased in three sets of rooms.

The first room displayed books and old chess games, along with lists of English, French and Dutch words containing Arabic roots. It also featured pictures and biographies of Muslim, Christian and Jewish scientists and philosophers.

Together, this set showcased a Muslim presence in Europe from the period 711 B.C. to 1492, when Muslim kingdoms, including the Umayyad Caliphate (in modern-day Syria), ruled the Iberian Peninsula (modern-day Spain and Portugal).

“People of different faiths lived together,” said Dupuis. “At times, it was more conflictual between kingdoms.”

In the next set of rooms, 14th-century weapons used during the Ottoman Empire's conquest of the Balkans were featured, along with the first Arabic texts printed in Europe. More peaceful elements introduced by the Ottomans to Europe, such as coffee and tulips, were displayed along with photos of the empire's architectural legacy. The city of Sarajevo in Bosnia and Herzegovina was founded by the Ottoman Empire.

The Ottoman Empire collapsed during the First World War, leading other nations to reclaim power over the territories it once held.

The third set of rooms covered more recent history, showcasing colonial influences from the time European powers occupied territories in the Arab world with Muslim majorities starting in the 19th century. It also addressed the first waves of Muslim immigration to Europe after the Second World War, part of the effort to rebuild a battered continent.

“Our goal is not to emit a judgment about history, it is not our role,” said Dupuis. “We show people what happened in history with as much scientific rigour as possible.”

Contemporary issues around immigration and refugees

On another floor, curators decided to address contemporary issues, given the current climate of tension around migration and Muslims.

“We are historians, so we are used to looking toward the past, and we are not politicians either,” said Dupuis. “We could have stopped at the end of colonial times and the first waves of immigration but we thought there were events happening today…so we approached them, but essentially through art.”

Muslim and non-Muslim artists expressed their views on current events and politics through photos, videos, installations, sculptures and paintings focusing mostly on immigration and refugees.

“A lot of (school) groups came to visit because it’s a sensitive topic,” said Dupuis. “It’s also very interesting because it’s a part of our past that until now we talked so little about.”

He said it was a positive experience for European students of Muslim faith who could see their part in Europe’s long history.

Curators also set up a café for discussion at the end of the exhibit on topics including the experiences of Muslim youth in modern Europe, growing old as Muslim in Europe, and interfaith couples.

“Because of the current circumstances and because of the terror attacks we’ve had, the exhibition created a sort of crystallization of meetings and debates between different communities, and that, obviously is a very positive point,” said Dupuis.

It is regrettable that even

It is regrettable that even in the history of peaceful relations between the Muslim and Christian (perhaps now better characterized as the western or euro-centric world) there are sporadic outbreaks of conflict such as the "Christian" crusades, the depredations/enslavements by the "Barbary pirates" against non Muslim shipping and commerce in the Mediterranean and along the western African coast. Almost all the conflicts were driven mostly by crass mercantile interests, sometimes thinly veiled under the cloak of religious power struggles. That dynamic continues to the present time. Western economic dominance is perceived as exploitative colonialism (with some justification) and the love/hate relationship as exemplified by the Saudi Royal Family is largely driven by both economic and cultural fears on the part of the Muslim world.
It is a dynamic that is equally strong between the west and Russia and China. There is a certain inevitability about the friction between these four major "tectonic", economic/cultural sectors Until these power blocs can find some accomodations on influence, economic sovereignty/expansion and/or cooperation there will continue to be needless bloodshed and violent conflict. It is equally regrettable that imperialistic multinational corporations both fuel and take advantage of conflict, and, where they are state sponsored enterprises, are acting in service to the hegemonic impulses of their political leadership.

Thank you for your comment! It is well worth to be read widely.