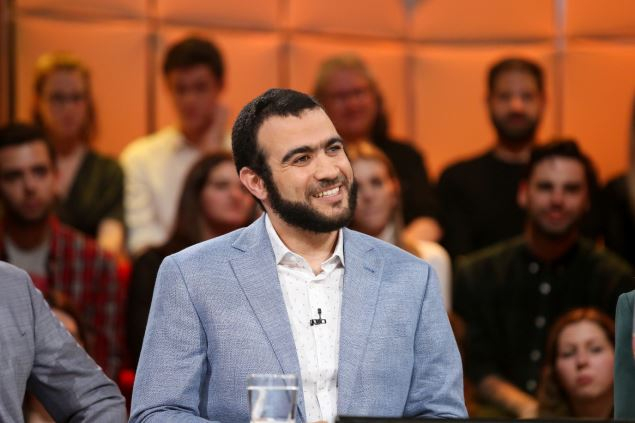 Canada’s most popular television show’s Twitter account was suspended some time in the early morning of Friday, May 24. While most English Canadians might not know it, Radio-Canada’s Tout le monde en parle has more than one million regular viewers every Sunday night.

Twitter user Timothée Forest (@TimRForest) posted the notice he received from Twitter while bragging in French that he reported TLMEP’s account for “apologizing for terrorism” by featuring an interview with Omar Khadr.

On April 21, TLMEP had Omar Khadr for an interview that was challenging and critical. Lepage didn’t shy away from difficult questions, including asking Khadr to react to footage of a young Khadr crying as he was being interrogated in his role of the death of U.S. army combat medic Christopher Speer. Khadr smiled. He was graceful, humble and explained how he endured his many years in detention at Guantanamo Bay, including two years in solidarity confinement, and how it impacted him.

The reaction from the far-right was swift. Far-right media personality Ezra Levant accused Radio-Canada of insulting Quebecers for choosing to air the interview on Easter Sunday. Hundreds of far-right trolls flooded my own feed when I shared the interview with a positive tweet.

The pressure that they exerted to report TLMEP was enough to convince the social media platform to temporarily suspend TLMEP’s account. Even if Twitter ultimately decided it was an error, it’s a sound victory for the trolls and a deeply distressing example of the limits of free speech on a private social network that is easily manipulated by the far-right.

The far-right has been extremely successful in how it has attacked the speech of organizations and individuals that it doesn’t like. When I posted about this interview, my twitter feed became unusable. I couldn’t log in without being confronted by a non-stop flow of insults and harassment. Several accounts sent me photos of severed hands and other gruesome images. Many repeated lies about what we know about Khadr — something that, while is less odious than the harassment, makes those of us who care about facts even more enraged.

If TLMEP can be suspended over a tweet that simply promoted an interview that many far-right tolls disagreed with, the implications for those of us who have opinions that challenge right-wing rhetoric are enormous. Progressive Twitter users are being shut down more and more for comments that are objectively not harassment or problematic. It seems that if enough people report a tweet, it’s enough to land you in Twitter jail.

Matt Sears, classics professor at the University of New Brunswick and popular Twitterer was suspended for 24 hours by Twitter on May 3 for saying that white nationalists need to be called out and made uncomfortable wherever they go. Popular anti-colonial Twitter user @AgentNDN has been suspended, seemingly indefinitely. Details about what caused the suspension aren’t public, but the account uses irony and mocking to highlight and identify colonial abuses and hypocrisy, and raise the voices of other Indigenous Twitter users.

"If TLMEP can be suspended over a tweet that simply promoted an interview that many far-right tolls disagreed with, the implications for those of us who have opinions that challenge right-wing rhetoric are enormous" - @NoLore

It’s a wild inconvenience for a company to lose a Twitter account for a few hours or days because of coordinated and targeted right-wing harassment. But for those of us who rely on the platform to share our work, make connections and break the isolation of working alone, losing access to our Twitter accounts can be far more threatening to our livelihoods. We’re tethered to a website who is more interested in allowing the proliferation of vicious right-wing trolls than it is to protecting those of us who the trolls target.

And worse, the trolls know that they can win this game.

TLMEP was doing journalism; they posed extremely basic, straightforward questions to a notable Canadian. Indeed, the question of Khadr’s role in the death of Speers has never been settled, really. Fellow National Observer columnist Sandy Garossino examined the facts of Khadr’s case in a must-read 2017 column. But the facts don’t matter when activists and politicians alike use Khadr’s case to silence their enemies.

If Twitter could be led to believe that this violates its code of conduct, the days for those of us who consistently challenge power and ask difficult questions, are certainly numbered. We can decide to either take the risk and hope we aren’t suspended, or self-censor to remain part of the social media’s community. Neither option is very good, but those are the decisions we have to make when the promise of free speech on a platform like Twitter is actually an illusion.

Nora- We need your voice and

Nora- We need your voice and the voice of other independent thinkers now more than ever.

There is credible evidence

There is credible evidence that Omar Khadr was very likely made a scapegoat for the killing of a U.S. soldier falsely categorized as a "medic" who in fact might have died from "friendly fire". In any case, even if he was the killer, the U.S., aided and abetted by Canada, was guilty of multiple violations of its own and international laws in corruptly convicting him of a criminal act in what was an egregious travesty of justice.

If you know anything about

If you know anything about human history you will know that "free speech" has always been an illusion and those who do not care for the "free speech" of their era have regularly resorted to defacing things "carved in stone"; to burning manuscripts, libraries, all written, printed, painted, artifacts in the obliteration of the very existence of disfavoured people, regimes, civilisations. Tongues have been severed to silence the actual voices, hands cut off to prevent writing. Atrocities abound in human history in the attempt to erase heretical beliefs.

The control of information is the first step in the war against truth. This has been universal since we crawled out of the trees. Even in the animal kingdom, some species rely on misinformation to confuse/escape predators.

The far-right is not alone in its drive to ultimate power. It is merely engaging in the ancient strategies of life on earth - now gleefully amplified by the befuddled entrepreneurs of the unsocial media. Their approach to integrity and truth is governed by corporate profits above all.

A legal analysis of an

A legal analysis of an important twitter legal challenge. "The attorneys for Ms. Murphy have made a very interesting case. The suit avoids many of the pitfalls prior suits against social media platforms have fallen into. Policy makers and technology policy analysts should follow this case closely to see what evidence the plaintiff may discover and what legal standards may emerge from the California courts." https://www.alec.org/article/a-legal-analysis-of-murphy-v-twitter/?fbcli...