'When you're in green politics, you've got to have confidence': MEP Gina Dowding on Europe's green wave 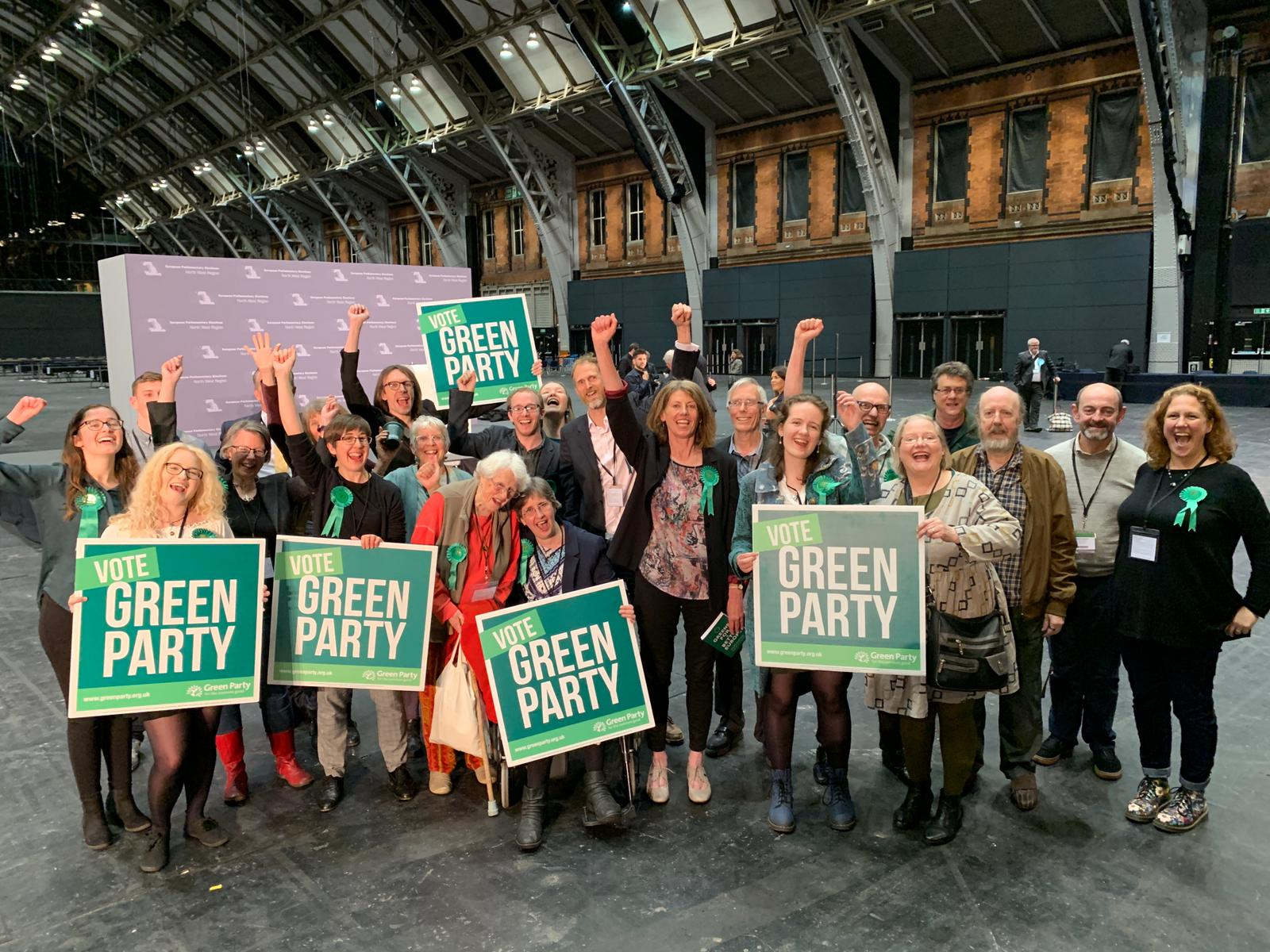 Gina Dowding and her team celebrate her election to the European Parliament in Manchester May 27, 2019. Photo by Louis Harrison Dowding
Previous story
Next story

Two years ago, Gina Dowding was arrested and charged after locking herself to pipes and obstructing a road to protest fracking in northwest England. When she was handed a criminal record later that year, she wondered if it might blight her employment opportunities if she ever left local politics.

The incident has not hurt her career to date. On May 27, she was elected to European Parliament with the European Green Party. She is one of more than 70 politicians who rode the dramatic "green wave," which swept through the elections.

Dowding is also in an unprecedented situation where she may only serve four full months in her role as member of European Parliament, given Britain's impending departure from the European Union on Oct. 31. The same fate faces her six other victorious Green Party colleagues from England and all 73 of the U.K.'s elected members of European Parliament (MEPs).

“Obviously, [the Green MEPs from England] want to be there for the full five years, and we are really going to work all-out for the U.K. to stay in the EU, because it's in our blood. We know and believe that the EU is a force for good, with scope for improvement of course,” Dowding told National Observer in a telephone interview from a north London train station. She had just stepped off the train from Brussels, where she had mixed with other victorious Green Party candidates from across Europe, and was on her way home to Lancashire in northwest England.

"Now that we have more Greens in parliament, its more likely that we will see leadership on action for the climate, leadership on air pollution and plastic pollution, the Green New Deal creating jobs where we need them, and regulation that brings companies that have not been adopting best practices forced on a level playing field with those industry leaders who want to be tackling these issues," she said.

Dowding and her colleagues will not be lobbying for a reversal of Brexit in Brussels — that is far from the remit of European parliamentarians, especially at this late stage in the tortured Brexit process. But they have a role as envoys of the European legislature back home, she said. “If we get some (environmental) results and communicate to people that they actually affect people's lives and make them better, it shows that the EU is a force for good.”

For the first time in history, the European Green party, comprised of 30 national parties, is in a strong position to push a green agenda in the European Parliament. It won more seats than ever before, coming second in Germany with 20 per cent of the vote, third in France with 13 per cent of the vote and fourth in the U.K. with 12 per cent, beating the governing Conservatives.

A longtime anti-fracking champion, Dowding hopes to work with her fellow Greens to push an European-wide energy policy that bans government subsidies for fossil fuels.

The 56-year-old politician has lived most of her adult life in Lancashire in northwest England, the county that was the birthplace of the industrial revolution and once produced more than half of the world's cotton. The cotton factories shuttered long ago but the British government has spied another business opportunity for the area: shale gas extraction.

Dowding's politics have been galvanized by the fight against fracking in her local area, the process of drilling into the earth and injecting a high-pressure water mixture to release trapped gas. "It's the equivalent of the Canadian tarsands," she said. "It's a new fossil fuel industry trying to set up in the U.K.. It will lock us into gas when we need to be moving away from gas and coal (...) It poses real risks to water supply, the soil, the farming industry and tourism. Lancashire relies on tourism. Why would people want to come to the biggest gas field in Europe for tourism?"

In July 2017, Dowding, then a local councillor, was arrested and given a criminal record for participating in a 10-hour protest that obstructed the highway outside a fracking exploration site in her constituency. She and 12 others locked themselves onto pipes and barrels near the entrance of the site, preventing staff and vehicles from entering.

Her experience reflects actions taken by politicians in other countries, including Canada, where former NDP MP Kennedy Stewart and Green Party Leader Elizabeth May were both arrested for defying a court injunction at a terminal for the proposed Trans Mountain pipeline expansion project. Stewart and May were later fined for their actions.

Stewart later resigned from his federal seat and went on to win Vancouver's mayoral election.

Dowding said that resorting to direct action was not an easy decision for her as a politician. "It's not something you want to be doing all the time because a lot of the public don't trust people who lay down on the street," she said. But all other democratic options to prevent the drilling had been exhausted; the local council's decision to reject the exploration company's application to test drill at the site had been overturned by the government.

“As an elected politician, part of the reason you (resort to direct action) is because you're able to get the profile, raise the concern and explain to people why this is so important. Because so many people just trust that the government has their best interests at heart, and that they might not actually be prioritizing industry profit or tax revenues from production," Dowding said. “I come from a family where that was the case: my parents would have implicitly and explicitly trusted that the government were doing the right thing at all times."

According to Dowding, the European Greens have a distinct advantage over the other hybrid party groups in Parliament, because they have consensus. The national parties campaigned on a joint European Green Manifesto, which includes pledges like divesting from fossil fuels and coal (which still produces 20 per cent of Europe’s energy), reducing emissions by 55 per cent by 2030, and ensuring 100 per cent renewable energy use by 2050. The Greens will not face the same level of “internal tussle” to streamline political perspectives and ideas, she said.

In total, the Greens/EFA group, an amalgamation of the European Greens and a sprinkling of candidates from progressive groups like the Swedish and German Pirate parties and the Scottish National Party, have 71 seats of the 751 legislature, making them the fourth biggest bloc.

71 seats for the Greens. Best result ever. Thank you voters!!! https://t.co/QhyNwfXi0Y

That gives the Greens significant clout with Parliament’s long-ruling but now shrivelled centre-right and centre-left blocs, namely the European People’s Party (EPP) and the Progressive Alliance of Socialists and Democrats (S&D). Also alliances of different parties from member states, they have dominated the EU Parliament since its inception in 1979. They lost their joint majority this month. They will now be courting the Greens to get the majority they need to push legislation and trump Parliament’s far-right voices, which also made significant gains in the election.

Centre-right EPP leader Manfred Weber said Monday that the Greens were now “a possible partner. We should sit down together and draft a mandate for the next five years.” The EPP won the most seats in parliament, and needs to solidify a majority with other groups in order to push for Weber to become a solid contender for Commission president — the head of the EU's executive branch and one of the most powerful positions in the EU.

Monica Frassoni, co-chair of the European Greens, told National Observer in an interview that her party was "in the middle of discussions with pro-European groups" but that nothing was a given at this stage when it comes to endorsing a candidate for Commission president.

"What we are trying to do is to see whether in the discussion on the future president of the commission, and on the program and on the conditions to have an agreement (whether) we can put forward and obtain certain issues concerning climate change — concerning ambitious legislation on targets that are now much more comprehensible for public opinion than before and demonstrate they have support," she said. Even if they do sign an agreement, Frassoni made clear this does not bind the Greens to supporting their allies on everything. "For the rest of legislation, we will be free — as also other partners will be free — to decide on the different issues in different ways. It's not like in a national parliament where you have a government which has a fixed support."

Frassoni attributed the green wave to three factors. First, an awareness of climate change that has become more acute over the past year, spurred by a hot summer, October's UN Intergovernmental Panel on Climate Change report and Greta Thunburg's Fridays for Future school climate strike movement. Second, good organisation, leadership and mobilisation from national green parties across Europe that generated strong public support and trust. And finally, she added, "Greens are normally stronger in European elections because people perceive the European challenge as particularly important for us."

At an event hosted by National Observer at the Clean Energy Ministerial Conference last week, the European Commissioner for Research, Science and Innovation, Carlos Moedas spoke about the green wave in Europe and more specifically about his teenage daughter appealing to him to ensure that the environment was his Social Democratic Party’s top priority.

“I think that really shows how important this (tackling climate change) is for European citizens, and for the European youth, and I think the time has come... For me, it’s really the future of our children,” he said at the Vancouver conference.

The European elections are the second largest democratic exercise in the world, after India’s national election. This year's elections saw the highest turnout in two decades, at 50.5 per cent.

'The EU is a force for good'

The Green Party in the U.K. is a staunchly pro-Europe party which advocates for a fresh vote on Brexit.

The country is set to leave the European Union on Oct. 31, after being granted a six-month extension. The withdrawal agreement drafted between the EU and British Prime Minister Theresa May in late 2018 is yet to be endorsed by British Parliament. The prime minister has tried and failed three times.

May will step down as prime minister on June 7, triggering a Conservative Party leadership contest. The new leader will have the option of catapulting the U.K. into a no-deal Brexit, trying to push the beleaguered deal through Parliament for the fourth time, or trying to negotiate a new withdrawal agreement even though the Europeans have repeatedly and explicitly said negotiations are finished.

Remaining in the EU is a pro-environmental choice, according to Dowding. “Unless we have had a massive change to proportional representation and a massive swing to the Greens, I've not got faith that U.K. politicians are ever going to be leaders in tackling environmental issues. Because generally speaking, Europe is more progressive, especially now that there’s a greater number of Green MEPs,” she said.

Environmentalists have warned that a no-deal Brexit, still a possibility depending on the new Conservative leader, would significantly water down British environmental protections.

Dowding says that despite the “mess,” she is optimistic that Brexit can be stopped. “We’ve got to be optimistic. I mean, that's why you go into green politics in the first place... You’ve got to have confidence.”