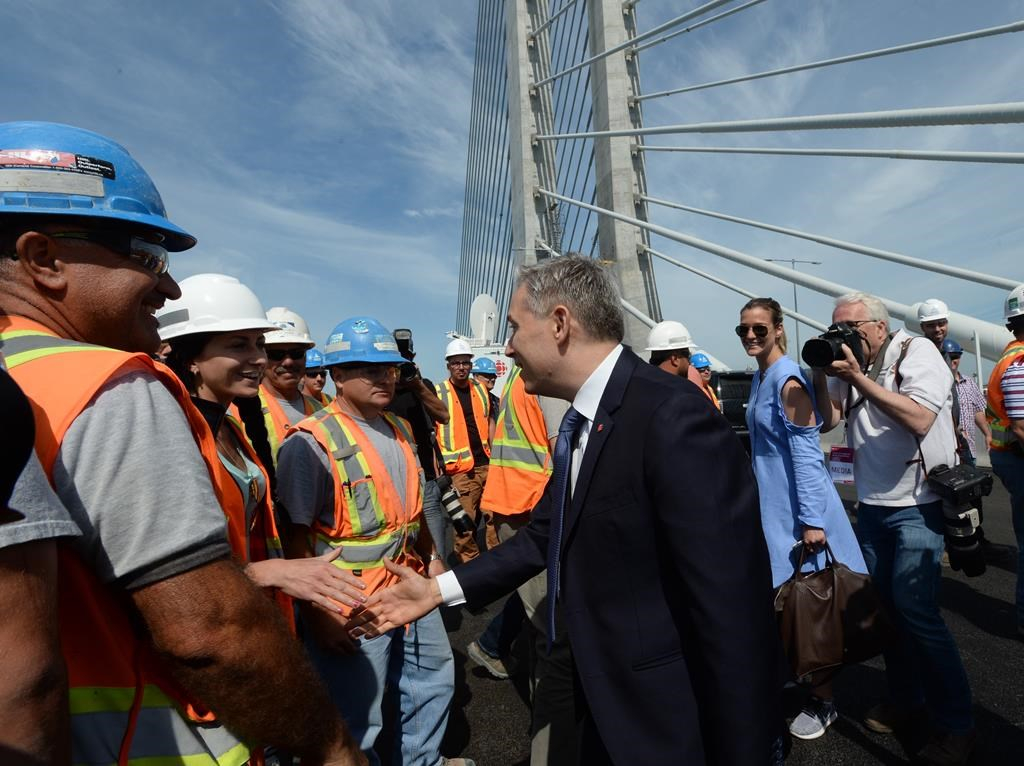 The Honourable Francois-Philippe Champagne, Minister of Infrastructure, participates in the official inauguration of the new Samuel de Champlain Bridge in Montreal, Quebec, on Friday, June 28, 2019. Photo by The Canadian Press/Ryan Remiorz
Previous story

The new bridge — one of Canada's largest infrastructure projects — opened to northbound traffic toward Montreal on Monday, and will welcome southbound traffic as of Canada Day.

The elegant, modern structure is a striking contrast to its crumbling counterpart, long one of Canada's busiest spans. Federal Infrastructure Minister Francois-Philippe Champagne didn't miss an opportunity to make a reference to the predecessor.

The original opened on June 28, 1962, and was to close permanently later Friday.

"If the past has taught us anything, it is certainly the need to build sustainable, modern and quality infrastructure for all future generations," Champagne said.

The new bridge was originally to open last December, but delays pushed back the opening and added another $235 million to the original $4.2 billion price tag.

The bridge was designed for a light-rail system under construction called the REM. Champagne noted that a dedicated path for pedestrians and cyclists will open later this summer on the 3.4 kilometre span that is to remain open all year — providing a first winter link for cyclists crossing the St. Lawrence River.

Champagne and Quebec Transport Minister Francois Bonnardel, as well as the mayors of Montreal and Brossard — communities on either end of the span — were among the dignitaries on hand for the opening, which included an Aboriginal blessing and the singing of the national anthem by a choir.

The stars were some of the more than 2,000 people who built the new span, devoting more than eight million work hours in often difficult conditions.

They were feted by the politicians for their efforts on the complex and demanding construction project.

"It really is a beautiful flower that we've made," said steelworker Jean-Philippe Dube, who didn't hide his pride after three-and-a-half years of work on the bridge.

"It was hard enough because we had big days, lots of hours," said Alex Kaiser, also a steelworker. "With the heavy heat, we drank a lot of water. Winter with the cold was something else."

The bridge was initially proposed by Stephen Harper's Conservative government in October 2011. On hand was Denis Lebel, the former Conservative cabinet minister who spearheaded the project.

Lebel told The Canadian Press he never doubted the project would come to fruition. The original plan was to turn the new bridge into a toll bridge — a decision overturned by the Trudeau government.

But Lebel noted that without a toll, there wouldn't have been a bridge. The toll was key to convincing then finance minister, the late Jim Flaherty, and Harper to greenlight the project.

"As for the toll being removed today, I'll let history judge," Lebel said. "For me the main thing was to build a bridge."

Champagne noted there will be penalties to pay for the bridge coming in six months late.

The matter is the subject of litigation between the federal government and Signature on the Saint Lawrence Group — the consortium led by engineering giant SNC-Lavalin. The contract called for penalties of $100,000 a day for the first seven days and $400,000 for each day that followed.

"I have always said if there are delays, there will be consequences," Champagne said, promising transparency on the litigation and the final outcome.

As for the old Champlain bridge, deconstruction work is to begin next year. It will take about three years to dismantle at an estimated cost of $400 million.