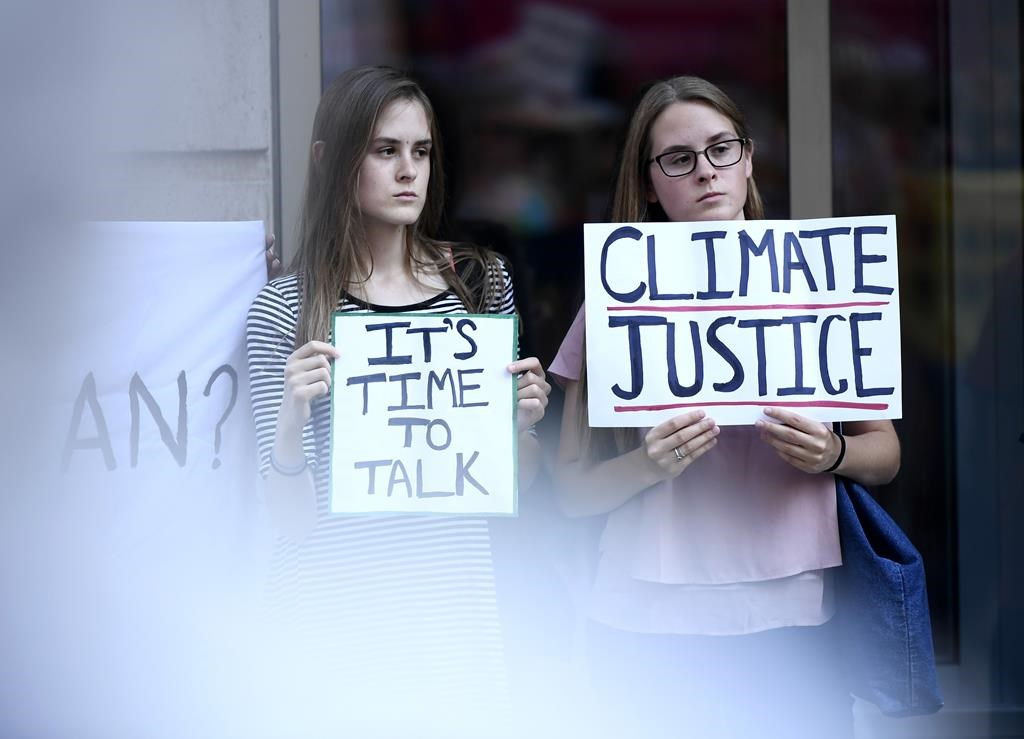 People participate in a rally calling for the CBC to host a federal leader's debate on climate change and a Green New Deal for Canada for the 2019 election, outside the CBC Ottawa newsroom on July 17, 2019. File photo by The Canadian Press/Justin Tang
Previous story

Students in Canada are expected to participate in climate demonstrations beginning this Friday, and some school boards are moving to allow — even encourage — them to miss class for the cause.

The University of British Columbia, the Toronto District School Board and Montreal's Dawson College are among the institutions taking measures to support students who plan to walk out of class as part of a global call to action.

The TDSB said it has asked its schools to avoid scheduling tests and other assignments next Friday, Sept. 27, to ensure students aren't penalized academically for participating in a rally outside the Ontario legislature. However, the board noted students under 18 must still obtain parental permission to skip class.

The board's director of education, John Malloy, said the decision stems from the "large and unique nature of this particular event" and the fact that a number of students have indicated they want to attend, though he could not say how many.

"We see this particular rally as global, as starting from students and generated further by students, and we see it as one that we should consider with parents and with students in terms of their participation," he said Wednesday.

UBC, meanwhile, said students who plan on taking part in the walkout should discuss possible accommodations with their instructors. Similarly, any faculty members wishing to cancel classes in support of the climate action should inform students in advance, the university said in a statement.

"This strike is a student-led initiative and we acknowledge that many of our students and community members care deeply about this issue. It is inspiring to see so many students take part in shaping their future and use the power of the collective voice to raise awareness of climate change and the need for immediate action."

The rallies — dubbed Global Climate Strike — are timed to coincide with the United Nations Climate Action Summit in New York next week.

The movement is partly inspired by Swedish teenager Greta Thunberg, who has staged weekly demonstrations over the past year under the hashtag #FridaysForFuture, calling on world leaders to step up efforts against climate change.

The website fridaysforfuture.org lists more than 100 climate strikes planned in Canada, including events in all 10 provinces and two territories. Thunberg announced on Facebook last week she will be in Montreal for the march next Friday.

Quebec Premier Francois Legault said he wouldn't be on hand, but the province's environment minister, Benoit Charette, and another elected member of the Coalition Avenir Quebec team would take part.

"I don't think its the place of the premier to be there in Montreal, but I've said already if Greta is open to meet me, I'm open to meeting her," Legault said Wednesday in Quebec City.

Thunberg has declined an invitation from Speaker Francois Paradis to address the legislature during her Quebec visit.

Legault did express some concerns about what he called a sudden decision by the Commission Scolaire de Montreal — the province's largest school board — to call a pedagogical day, shutting its schools.

"I think it's too bad that we announced to parents that next Friday — so it's soon — that schools won't be open in Montreal, so they'll have to find someone to take care of their children, so it's last minute," Legault said.

The CSDM announced the cancellation of classes on Tuesday, calling it an "exceptional gesture" stemming from its desire to support awareness of the climate emergency.

Several other boards and institutions also announced they would be cancelling classes on Sept. 27.

Montreal's Dawson College announced in June it would be cancelling classes to encourage students, teachers and staff to take part in the event.

"Sept. 27 is a day to raise awareness about climate change," the junior college said in a statement. "It is not a day off."

"Climate change is one of the most significant challenges of our time, and an important priority for the entire Concordia community," said Graham Carr, the university's interim president, in a statement.

Malloy, the director of education for the Toronto District School Board, said schools will remain open and classes will continue even if some students choose to attend the rally.

"Though we understand that many of our staff might wish to lend their voice to this rally, their obligation is to our schools and we've been clear that staff need to be in school on that day," he said.

— with files from Sidhartha Banerjee in Montreal, Adam Burns in Toronto and The Associated Press