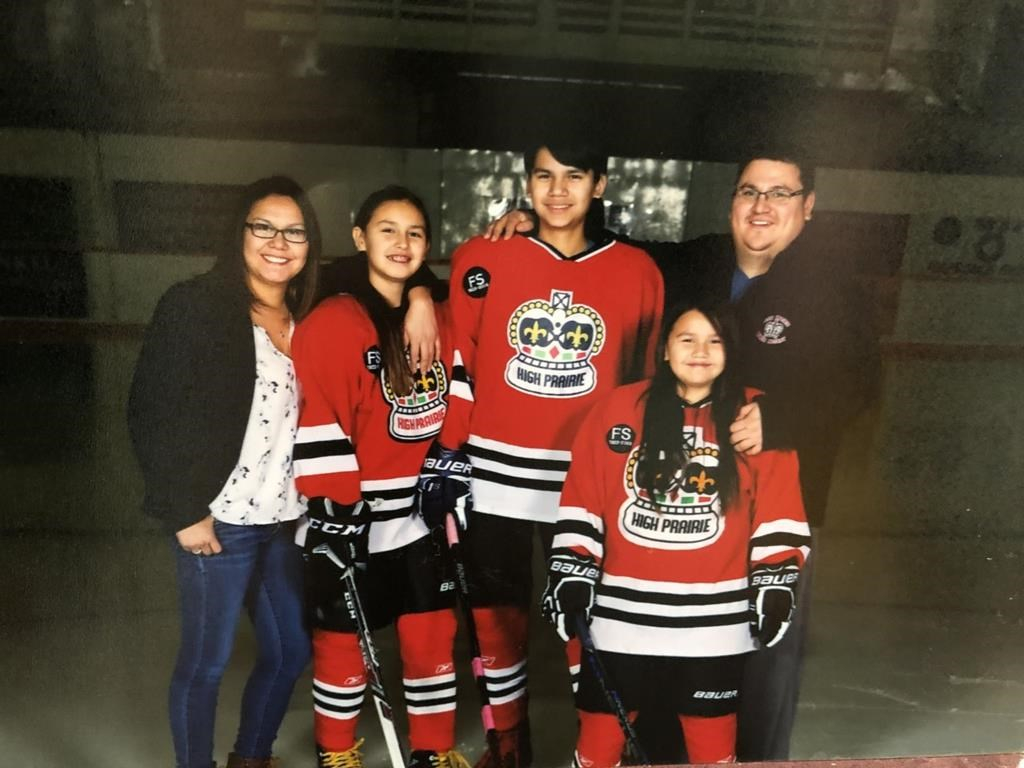 Jennifer Auger wants to continue the legacy of her husband after his death from complications of COVID-19 by opening a group home for at-risk youth in their northern Alberta community.

Shawn Auger, a father of three, died Monday at the age of 34. He is the youngest person in Alberta to date to die of the novel coronavirus.

Jennifer Auger, who was also diagnosed with the illness but had mild symptoms, said Tuesday that her husband was particularly affected because he was asthmatic.

Shawn Auger was involved in youth hockey and worked at the Youth Assessment Centre in High Prairie, Alta., about 370 kilometres northwest of Edmonton. His wife said a position was created especially for him to help youth transition out of the facility.

"That job, he loved it," she said. "He loved it because he got to meet new people, talk to the youth and mean something to them."

She said her husband first went to school to become a police officer and served in various placements, including at the Edmonton Institution, before he decided to work with young people.

"He wanted to work with the youth ... to make a difference, so they didn't end up in jail or anything like that."

Auger said she and her husband recently bought a house in the High Prairie area to renovate and turn into a group home. It's something she plans to continue in his memory.

'What are the chances?' Youth worker one of Alberta's latest COVID-19 victims

Some in the community have already publicly expressed sadness for Shawn Auger. And the Valleyview Jets hockey club is asking people to place hockey sticks on their porches as a sign of solidarity with his friends and family.

A statement identifying him as a COVID-19 victim was issued Monday evening on Facebook by the municipal district of Big Lakes County.

"Big Lakes County is deeply saddened by the news of our first COVID-19 death," the statement says. "We are a close-knit community and this news will be hard for everyone."

Auger said her husband started developing symptoms on March 13 and was diagnosed on March 16 when his test result came in. He was hospitalized shortly after.

Alberta health officials investigated where he had been, she said, but could not definitively say where he contracted the virus.

He was in Edmonton for an National Hockey League game on March 8 and stayed in the city the following day. Officials told his wife that he could have also caught it at his gym.

She said her husband will also be remembered as a jokester who loved hockey and the Edmonton Oilers.

"When he was a hockey coach, there wasn't a weekend when he didn't have a few of our hockey babies," she said. "We called them our hockey babies — girls who would come with us on overnight trips to away games."

He was also vice-president of the area's minor hockey board and organized teams for Indigenous children.

"Through all this, we did not lose Shawn," she said. "We gained a fighting, caring, wonderful angel ... and he is still working from beyond."

This report by The Canadian Press was first published March 31, 2020

All too illustrative of the

All too illustrative of the factors that lead to lethal outcomes. In this case "social distancing" and Northern Alberta Isolation did nothing to stave off disaster. Covid-19 loves crowds, Covid-19 latches on to vulnerability,

Relative youth is no protection. A valuable man has been lost. Everyone who succumbs is an unwitting victim of a mindless foe.