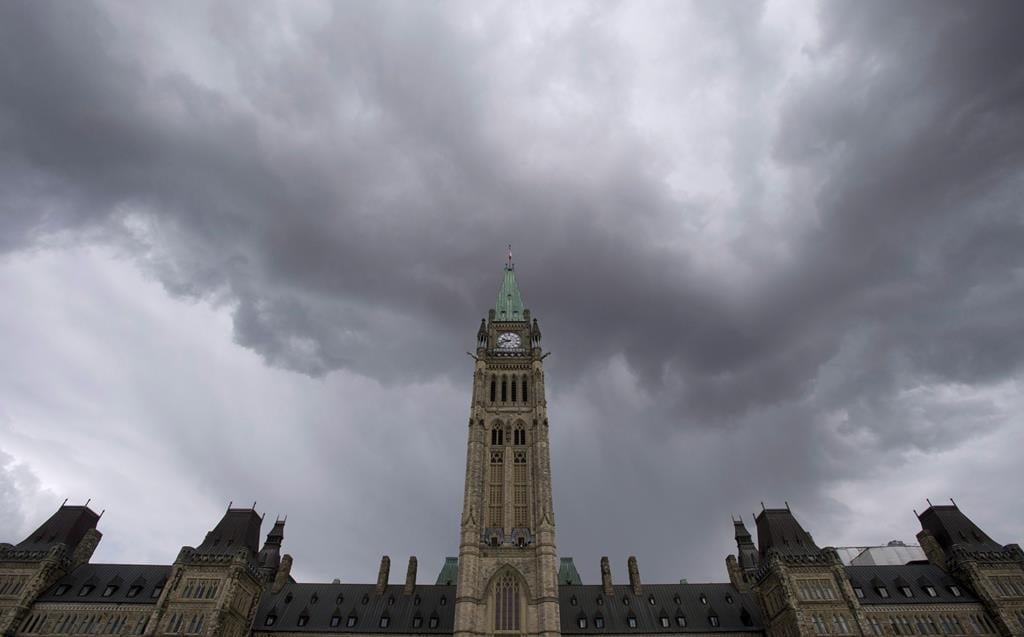 Dark clouds pass by the Parliament buildings in Ottawa on Thursday, May 19, 2016. File photo by The Canadian Press/Adrian Wyld
Previous story
Next story

In war, as the saying goes, truth is the first casualty. In a global pandemic, it seems trust doesn't fare too well either.

At a moment in history marked by social-media snark and diminished public faith in long-standing institutions like government, the mainstream media and the post-war pillars of the rules-based international order, the world is dealing with a critical shortage of both truth and trust at the worst possible time.

And now comes the message that the unprecedented demands on public behaviour — stay home, stay apart, stay clean and stay healthy — will be in place for at least the foreseeable future, straining Canada's economic, social and psychological patience to the limit.

But stay strong, observers say: there's reason to believe COVID-19 could end up putting the "civil" back in civil society.

"At the same time as the governments are saying everyone should physically be apart and distanced, there is a renaissance of communitarianism all around our country, and beyond," said Bob Pickard, a Toronto-based public relations expert and executive communications consultant.

"People are, in many everyday acts of kindness, expressing their sort of pro-local feelings, and they've sort of re-established their connections with their social networks, online and offline. And I think that's very new."

It helps that in both Canada and the U.S., the political sniping has largely taken a back seat to a global war footing against what Donald Trump likes to call the "invisible enemy." But where Prime Minister Justin Trudeau and his lieutenants have been projecting a Team Canada all-in-this-together approach, the U.S. president has not contained his partisan instincts.

At the podium in the White House briefing room, Trump has been in vintage form, whipsawing from occasional presidential decorum and lucidity to fierce claws-out swipes at reporters he considers hostile, all the while touting unproven drug therapies, predicting early returns to normality against the advice of his medical advisers and bragging about his TV ratings.

He tweeted as much on Friday, calling out the Wall Street Journal as "fake news" and describing the ratings for his briefings as "through the roof."

Some have pushed back in the name of public health. Earlier this month, a loose coalition of journalism professors and working reporters wrote to Fox News, the president's preferred cable-news outlet, to accuse it of propagating misinformation and playing down the threat of the virus.

Viewers, however, are looking for something more trustworthy, said Tom Bettag, a U.S. network-news veteran and visiting fellow at the University of Maryland's Philip Merrill College of Journalism.

Trust laid low by COVID-19, but crisis could give 'civil' society new life

Nightly network news broadcasts — think Walter Cronkite and Peter Jennings instead of Wolf Blitzer and Sean Hannity — have been reporting some of their strongest ratings in years, far outperforming prime-time offerings, Bettag said.

"They are not trying to tell people what they want to hear," he said. "They are aimed at doing well-reported, well-edited and fair-minded reporting and leaving the partisanship to the cable networks — and people have flocked to that, as if there's a hunger for, 'Just give me the facts and don't tell me what your opinion is.' "

Bettag also pointed to the bipartisan spectacle last month of Democrats and Republicans in Congress coming together to pass a $2-trillion economic stimulus package, a show of political unity that would have been inconceivable two months ago.

"It's as if we didn't think there was such a thing as middle ground," he said. "Clearly, compromise is possible ... That is refreshing, to say the least."

In both countries, the challenge for government has been exacerbated by mixed messages, a lack of empirical data and persistent reports of ham-fisted handling of the crisis by governments that simply weren't prepared to deal with the world's stealthiest predator, one that has demanded defensive strategies that to many seem inherently contradictory.

By staying home from work and school, the best thing anyone can do is nothing at all, bringing on economic ruin in the name of public health. Going out in public didn't require wearing a face mask, until it did. And in some jurisdictions, like Ottawa, passing someone on a sidewalk is OK but lingering alone in open spaces like a public park can yield a hefty fine.

It's been evident on the global stage, as well. Canada and the U.S., two joined-at-the-hip trading partners that constantly sing the praises of their close economic ties, have been struggling to keep the two-way trade lanes open as push comes to shove over increasingly scarce protective gear like face masks, gloves and gowns.

In some ways, while Canada is nervously watching the virus propagate right next door in the U.S., the fact that Canadians tend to use America as a metric for their own success or failure has perhaps helped to mitigate political division north of the border, said Pickard.

"One thing that unites us is this condescendingly superior feeling towards the Americans. And I think Canadians are basically assessing or weighing the quality of our coronavirus response by comparing us to the Americans," Pickard said. "If it weren't for that Canadian cultural peculiarity, I suspect that things would be more divided here than they have been."

In the U.S., the litmus test will come Nov. 3, when voters head to the ballot box to choose between Trump and Joe Biden, the presumptive Democratic nominee now that Bernie Sanders has ended his progressive, populist bid to challenge the president.

No one is holding their breath — yet — about whether Americans will emerge from the pandemic more willing to contemplate the other side of the partisan divide.

"Sometimes it takes the worst-case scenario to make people have that come-to-Jesus meeting — maybe this is it," said Dr. Allen Zagoren, a surgeon and professor of public administration at Drake University in Des Moines, Iowa.

"Ask me on Nov. 4 whether we learned the lesson in this country."

This report by The Canadian Press was first published April 12, 2020.