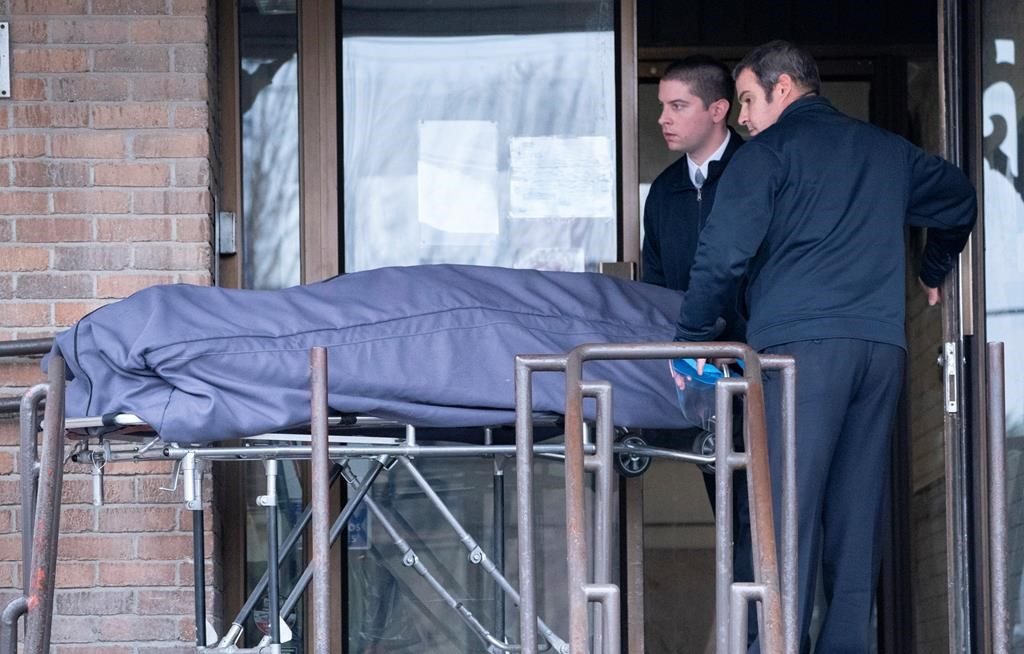 A body is removed from the long care home Yvon-Brunet in Montreal on Monday, April 13, 2020. Photo by The Canadian Press/Paul Chiasson
Previous story
Next story

The number of deaths in long-term care facilities is expected to keep rising, even as the growth of overall COVID-19 cases begins to slow, Canada's top public health official warned Monday.

Dr. Theresa Tam, the chief public health officer, said the spread of the virus in nursing and retirement homes has been at the root of half of the more than 700 deaths across the country.

"Even as the numbers of cases slows down the number of deaths, unfortunately, are expected to increase," Tam said at a media briefing in Ottawa.

Last week the federal government released its projected trajectory for the outbreak. The total number of deaths projected in Canada — between 4,400 and 44,000 in the best-case scenario — was based on a fatality rate of 1.1 per cent.

On Monday, Tam said that fatality rate is expected to rise given the outbreaks in long-term care homes across the country.

The news follows a gruesome weekend discovery in a private long-term care home in Dorval, Que., where police are investigating the deaths of 31 people since March 13. Five of the deaths have been definitively linked to COVID-19.

But Quebec is not alone in its struggle to contain cases in seniors' and long-term care homes, Tam said.

"Almost all jurisdictions are essentially trying to deal with the outbreaks at long-term care facilities," she said. "That's really across the board."

Twenty-nine residents in a 65-bed nursing home in Bobcaygeon, Ont., have died amid the pandemic. Eighteen deaths at North Vancouver's Lynn Valley Care Centre have been attributed to COVID-19. Other facilities from coast to coast have had outbreaks and in many cases numerous workers have been sickened as well.

While provinces and territories are ultimately responsible for their own public health response to the pandemic, federal Seniors Minister Deb Schulte highlighted new federal guidelines for all care homes in the country to try to stall the spread of the virus in other facilities that care for vulnerable people.

She said long-term care homes are at particular risk, not only because of the older populations they serve, but also communal living spaces and the number of people who come and go.

Residents are exposed to visitors and health-care workers who travel from facility to facility in some cases.

"Providing consistent guidance for long-term care homes across the country will save lives," Schulte said Monday.

The non-mandatory guidelines, developed in tandem with provincial and territorial health authorities, lay out how those risks can be mitigated.

The suggestions include limiting visitors, screening workers at the beginning of each shift and screening residents daily.

They also suggest limiting the number of homes workers serve to just one, where possible.

Some provinces, including Ontario, have already instituted similar measures. Ontario has so far reported outbreaks in 89 care homes, leading to 120 deaths as of Sunday.

Premier Doug Ford said he knows from experience how difficult the restrictions on family visits can be, but said they are necessary.

Ford's mother-in-law is in a long-term care home, and Ford said it is heartbreaking to watch his wife, Karla, stand outside in tears.

"It’s heart-wrenching, but we have to rely on our medical professionals."

As for why federal guidelines are being released weeks after the first long-term care home outbreak was reported in British Columbia in early March, Tam said it took time to draw on the expertise needed to draft them.

She said the guidelines are the result of expert input from long-term care workers, infection-control experts, lessons learned from provincial health authorities, and recently accepted evidence about asymptomatic transmission.

Those guidelines are likely to change as the epidemic continues to unfold in Canada, she said.

Meanwhile provinces are "stepping up" to support long-term care homes and their workers, Schulte said, by providing funds for them to implement better protections against the virus.

She said B.C. has provided $10 million, Quebec has pledged $133 million and Ontario has said it will spend $243 million to enhance infection-control measures in their respective centres.