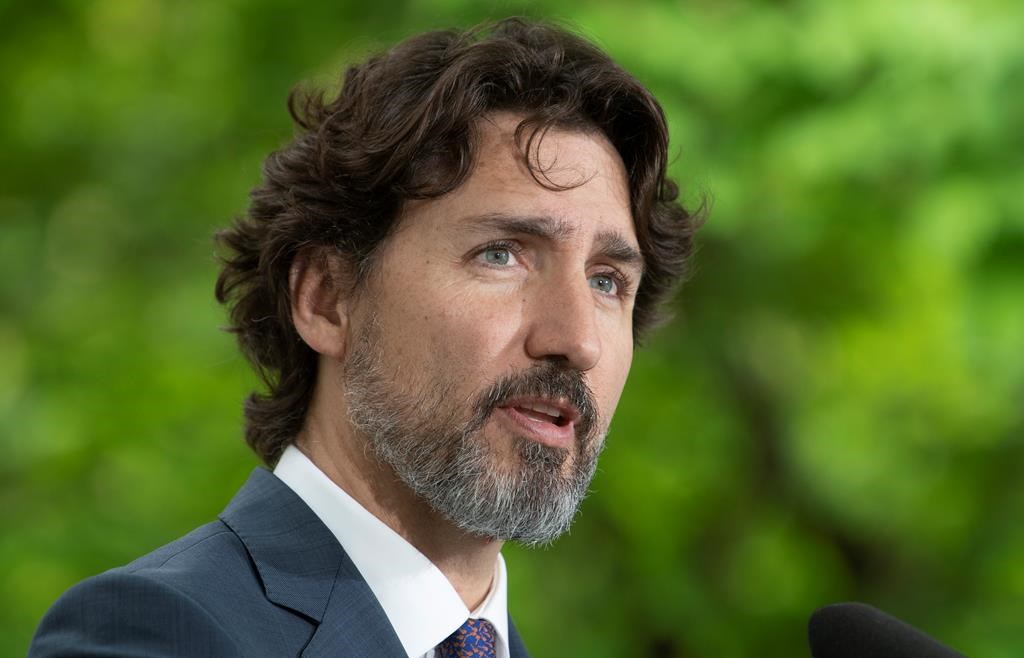 Prime Minister Justin Trudeau responds to a question from a member of the media on site during a daily news conference outside Rideau Cottage in Ottawa, on Monday, May 25, 2020. Photo by The Canadian Press/Adrian Wyld
Previous story
Next story

Canada's most populous province, one of the hardest hit in the pandemic, had been contemplating letting more than one family to link up in so-called "bubbles" and allowing gatherings of more than five people.

But Ontario Health Minister Christine Elliott said Monday that the province's top doctor is reluctant to loosen those rules yet.

"There is a concern with people creating groups that are too large," she said.

"It was like a rock concert without the band," he said Monday.

But he said the recklessness on display at Trinity Bellwoods was not a reason to reinstitute some of the restrictions already removed.

"I'm not going to punish the whole province because a group of people in Toronto ended up getting together," he said. "Like, 99.9 per cent of the people are phenomenal."

Ford encouraged anyone in the Trinity Bellwoods crowd to "do us all a favour" and get tested for the virus.

However, the province's associate chief medical officer later said she recommends they watch for symptoms for 14 days and avoid coming into contact with high-risk people.

Ontario reported more than 400 new COVID-19 cases Monday for a fifth straight day, after posting daily growth numbers in the 200s and 300s earlier in the month. It has now seen growth rates of between 1.5 and 1.9 per cent for 16 of the past 17 days.

Elliott said the rising numbers were likely due to Mother's Day gatherings that flouted official guidelines. Ford himself has admitted that two of his daughters who don't live at home visited that weekend in a group of at least six people.

The premier added officials will be keeping a sharp eye on the numbers and it's too soon to say how they could play into Ontario's future reopening plans.

"Everything's on the table, but we're very cautious," he said. "As soon as we see these numbers climb a bit, you get a little gun shy."

In Ottawa, Trudeau said Canadians will have to keep adjusting their routines as the weather warms up.

"Our approach will have to be tailored to each community," he said.

"That means the rules and public health recommendations you're asked to follow may be different depending on where you live and that can be confusing."

But Trudeau said no matter where they live, everyone has the responsibility to try to stay two metres away from others, and wear a mask in public when physical distancing isn't possible.

Non-essential retail stores in Montreal opened Monday for the first time since March. That was three weeks later than shops outside the hard-hit city.

Dozens who lined up outside a downtown Zara clothing outlet were greeted by masked employees and a hand-sanitizing station.

Zuleyha Sen was shopping for her nearly eight-year-old son, who had outgrown his clothes. Online orders have been delayed due to the pandemic.

"I won't go in for a long time, I'm just hoping to grab several things," she said.

Out West, in Calgary and the city of Brooks in southeastern Alberta, restaurants, bars, hair salons and barbershops that had been left out of Alberta's first reopening phase were also allowed to resume on Monday. The delay in those cities was due to a high number of COVID-19 caseloads.

Meanwhile, Trudeau said he'll push the provinces to give workers 10 days of paid sick leave a year — a measure the federal NDP has been urging to ensure no one has to choose between coming to work sick and losing income.

NDP Leader Jagmeet Singh said the move was a good first step, but he wants to see more action before his party will agree to suspend full sittings of the House of Commons through the summer.

— with files from Allison Jones in Toronto, Morgan Lowrie in Montreal and Lee Berthiaume in Ottawa.

By Salmaan Farooqui | News, Politics | May 25th 2020
Coronavirus in Canada

Doug Ford’s claim that 99 percent plus of Ontarians are
doing the right thing is a perfect example of an uninformed politician throwing numbers around that are meant to sound like statistics; the ones that he wants to be the reality. Sadly they aren’t. A quick scan of this neighbourhood might result in somewhere south of 50 percent doing what would be necessary to return us to a steady decline in Ontario. It is large gatherings, huge bubbles, unnecessary travel and general carelessness around people with a high exposure risk. It would be essential that Doug Ford follow BCs example and allow public health experts to guide the recovery. Fords “instincts” are disrespectful and dangerous to front line, essential, first responders and those who thankfully have been able to return to work where it’s been safe to do so. And so disrespectful to those who’ve made brave sacrifices like the snowbirds crew member and front line staff lost to Covid 19. Some sort of patient thoughtful leadership is needing Ontario.