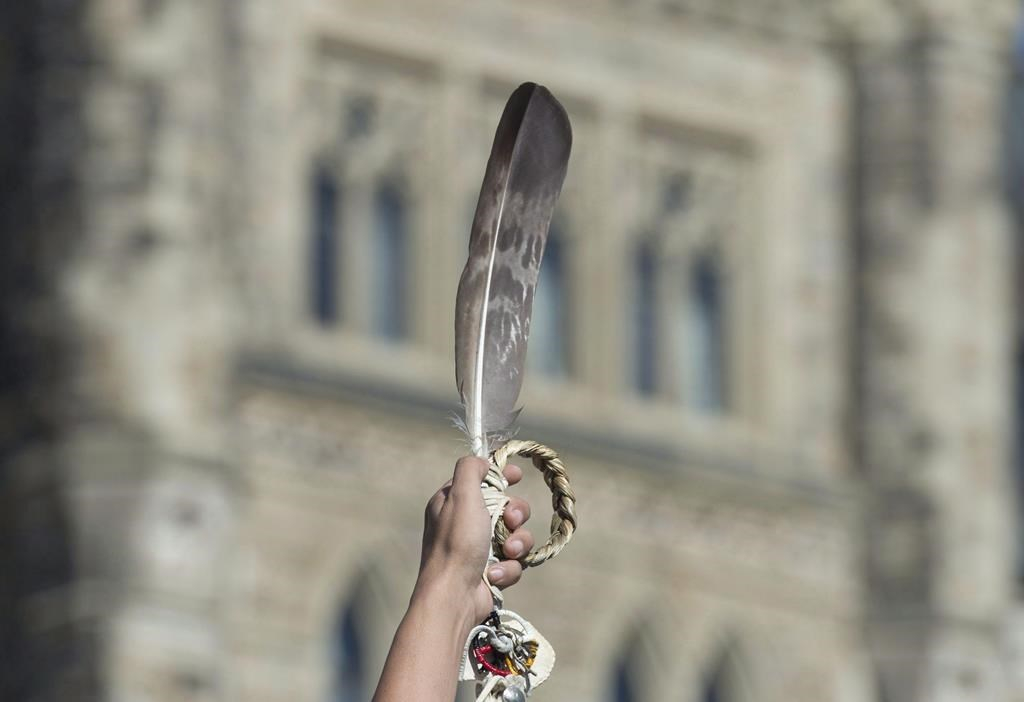 An eagle feather is held up during a rally for Missing and Murdered Indigenous Women and Girls on Parliament Hill in Ottawa on October 4, 2016. File photo by The Canadian Press/Adrian Wyld
Previous story
Next story

It was Sonya Nadine Mae Cywink's 31st birthday when she went missing in Ontario in mid-August of 1994.

She was with child.

She had been planning to celebrate her birthday by meeting her sister, Meggie Cywink, at a Toronto Blue Jays game. But she never showed up.

Eleven days later, her body was found at the Southwold Earthworks National Historical Site, south of London, Ont., wearing only a T-shirt and socks. Her cause of death was described as blunt force trauma.

"Obviously, my grief, and the anxiety of never knowing what happened in the final moments of Sonya's life have haunted me," Cywink said Wednesday.

She expressed her disappointment that the massive three-year effort of the National Inquiry on Missing and Murdered Indigenous Women and Girls has not led to change.

"Families, communities, and allies have not received any information about what governments — either federal or provincial — have been doing over the past year on this file," she said.

"I can tell you that, whatever it is, it has had little or no impact on the families left behind," Cywink said. "It has brought us no solace and it has not changed the violence we witness or the genocide we survive."

The inquiry delivered its final report June 3, 2019, concluding that decades of systemic racism and human rights violations had contributed to the deaths and disappearances of hundreds of Indigenous women and girls and that it constituted a genocide.

In a report card released Wednesday to mark the anniversary of final report's release, the Native Women's Association of Canada found little has been done to address the inquiry's 231 calls for justice in the last 12 months. It awarded the federal government a "resounding fail" in the four broad categories of human rights under which the inquiry made recommendations: health, security, culture and justice.

"Instead of a national action plan, we are left with a lack-of-action plan," said association president Lorraine Whitman.

It was Sonya Nadine Mae Cywink's 31st birthday when she went missing in Ontario in mid-August of 1994. She was with child.

"The sad fact is, we cannot afford to do nothing in the face of the violence that continues to take the lives of First Nations, Metis and Inuit women."

Last week, Crown-Indigenous Relations Minister Carolyn Bennett said Ottawa is delaying its intended release of the national action plan this month because of the COVID-19 pandemic.

Whitman said using the pandemic as an excuse for not delivering a plan is a "double slap in the face" to Indigenous women who are facing even greater risks of violence because of isolation measures aimed at slowing the spread of the novel coronavirus.

"These are things we have been trying to tell the government, but they have not been doing much listening," Whitman said.

On Wednesday, Bennett acknowledged these concerns, but also said a national action plan is not just up to Ottawa to craft. It must also involve commitments and reforms within provinces and territories — something that was highlighted in the inquiry's final report.

"Some people think that this was a federal inquiry. It was the first-ever national public inquiry so it requires that kind of inter-governmental work that is never easy, shall we say," Bennett said in an interview Wednesday.

"The commission report insisted (the response) be regionally relevant. We will work with them provinces and territories in order to get the best possible national action plan we can."

In a joint statement Wednesday, the national inquiry's four commissioners said they "deplore inaction on the part of some governments."

"As the final report asserts, the calls for justice are not mere recommendations or a quaint list of best practices — they are legal imperatives rooted in Canada's obligations under international and domestic human rights norms and laws," the commissioners said.

Chief commissioner Marion Buller is among many calling for transparency.

"I would like to see all governments, not just the federal government, be transparent about what they've done to date and what they plan on doing moving ahead. I think all Canadians deserve that transparency," Buller told The Canadian Press earlier this week.

Bennett would not commit to a timeline, but she did point to a federal website launched Wednesday that lists what she calls "concrete actions" taken across federal departments to date on addressing some of the issues identified by the inquiry.

The inquiry commissioners are also calling on the federal government to establish an ombudsperson and tribunal — as per one of the recommendations — to ensure oversight into governments' work on the implementation of the calls for justice and to ensure full participation of families and survivors.

Bennett said this would require provinces and territories to agree to an independent office having jurisdiction within their respective governments, which was also needed for national inquiry. But she didn't rule it out, saying this is "something that would be discussed."

NDP Leader Jagmeet Singh called it "completely wrong" that a year has passed and Ottawa has not yet completed a national action plan.

"The government doesn't need to plan this out and find the best time to do it," he said.

Bennett committed to continue working with all partners, pointing to the need to establish indicators and metrics to measure progress.

"I'm very optimistic that we will not let these families and survivors down, we will get this done and we will continue to work across all government departments to keep going."

This report by The Canadian Press was first published June 3, 2020.

It seems quite simple but at

It seems quite simple but at the same time complex to meet the expectations of the MMIWG commission survivors.
It is no easy task to alter the all too human reactions of fear and aggression that characterize the relatioships between the varied "tribes" of humanity. We are encoded with the fight or flight instinct and it takes great effort to overcome that - especially when too many people purporting to be leaders or gurus have made a point of twisting this survival instinct as a means of power and control.

To effect change we need to break down the problem into manageable chunks of change.

Every person engaged in the protection/peacekeeping/justice system has to be purged of their own fears/aggression in order to deliver on the oaths they have taken. These people are the veritable pointy end of the "tribal conflict" and our need for social justice can no longer tolerate the rogue elements who pursue power within the system as a means of securing their own wellbeing at the expense of others. Given the nature of humans this is a huge systemic/biological barrier to eliminate.

We need our politicians to stop pandering to the "special interests" who demand their own particular interests take precedence over all others. We need these "special interests" to be prevented from exerting bribery, blackmail, and similar malice on our representative and responsible governance structures.

We certainly need to re-imagine education as a means to reducing the fear/aggression dynamic that has dominated our existence on this planet. What good is knowledge if it does not include emotional maturity?

Prevention as opposed to enforcement needs to be the focus of civil and social management. If we cannot eradicate human evil we must do a better job of dealing with it. There are workable models out there that have not been universally adopted and desperately need to be examined in our increasingly over-crowded, and fraught species. If we cannot manage this we will extinguish ourselves.

Most of this is well documented from faith leaders, from scholars, from people engaged in the daily struggle to keep humanity from imploding.

What keeps humanity going is hope. When hope can no longer survive, we are done.