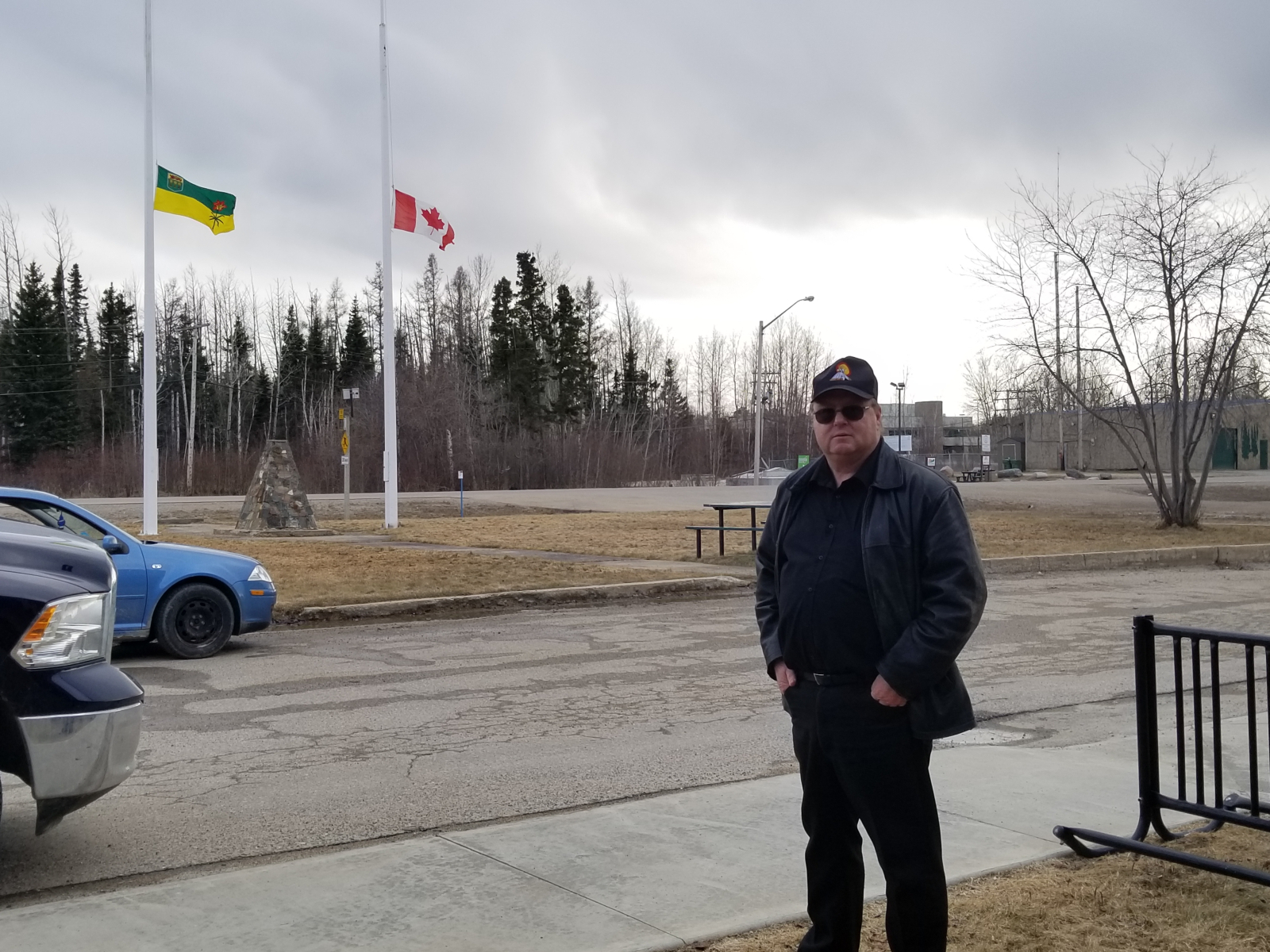 La Ronge mayor Ron Woytowich is now looking at other options to continue a winter shelter program in his town. Photo by Michael Bramadat-Willcock.
Previous story

La Ronge town council rejected a bid to approve a new location for a homeless shelter downtown in a 4-1 vote Wednesday night.

The vote followed pressure from six local businesses that say the main drag is not the right place for social services.

La Ronge Mayor Ron Woytowich manages the shelter in his capacity as executive director of the Kikinahk Friendship Centre.

“I’m totally depressed right now. We have to have a shelter in place by November 15th and we do not have a place to do it,” Woytowich told Canada’s National Observer after learning the results.

The shelter is already on La Ronge Avenue, housed in a co-existent capacity with the Scattered Site outreach program, which provides support for mental health and addiction issues among the homeless during the winter.

Woytowich said this winter will be different because the building is in such disrepair that it can’t operate as a shelter. Approval of the old SaskPower building nearby would have allowed the shelter to relocate and stay open.

“It’s not the actual location that I’m opposed to. It’s anywhere in the downtown core in the retail sector. La Ronge Avenue in particular,” Electric Waves owner Brent Pajunen told the council.

“Who submitted all of these letters to the media? It has to be mayor or council… It puts a lot of distrust in (the) council,” Brent Pajunen.

“We’re very limited in the amount of buildings we have there now. I don’t feel that we should be using them for temporary shelters,” Pajunen said.

Pajunen said he would approve a location that isn’t on the main business street. “You could literally put it in my backyard.”

When asked for an alternate site, Pajunen recommended the nearby Cree reserve.

“The new wellness centre that the Lac La Ronge Indian Band is building right now, a wing on there probably would be a perfect place,” he said.

But Woytowich told Canada's National Observer that only 40 per cent of clients at the emergency shelter are members of that community.

The treatment facility, spearheaded by Lac La Ronge Indian Band Chief Tammy Cook-Searson, is expected to be complete in October 2021.

Documents obtained and first reported by Canada’s National Observer include six letters penned by members of the local business community requesting the motion to approve a shelter on La Ronge Avenue be rejected.

“Who submitted all of these letters to the media? It has to be mayor or council… It puts a lot of distrust in (the) council,” Pajunen said.

“It does meet the requirements of your zoning bylaw, which we’ve identified in the report before council. We’re recommending approval based solely on your bylaw,” Yaremchuk said.

Councillor Jordan McPhail, the only member of the Lac La Ronge Indian Band in that position, appealed to members to approve the shelter because of the coming winter.

“Being this late in the year... very, very rarely does a council get to see the opportunity to have a life and death situation before us. This is one of those motions. This is a motion where we are going to have the discussion over whether people might be staying out in the cold this winter or whether they will have safe, warm and dignified places to sleep,” he said.

And he addressed concerns raised by local business owner Scott Robertson in a letter urging council not to approve a shelter over an “image problem” in downtown La Ronge.

“La Ronge used to have an image problem and that was (when) we didn’t have a shelter for people and people froze out in the cold,” McPhail said.

“Somebody stepped up and provided that much-needed service in our community and we are now faced with a decision to allow them to continue or not.”

He said that approving a shelter would help the town’s image, not hinder it.

“All I can say is that if we vote this down … then the image of La Ronge is that we are willing to potentially put the homeless population out in the cold this winter,” McPhail said.

McPhail said that council had previously approved shelters in the downtown core.

Councillor Matt Klassen said he’s all for having a shelter downtown, but not on the main business street.

“I do think that a shelter should be somewhere in the downtown core so that these individuals that are less fortunate can access the services that they need,” Klassen said.

“That being said… I think main street should be reserved for the businesses. For the shops and for retail and for restaurants, not for social services.”

Councillor Hugh Watt stressed the vote was solely on the location of a shelter, not whether or not one is needed.

“I don’t think it’s the intention of council to throw anybody out into the cold,” Watt said.

He said considering that six owners of businesses on La Ronge Avenue expressed concerns over the proposed location, council should take their opinions seriously.

Klassen agreed saying that while the town has previously allowed a shelter in the downtown core, there was no opposition to it. He said residents and local property owners must be listened to.

“Those are the people that put us in these chairs.”

Councillor Dallas Everest, who according to his council profile moved to La Ronge when he bought the KFC franchise on La Ronge Avenue, declared conflict of interest and didn’t vote.

Everest confirmed to Canada’s National Observer after the meeting that he still owns the KFC building, but no longer owns the franchise.

“There was a letter that was leaked before this council meeting so now it’s perceived that I might have a financial gain in this. Which I don’t see how I would. I don’t know if (a shelter on La Ronge Avenue is) going to increase or decrease the value of property,” Everest said before stepping out during the vote.

“I strongly feel that placing a shelter in a highly valued commercial and business district will potentially decrease property values, reduce sales for current businesses, and deter future development of retail space,” Everest wrote in a joint letter to council with his wife, Chamber of Commerce president Crystal Everest.

McPhail told Canada’s National Observer after the vote that he’s disappointed with the council’s decision and reminded residents that council elections are pending.

“November 9 is coming up soon and I would hope that every person that runs for council or every person that wants to represent their community in the best interests of it is acutely aware that there’s more than six people that put us in those chairs,” McPhail said.

“We’re a community of almost 2,800 people and every single one of those has an equal voice and an equal vote.”

Regular Meeting of Council - August 26 2020. Video provided by the Town of La Ronge.

Woytowich said clients at the shelter need to stay downtown. He’s considering options to buy a motel as a solution to the problem.

“Our clients are homeless, they don’t have vehicles. They also have mental health and addictions problems that require treatment every day.”

He reiterated if a solution isn’t found, that could have deadly results.

“I know that every year before we ran the shelter, people froze to death in the winter. When we opened nobody froze,” Woytowich said.

If you have information that you would like to share you can reach out to [email protected] to make arrangements for a secure file transfer.