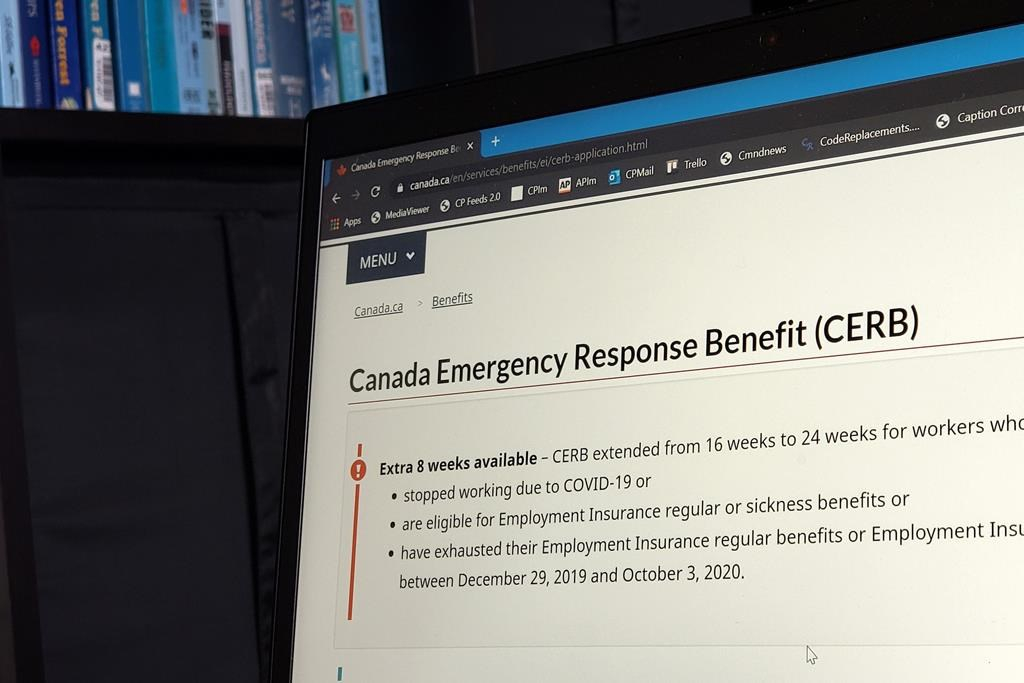 The landing page for the Canada Emergency Response Benefit is seen in Toronto, on Monday, Aug. 10, 2020. File photo by The Canadian Press/Giordano Ciampini
Previous story
Next story

A breakdown of applications for the simplified EI program shows that overall there had been more than 1.5 million claims as of late this past week, among them 1.15 million people who were automatically transferred when their emergency benefit ran out.

The figures are enormous for a system that in one day this month handled 246,000-plus claims. In the spring, officials worried the 87,000 applications on one March day would make the decades-old system burst its seams.

Figures obtained by The Canadian Press also show that more than 84 per cent of applications had been processed, which experts who reviewed the numbers noted was a positive sign for the transition off the Canada Emergency Response Benefit, better known as the CERB.

Couple that with the more than 300,000 people who turned to a suite of new benefits on the first day they were available, and the figures provide a hint at the ongoing need for income support even as employment has picked up.

Figures on claims can be "valuable in providing a partial, real-time assessment" of the impact COVID-19 has on the labour force, officials wrote to Employment Minister Carla Qualtrough in April.

At the time, they were writing in a briefing note about providing regular updates on CERB recipients and payments as "the labour market landscape continues to evolve across the country.”

The Canadian Press obtained a copy of the briefing note under the Access to Information Act.

The CERB ceased to exist on Oct. 3, although people can still retroactively apply for CERB payments until Dec. 2. The government expected up to four million people would use the revamped EI and three additional benefits for those not EI-eligible.

Up to 2.8 million people would need EI, based on internal projections from the department that oversees the program. About one million more would likely need the three new benefits.

On the first day it was available this past week, 240,640 people applied for the Canada Recovery Benefit. By that same Monday, a further 107,150 applied for a caregiving benefit and 58,560 applied for the new two-week sickness benefit, both of which had opened for applications the previous week.

The Canadian Centre for Policy Alternatives had estimated about 5,000 people would use the taxable sickness benefit. Its senior economist David Macdonald said the vastly higher number suggests some EI-eligible workers may have found it easier to apply for the sickness benefit.

"There will be plenty of honest confusion among people as to where they might apply next, and they might take the path of least resistance, which is going to be these (recovery) programs," said Macdonald, who has closely tracked aid figures.

Mikal Skuterud, a professor and labour economist at the University of Waterloo, said there may also be people who are EI-eligible but apply for the CRB because of other differences in the programs, such as how quickly benefits are clawed back, how long they last, and how much tax is taken off at the source of payments.

"There are some big issues there, but that's kind of unfair to criticize the government because designing these kinds of income-support programs for self-employed people is a quagmire," he said.

The first EI payments went out this week, with just over 84 per cent of applicants receiving benefits, a figure experts noted as positive.

The labour market has recouped about 2.3 million of the three million jobs lost when the pandemic first struck. A new round of restrictions amid rising COVID-19 case counts threatens some of those gains.

Given the unknown future path of COVID-19, Scotiabank senior economist Marc Desormeaux said the government will have to be very careful about when it winds down the pandemic benefits.

"We want to try and recover more quickly to the extent that we can, because these things have a way of reinforcing themselves," he said in an interview.

"At this point, we're comfortable with these (benefits) being in place, just to provide that certainty and a cushion against potential second-wave impacts."

This report by The Canadian Press was first published Oct. 17, 2020.

A new abnormal with Molly Jong-Fast, purveyor of blunt truth and dark humour for a world in chaos