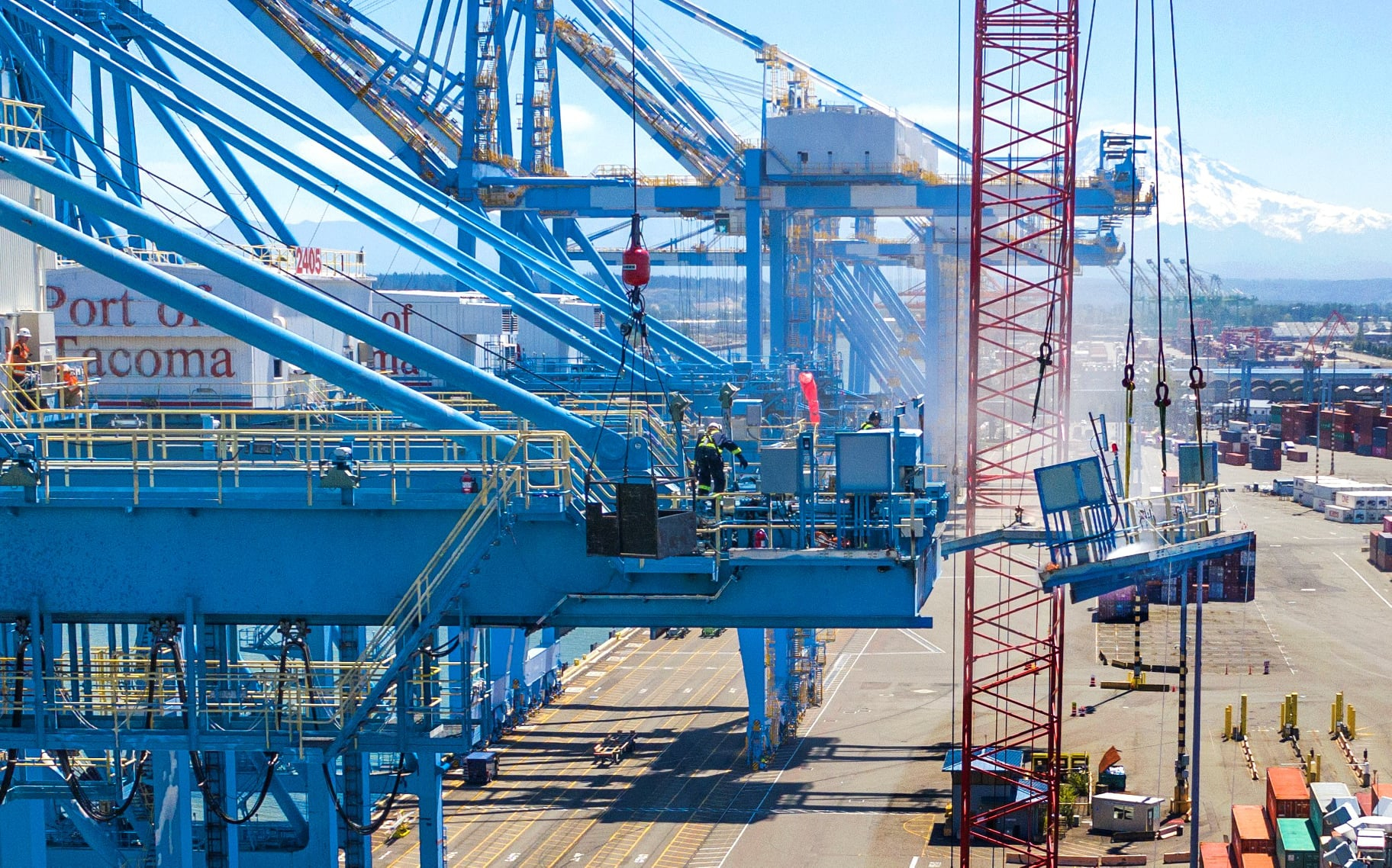 The Port of Tacoma, in Washington state, where the Tacoma LNG project is being built. Photo Port of Tacoma/Facebook
Previous story
Next story

Public-sector pension plan managers in Canada are being asked to explain their investments in an energy company building a new fossil fuel facility on the West Coast.

The US$310-million liquefied natural gas facility, called Tacoma LNG, is being built at the Port of Tacoma by Puget Sound Energy (PSE), a utility in the state of Washington, and is expected to be completed next year.

Proponents of the facility, like the utility, the port and a union working on the project, hope that it will spell the end of the dirty diesel or bunker fuel that ships usually use. These fuels emit harmful air pollutants like sulphur dioxide, nitrogen dioxide and particulate matter, as well as pollute port waters.

But the project has attracted considerable controversy. Washington Gov. Jay Inslee has come out against it, saying he “cannot in good conscience” support its construction given the scientific consensus around the impacts of natural gas production and distribution.

As well, the Affiliated Tribes of Northwest Indians has passed a resolution against the project. The Puyallup Tribe sees it as a threat to its lands and waters and has led protests against the project, saying it wasn’t meaningfully consulted.

Advocacy group Shift: Action for Pension Wealth and Planet Health says it’s time that Canada’s biggest public pension fund and three other large public pensions in Canada explain why they are continuing to hold interests in the utility behind the LNG project.

“Canadian pension funds can’t credibly claim to understand the financial risks of the climate crisis at the same time that they're investing in the expansion of fossil fuel infrastructure,” said Patrick DeRochie, pension engagement manager at Shift.

“Financing the expansion of any fossil fuel infrastructure is incompatible with a safe climate future and a healthy retirement for anyone.”

The Canada Pension Plan Investment Board (CPPIB) owns 32 per cent of Puget Sound Energy, one of a number of holdings of large-scale infrastructure firms around the world. Senior principal Christopher Hind is listed as serving on the boards of Puget Sound Energy and Puget Energy.

The British Columbia Investment Management Corporation (BCI) said in 2018 that it would hold a 20.9 per cent interest in Puget Sound Energy, calling it a “well-managed, quality core infrastructure company.” Senior portfolio manager Richard Dinneny is also listed as serving on the boards of Puget Sound Energy and Puget Energy.

“Canadian pension funds can’t credibly claim to understand the financial risks of the climate crisis at the same time that they're investing in the expansion of fossil fuel infrastructure,” said Patrick DeRochie with @ActionShift.

All four pension funds told Canada’s National Observer that they will be declining comment.

In addition to natural gas, Puget Sound Energy says it is the largest utility producer of renewable energy in the Pacific Northwest, and supports both wind and solar infrastructure.

“It’s critical to ensuring we can serve our customers at times of peak usage — on the coldest days of the year — and will also play a key role in creating the greenest shipping fleet on the West Coast,” said Padula.

The four pension funds managers are large, diversified global investors, all members of the “big eight” major Canadian public pensions. Each show more than $100 billion of assets in their annual reports, distributed across a wide range of classes like infrastructure, renewables, real estate and private equity.

The four also all make mention of climate change in their investment approaches. CPPIB has said it requires “bottom-up analyses of climate change risks and opportunities.” BCI promotes integrating “climate considerations into every investment decision.” OMERS considers it a “fiduciary duty to address climate-related financial risk.” AIMCo says it hopes to “drive more effective climate-related engagement between companies and investors.”

The port has argued that LNG, while an “imperfect solution” to the challenge of climate change, still “represents a significant improvement” over bunker fuel. “We appreciate the desire to move our economy beyond fossil fuels, but at this moment in history, there exists no real-world alternative to fossil fuels for powering these vessels,” the port wrote in response to Inslee’s opposition.

But DeRochie said this argument represents a discredited position that using natural gas can be a bridge to a low-carbon economy. The oil and gas industry contributes significantly to emissions of methane, the primary component of natural gas. Methane concentrations in the atmosphere are making climate change harder to fight. Reports show methane emissions are much higher than previously thought.